Lakatoi
Into the Deep Blue


Jim's Comment: Alan (hy-brasil) has penned another fascinating post. He is a longtime worldwide collector and a former employee of the philatelic auction business. He also contributed the article on the 1922 pictorial Issue of Armenia on April 15, 2021. Jim's Note: My original Papua post is here.

A lakatoi (or lagatoi, closer to the usual pronunciation) was the iconic multihulled craft of  Papua New Guinea . It was made up of two or more large canoes lashed together with a platform and housing added, and was used to carry trade goods packed in the canoe hulls. 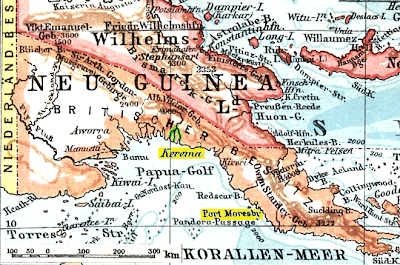 It was used by the Motu people that lived around the Port Moresby region, (see map) in the Hiri trade cycle. They would create pottery and items made from seashells to trade with people north along the Gulf of Papua , a voyage of up to 200 miles or so. Since when is a very good question. Sources say the practice was traditional and it could date back to more than 2500 years ago. It continued until the 1950s.

The trade winds would take lakatois northwest in October/November as far as the Purari River delta area (bright green on the map above) west of Kerema. The Motu would mostly trade for sago, the slow-growing palm-like tree that you might find in gardens in warmer spots elsewhere in the world.  Its spongy center is made into a starchy flour, a staple in short supply back in the Motu homelands.

The trading would be done quickly enough, but traders had to wait until the monsoon winds changed around January to take their sago home. During this time, they rebuilt their boats larger, since sago was a much bulkier cargo. So they would also trade for  more canoes, with up to 14 hulls reported used for one lakatoi, though more often it was four to six total for the return trip.

Out of the Blue: Beginnings

The Gibbons catalog tells us that the stamps of Queensland were used from about 1885 onwards until the first issues were produced. These can be recognized by the killer cancels “N.G.” or “B.N.G.” in a heavy oval of bars, as well as other markings. These are quite scarce to rare. 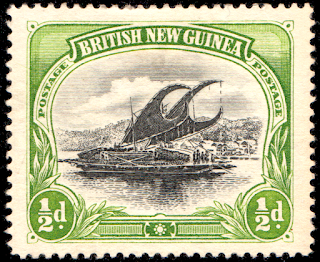 This is a beautiful and colorful engraved set (eight stamps), making  it is quite striking for the era.

Big Blue only provides two spots so you will be safe from harm with that. But curiosity killed the cat. and armed with a Gibbons catalog, we might (will?) descend into watermark variety and paper madness. The watermark comes horizontal  (shown above) or vertical. We can assume that because the full printing sheet was square, the printers didn’t really care how the sheet went into the press. The paper is listed by Gibbons as thin or thick, with the thin paper (with or without gum), feeling close to the thickness of a sheet of modern typing paper.

These were issued in sheets of 30 (5 stamps wide x 6 tall) with just crosses to align the two color prints. In the margins of positions 5 and 16, there are pinholes used to align the sheets for printing. So if you get a left or top margin copy with a marginal pinhole, your stamp is probably plated for you and it should not be counted as a flaw.

On this and later issues, you should be rather reluctant to pay any kind of premium for used with a socked-on-the nose Port Moresby cds, as most of those are favor-cancelled at best. Port Moresby is by far the most commonly seen cancel, with other towns scarce to rare. 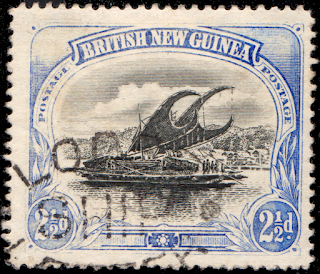 Maritime/paquebot cancels and Australian markings show up also, like the partial LOOSE SHIP LETTER cancel shown above, handed over on board ship or at the departure dock and so not carried inside the normal mailbags.

If you have the “B.N.G.” killer cancel mentioned earlier, it’s very likely genuinely used but may not be very attractive.

That is, except in one important case.

The scarce 2/6 value (CV $700) was forged by Sperati, along with the BNG cancel. The forgery is excellent, so anyone buying this stamp should have it certified. The Sperati forgery is worth some money by itself.

Collectors should note that the usual conditions for stamps from tropical regions apply to early 20th century issues, ranging from bright white paper with bright clear gum to having slightly toned paper and browned gum. The latter should not be heavily downgraded if at all. The 1/-  and 2/6 frame colors will often be oxidized to varying degrees. Centering is generally quite good in most cases. 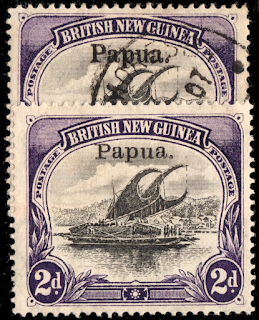 Control of the territory was given to Australia and the region was renamed Papua.

The large (1906-eight stamp issue- at top) and small (1907- eight stamp issue) overprints are shown above for comparison. Individual type letters can vary; this is fairly usual. See the raised "a" and period/stop on the small overprint above.

Since these overprints were done on existing stamps, there are the same paper and watermark varieties. 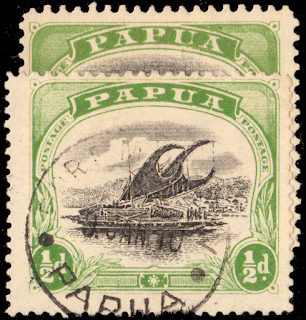 Large and small PAPUA: these can be quite confusing without several in hand and even then… There are slight variants in the tablet inscriptions besides(!) Here, the large is at top, the small at bottom. While the large generally has taller lettering than the other, I suggest using the width of the ending "A", which is clearly wider in the large PAPUA.

Crown and Double-lined A (Scott Wmk 13)
Can be upright or sideways
Here again we have two orientations of watermark (upright & sideways), now the standard Crown over A. This is also found reversed on occasion. There is perf 11, perf 12 ½ and a rare compound perf of the two. 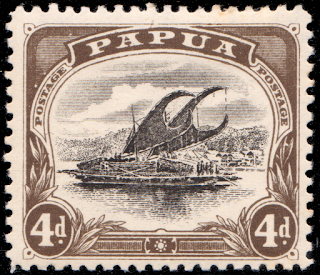 4d rift in clouds
Note slightly curved mostly horizontal white thick line above white puffy clouds
The issue is eminently plateable with possibly every value in a sheet being distinct from another and with 3 printing stones involved besides. There are characteristics found in both in the vignette and frame. The “Rift in clouds” (pos. 23 of every value) is the most prominent and so gets a mention in Scott. 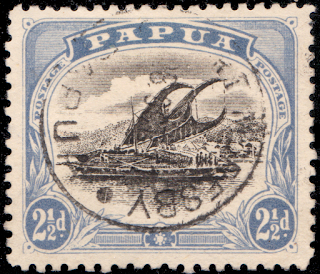 The “White leaves” at lower left variety adjacent to the 2d or 2 ½d. They are both popular and thus rate some premium but are really just distinct plate positions.

New transfers were made, with all values now with upright Crown over A watermark and perf 12 ½. The 1/2d and the 2/6 values are distinguishable by perf; the 1907 stamps are perf 11.

The rift in Clouds variety no longer existed but the white leaves variety still carried on. 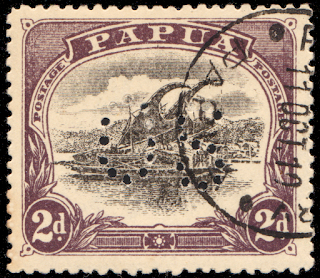 OS perfins exist beginning with the 2/6 large Papua overprint. These have been ignored by most collectors for the longest time since they have not gotten catalog recognition until fairly recently. Again, we have perf, paper and watermark varieties as on the basic stamps. 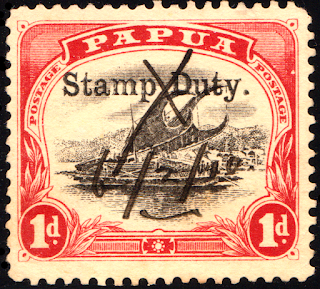 Out of the Blue again, revenue style

The Lithographed stamps were overprinted STAMP DUTY,  reported by the 1915 Forbin revenue catalog to be the ½, 1 and 6d small PAPUA values and the 2/6 large PAPUA.