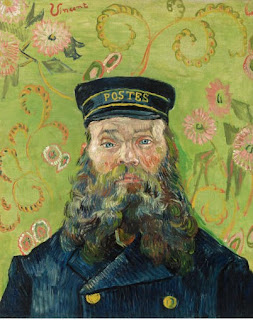 Dutch stamps abound in feeder albums, so filling the Netherlands spaces in Big Blue isn’t difficult except, perhaps, for a few of the postage dues. Nevertheless, I always check the Netherlands pages for interesting cancels when I get a new feeder album. Like its neighbors, Belgium and Luxembourg, the Netherlands excelled in SON (socked on nose) cancels during the pre-World War I era, and I’ve always liked them.

At first, I traded my ordinary cancels for any with clear dates and places of origin. Some of these linger on the first pages of the scans shown below, also on the supplement pages. Then, as duplicate SONs amassed, I limited my replacements to stamps cancelled in the towns I visited in pre-covid days. These also, in part, linger.

More recently I’ve been scanning the feeders for town-cancels where medieval, renaissance, and impressionist Dutch artists were born -- Hertogenbosch for Hieronymus Bosch (b. circa 1450), for instance, or Leiden for Rembrandt (b. 1606). These make for a somewhat more difficult search. I haven’t gotten very far but they, too, are plentiful. Dutch towns have long histories of supporting the arts. If, however, I end up finding too many of these, I’ll try birthtown cancels pinked on the artists’ birthdays. So far, I’ve found none of these. I might someday find and keep, say, a 17 June 1898 Leeuwarden cancel, M. C. Escher’s birth date and town. Who can guess what surprises feeder albums may hold?

For instance, take the Scott #84 (shown below). Cancelled in Bosch’s hometown, it’s supposed to be brown lilac, but gray lilac describes it better. An anomaly? Chemically faded? A rarity? I like it simply for its Hertogenbosch cancel. Peeking from behind it is a normal brown lilac #84, also rescued from a feeder album. 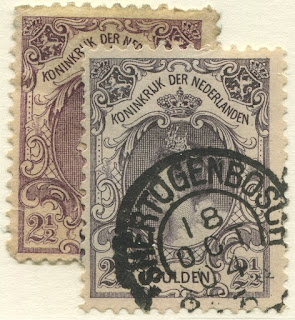 I’ve had more luck finding cancels for Hertogenbosch than for any other artist’s birthtown.  Here are three more:

Roughly contemporary with Bosch is the master engraver known only as IAM of Zwolle, the town of Zwolle presumably being where he was born and worked. While little is known about Bosch personally, even less can be said about IAM. His surviving works, only 24 in all, feature swarming crowds, have fine tonal nuances and, like Bosch’s paintings, tend toward the grotesque. 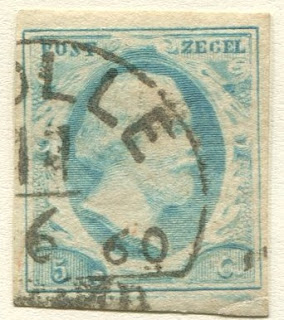 The Zwolle postmark is “type 75” according to O. M. Vellinga’s Postmarks of the Netherlands 1676-1915, a comprehensive on-line resource: https://jdlkremer.angelfire.com/VELLINGA.1676-1915.KNBF.pdf.

Leiden postmarks (Rembrandt’s place of birth) are also rather easy to come by. Rembrandt, of course, is not only the greatest Dutch artist, but the world’s greatest. I’m struck by the similarity of Queen Wilhelmina’s profile on the two stamps shown below and that of Rembrandt’s Bathsheba, except Bathsheba, having received King David’s letter demanding an illicit tryst, carries a mien of deep sadness. 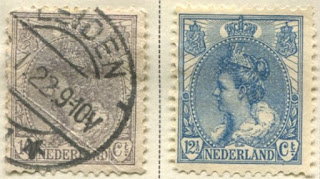 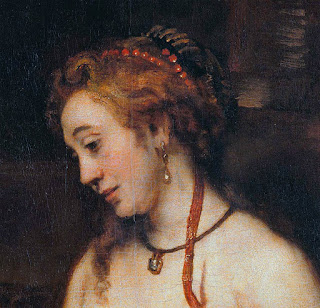 Coded postal obliterators (CPOs; puntstempels in Dutch) provide another way to identify artists’ hometowns although place names are not spelled out. A number, surrounded by 26 variously-shaped dots, designates the post office of origin (5 = Amsterdam, 91 = Rotterdam, and so forth). It’s unusual for all 26 dots to print and, even more rare, for all 26 to be found on a single stamp. And, of course, there’s no cancellation date. The Netherlands used CPOs from 1 April 1869 until 15 June 1893. An index of CPO numbers can be found at: https://poststempelverzamelaar.jouwweb.nl/puntstempel. 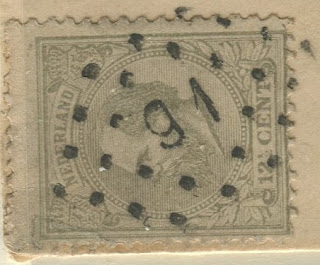 Rotterdam is the birthtown of Willem Pieterszoon Buytewech (b. 1581/2), a painter noted for his group portraitures of ribald parties, only few of which have survived.

Although not Dutch by birth, Claude Monet lived with his family in Zaandam, a town near Amsterdam, in 1871. He painted 25 views of his temporary home town. The river front scene, shown below, may include the post office (or maybe 😉 it’s just to the right and out of view). 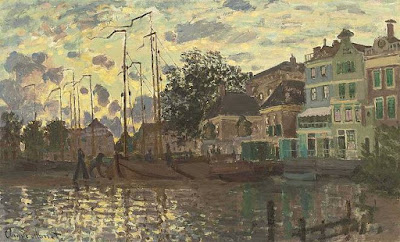 The Zaandam cover (below), likely a death notice, bears a clearer “type 75” cancel than the Zwolle example shown above. It was struck about a decade before Monet painted Zaandam.

Vincent Van Gogh used his drinking buddy, postman Joseph Roulin, as the model for many paintings. I particularly like the one hanging in Philadelphia’s Barnes Museum (shown at top). It would be the perfect illustration for this post on the Netherlands’ stamps except for the fact that Van Gogh was in Arles when he painted it, and Roulin was French. The “postes” on Roulin’s cap is the giveaway. Nevertheless, the Netherlands rightfully claims Van Gogh as its own, for he was born in the village of Zundert. Zundert cancels are few, so I borrowed this one and will need to give it back. I’m hoping for a Zundert cancel on Van Gogh’s birthdate, 30 March 1853, about a year after the first Dutch stamps were issued. I’m preparing for a long wait. 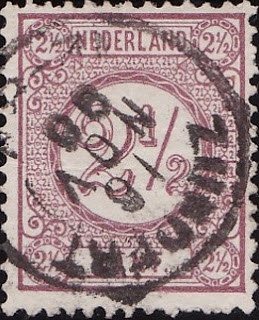 At first glance, early Dutch stamps seem rather drab, as the scans for Big Blue pages one through three (below) amply demonstrate. But, if you follow where the cancels lead, WOW!

Census: 307 in BB spaces, six tip-ins, 168 on supplement pages
Jim's Observations
For the Netherlands, Big Blue "69, on 10 pages ( Five for the semi-postals), has 140 spaces for regular, 7 air post, 35 postage due, and 125 semi-postal spaces. Of interest, BB only misses 8 semi-postal spaces.BB Total = 307BB Overall coverage = 61%.Of the expensive stamps in BB, there is one (1891 Scott 50 1g gray violet ($77+) ) that crosses the $35 threshold, and 21 between $10-$30+.  Of those, eleven are semi-postals.
The Netherlands classical issues, unlike some other European nations, are quite reasonable in price- considering they are indeed classics. And, although mono-color, i.e. "drab", as Bud says,  they are, to my eye, quite attractive indeed.And, the Netherlands also issued many quite attractive semi-postals. Have a look at them with the second blog post below.
Netherlands Blog Post & BB Checklist
Netherlands Semi-postals
Page 1 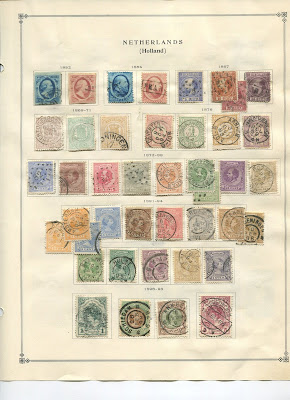 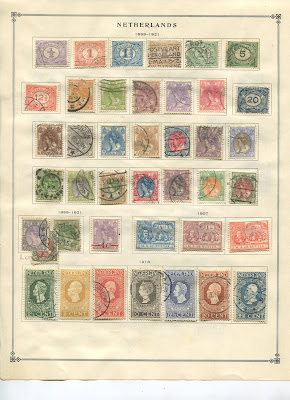 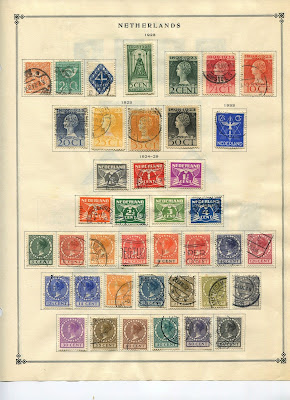 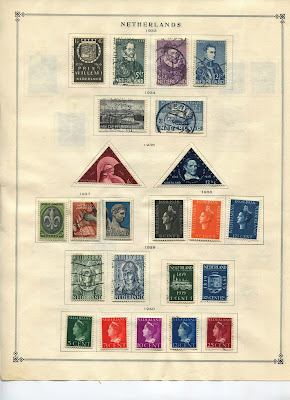 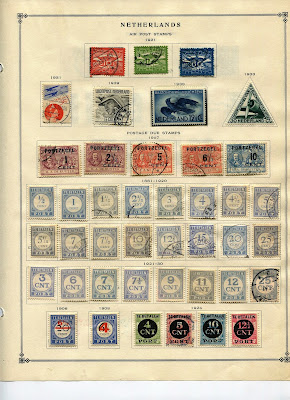 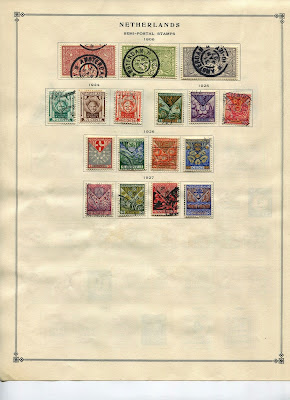 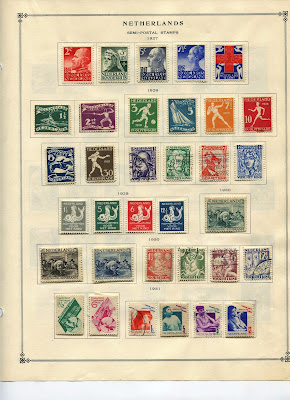 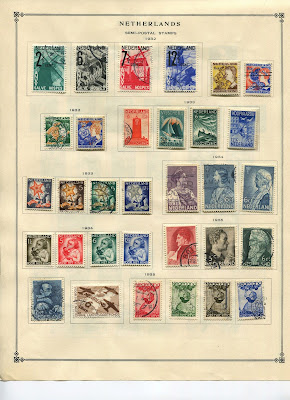 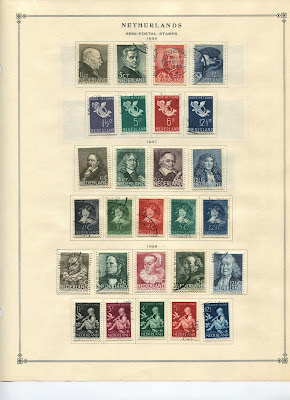 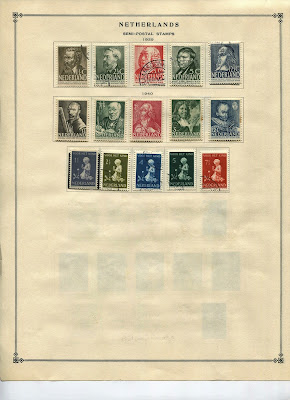 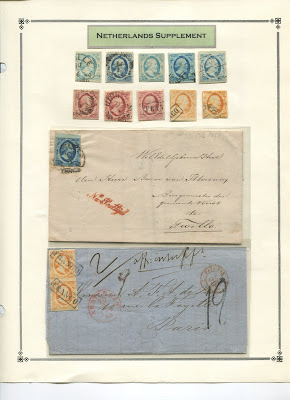 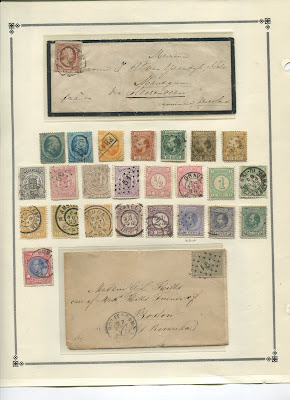 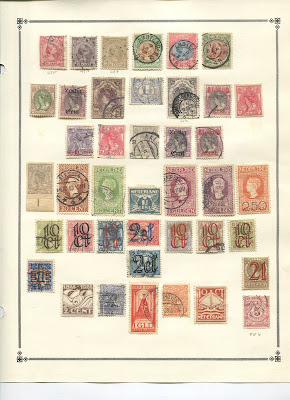 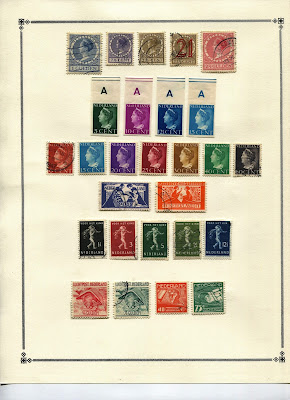 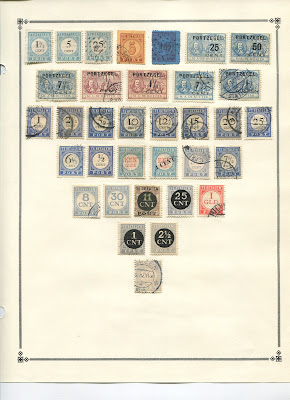 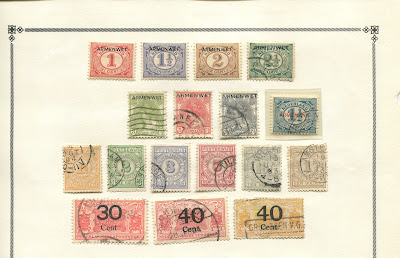 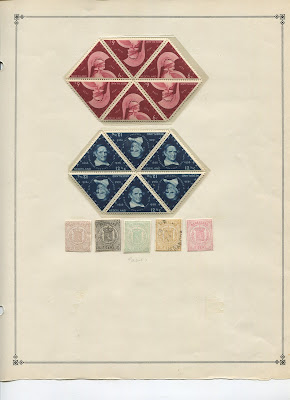