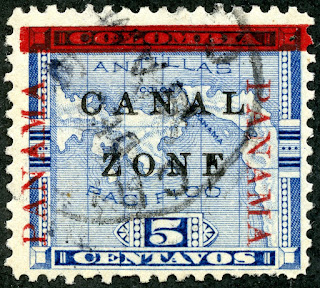 1904 Scott 12 5c blue "Map of Panama"
"Panama" (15 mm long) up left, down right
Overprint "Canal Zone" in black, "Panama" and Bar in red
Into the Deep Blue
June, 2019 Alert: The Big Blue Blog (active since 2011) has crossed over to two million total page views! Few stamp sites have reached that level - especially a non commercial collector driven blog as this one. I believe it is due to a healthy interest in WW collecting, and the 700+ quality blog posts. Now back to the topic at hand...Jim Jackson

The Canal Zone, ten miles wide and site of the Panama Canal (finished 1914), cuts through the isthmus of Panama from the Atlantic to Pacific Oceans, The land was leased from Panama and administered or co-administered by the U.S. from 1904-1999.

As the land was administered by the U.S., naturally it is found in the Scott catalogs attached after the U.S. listings. There is considerable interest in Canal Zone stamps in the U.S. and there is a Canal Zone Study Group.

The stamps are quite interesting - and a bit complicated. From 1904 to 1931, they consist of handstamped/overprinted/surcharged stamps of Colombia, U.S., and Panama stamps. Naturally, there are many variations (minor numbers) due to the overprints. Some overprint forgeries are known. The Canal Zone classic stamp era is truly a specialists playing ground.

Because of the rather complicated (and interesting) issues, I will divide the blog posts for the Canal Zone into two parts: This one will cover 1904-1920, and the next one will cover 1921-1939. 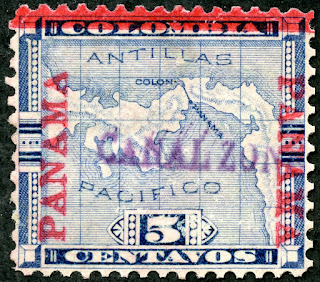 1904 Scott 2 5c blue "Map of Panama"
"Panama" (15 mm) up left, down right
"Panama" and Bar in red
Violet - Violet Blue Handstamp "Canal Zone" on Panama Scott 78
The initial issue for the Canal Zone of June 24, 1904, consisted of three stamps - a 2c rose, a 5c blue, and a 10c yellow. They were handstamped in violet-violet blue "Canal Zone".  The handstamps were applied to stamps from Panama, which are overprinted  in red "Panama" up left, down right, and also having a red bar through "Colombia", as these stamps were originally from Colombia. ! Complicated.

The CV is rather high (If genuine, the 5c blue unused above is CV $300), and the overprint can be found inverted or double for a much higher CV.

Scott has a warning: "Forgeries of the "Canal Zone" overprint and cancellations are numerous".

Is my stamp genuine? I have no idea, but the underlying Panama stamp unused (Scott 78) is only CV 30 cents, so probably doubtful. I would need to send it away for expertization. 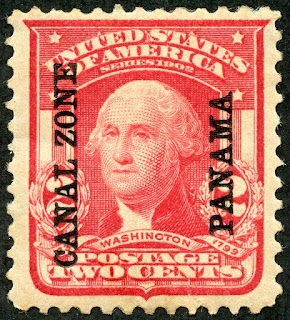 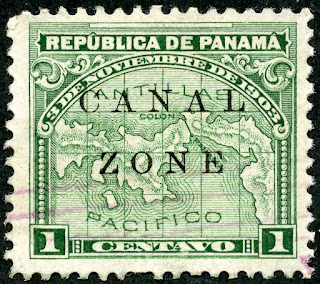 1904 Scott 9 1c green "Map of Panama'
Black Overprint on Stamps of Panama
Between 1904-06, two stamps were released ( a 1c green and a 2c rose) that shows a black overprint on stamps of Panama. The overprint can be found as "Regular Type" and "Antique Type" - see Scott for specifics. CV is a modest $2+. 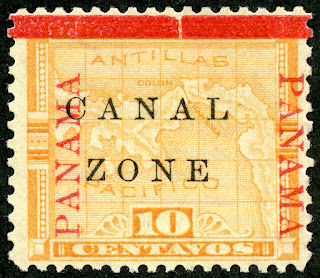 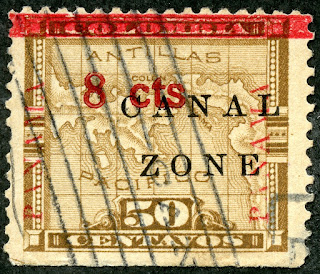 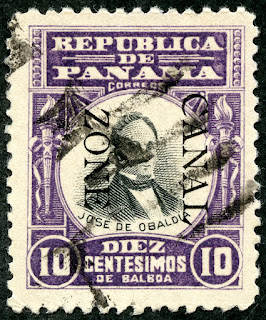 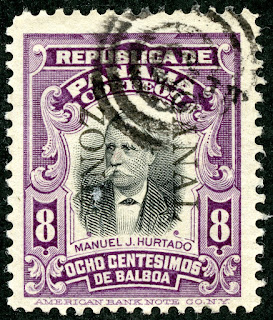 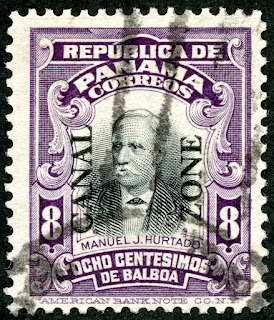 1909 Scott 34 8c violet & black "Hurtado"
Black Overprint reading up, Overprint Type I
In addition, between 1909-10, five stamps were issued (using stamps from Panama) with the script reading up. CV is $1+-$20. I should mention that this overprint is Type I. There are actually five types of overprints (Type I - V) identified by Scott in the catalog issued between 1909-1921.

Don't worry. I will compare/contrast the overprints in due course. 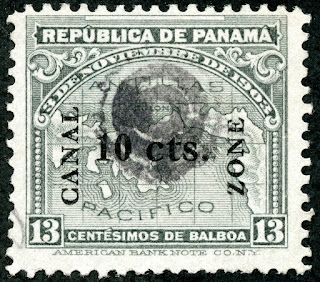 1911 Scott 36 10c on 13 gray
Black Surcharge
In 1911, this 13c gray was released with a 10 cts surcharge, and overprinted "Canal Zone" as shown on this stamp of Panama. Actually, I don't believe this stamp was ever used by Panama. Of note, the same stamp with overprint, but without the 10 cts surcharge, was issued in 1914 (See "Out of the Blue" header for example). 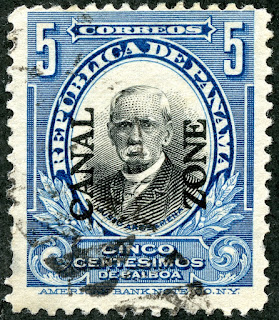 1912 Scott 40 5c deep blue & black "Arosemena"
Black Overprint reading up, Overprint Type II
Between 1912-16, a four stamp issue (1c, 2c, 5c, 10c) with the black overprint reading up was released. The four stamps are identical to the same four denomination stamps found for the 1909 issue (five stamps-reading up) save that the OP here is Type II, rather than Type I.

Well, what is the difference with Type I and Type II? 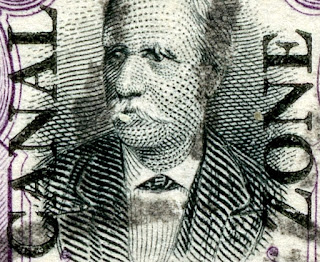 Type I
"C" with serifs both top and bottom
"L", "Z", and "E" with slanting serifs
These are the characteristics of Type I.

Type III
Similar to Type I, but the letters appear thinner, particularly the lower bar of  "L", "Z", and "E". Impressions are often light, rough, and irregular, and not centered. 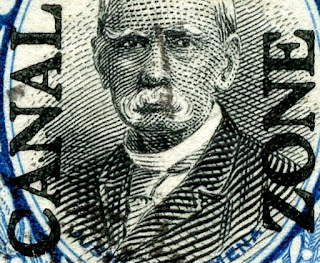 Type II
"C" with serif at top only
"L" and "E" with vertical serifs
"O" tilts to left
And here are the characteristics for Type II. Be aware that there are a total of five types, so one will need to learn how to identify all the types. 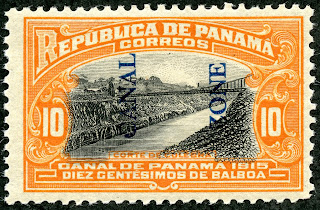 1915 Scott 45 10c orange & black "Culebra Cut"
Blue Overprint, Type II
In 1914, the Panama canal opened up for business. Panama released a bi-colored eight stamp pictorial set for the Panama-Pacific Exposition in 1915. Four of these stamps (1c, 2c, 5c, 10c) were used by the Canal Zone and overprinted in blue, Type II. Two of the stamps (5c, 10c) showed scenes of the canal. 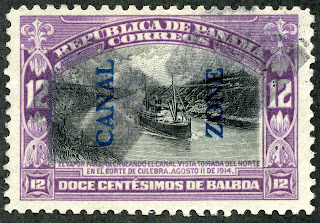 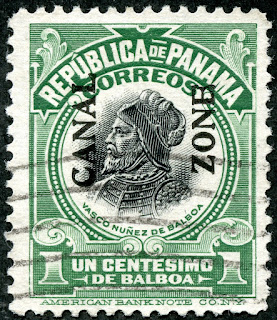 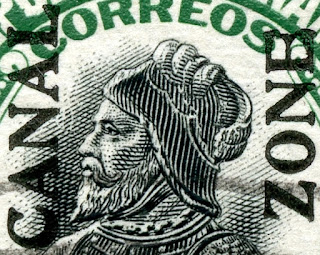 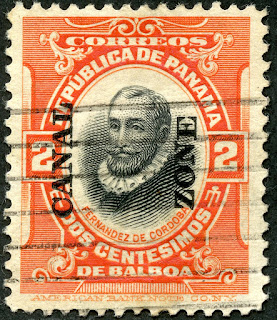 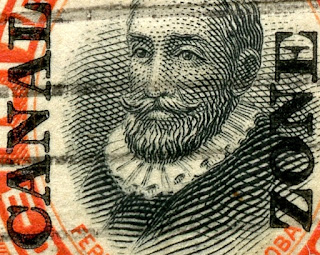 Type V
Smaller block type 1 3/4 mm high
"A" with flat top
As one should now be well aware, one needs to pay close attention to overprint types for Canal Zone issues, as often the same underlying denomination stamps of Panama were used. In other words, one can only identify for sure in many cases a particular Canal Zone stamp by identifying the type of overprint. 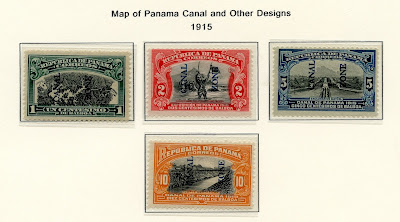 Canal Zone 1915 Issue
Deep Blue (Steiner) has 4 1/2 pages for the regular issues of 1904-1920 Canal Zone. All of the Scott major numbers have a space. As I mentioned earlier, there are many minor numbers (usually with high CV) because of changes in the overprint (inverted, doubled etc). Obviously, if one was specializing or obtaining many of these specimens, the Steiner pages would no longer be adequate. 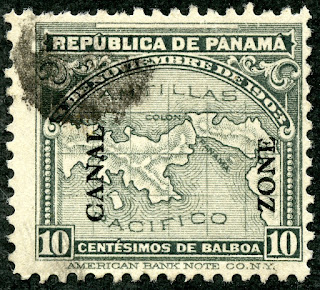 1915 Scott 37 10 gray
Black Surcharge
Out of the Blue
Well, that was interesting, especially with all the types!

We will continue with the Canal Zone 1921-1939 regular issues, as well as air mail and postage due categories with the next blog post.