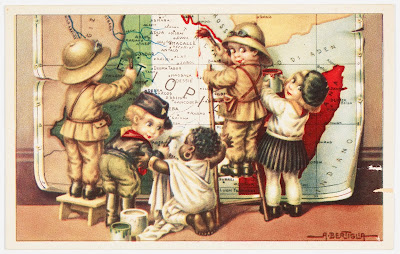 Beyond alphabetical reasons, there is a certain apropos, if not irony, that BB’s Italian East Africa (IEA) pages following next to its Italian Colonies pages. IEA represents a further and final stage Mussolini’s twisted vision of how Italy was to become great again. IEA lasted only a few years, then the Allies put an end to it.

The 1935-37 Second Italo-Abyssinian War, in which Mussolini’s forces dumped some 300-500 million tons of mustard gas on Ethiopian troops and civilians, resulted in Italian occupation of Ethiopia. The occasion demanded new propaganda stamps and posters, as shown in the scans for this posting. Note the fascist eagle subduing the Ethiopian Lion of Judah, repeated four times in the 1938 series; note also the above card with the horrors of Il Duce’s ambitions camouflaged as cute chubby child-soldiers in order to minimize malicious atrocities. Other of Aurelio Bertiglia’s Ethiopia postcards are even more objectionable.

IEA stamps were also used in British Somalia, which the Italians held briefly. A few occupation stamps, issued in 1936 for use in Ethiopia alone, appear at the end of BB’s (1969) Ethiopia section.

Jim's Observations
Italian East Africa was formed in 1936 by combining the Ethiopian Empire with Italian Eritrea and Italian Somaliland. Ethiopia was added to the dominion after the Fascist Mussolini Italian Forces defeated Haile Selassie and the Ethiopians in the Second Italo-Abyssinian War. Italy's Fascist regime wished to colonize the territory with Italian farmer citizens. But few went to Ethiopia, most went to Eritrea.


Attractive stamps, although the Fascist driven aggressiveness is neither subtle or pretty. 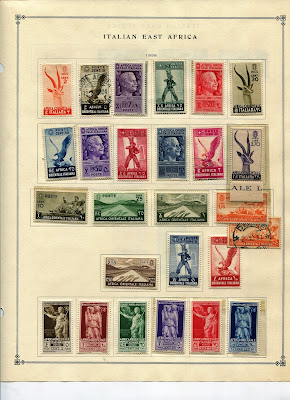 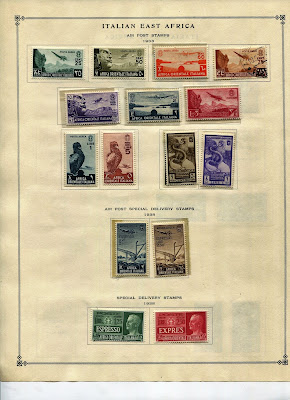