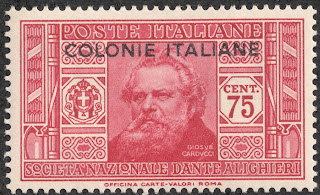 1932 Scott 7 75c carmine rose "Giosuè Carducci"
"Italian Poet, Nobel Prize in Literature, 1906"
Quick History
The generic "Italian Colonies" stamps, for general use in all colonies, were produced from 1932-1934. They supposedly could be used in Cyrenaica and Tripolitania (Became part of Italian Libya in 1934), Eritrea, and Somalia.

Italian Colonies (Libya, Eritrea, and Somalia) are in blue
Italian Libya, formed in 1934, consisted of, in part, the former colonies of Cyrenaica and Tripolitania
Italy was late off the mark with colonies in Africa, only initiating colonialism in 1890 with the colonization of Eritrea. And it was done more for enhancing the prestige of Italy, and converting native populations to Christianity, rather than for primarily economic benefits.

Into the Deep Blue
The 2011 Scott Classic specialized catalogue, for "Italian Colonies", has, for 1932-34, 50 regular, 35 air post, and 2 air post special delivery major stamp descriptions, for a total of 87 major descriptions. The CV for these stamps are moderately expensive, and unused is less expensive then used. For a CV of $1+-$9+, 46 stamps are found, or  53%. 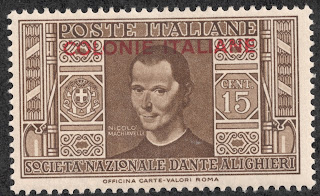 1932 Scott 2 15c olive brown "Niccolò Machiavelli"
The Italian Dante Alighieri Society issue of 1932 was printed in different colors, and overprinted as shown for the Italian Colonies issue. This 12 stamp issue, quite attractive, has a CV of $1+-$2 for each stamp.

Niccolò Machiavelli, of course, a 16th century philosopher, humanist and writer, is famous for "The Prince", where glory and survival can justify the use of immoral means to achieve these ends. Hence "Machiavellian" as a pejorative term. 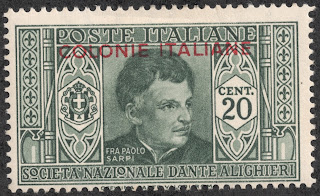 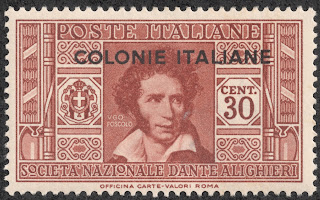 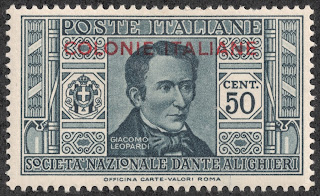 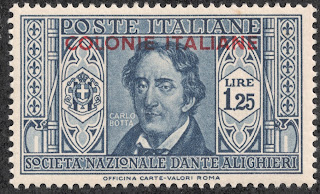 One would agree, the Italians, like the French, can put together a very nicely designed stamp issue. 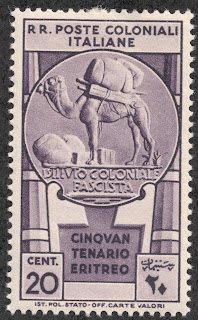 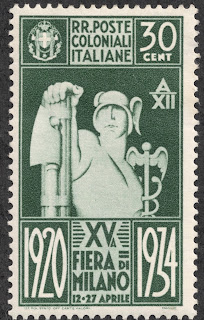 1934 Scott 43 30c slate green "Mercury and Fasces"
"Fasces" are a bundle of wooden sticks with an axe blade emerging from the center.  This 4 stamp set was for the 15th annual Trade Fair in Milan. CV is $1+. 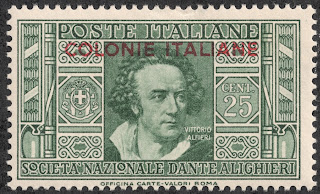 Has anyone noticed that Big Blue seems to have rather generous coverage of the moderately expensive colonies of Italy? Here 62% coverage for "Italian Colonies".  Cyrenaica, for example, has 68% coverage.
Likewise, the CV for Cyrenaica was $1+-$10 for many stamps. Many Big Blue collectors (myself included) do not have a lot of the stamps of the colonies of Italy.

And there are expensive ones. ;-) 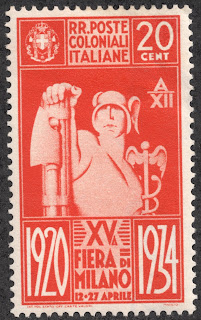 1934 Scott 42 20c red orange "Mercury and Fasces"
Out of the Blue
Expensive, and ironically a generous selection provided by Big Blue. But I'm starting to warm up to the Italian designs.  ;-)