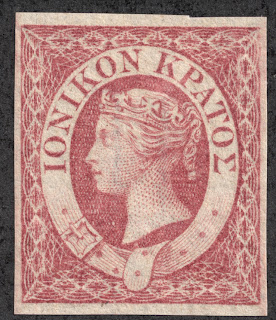 1859 Scott 3 (2p) lake "Queen Victoria"
Issues of the British Protectorate
Quick History
The Ionian Islands, off the coast of mainland Greece, became a British protectorate after defeat of the French fleet in 1815. The "United States of the Ionian Islands" was formed under a new constitution. Initially satisfied under British rule, with the independence of Greece in 1830, many islanders preferred union with Greece.

The seven islands (Corfu, Paxos, Lefkas, Cephalonia, Ithaca, and Zante in the Ionian Sea, with Kythera in the Mediterranean Sea south of Greece), had an area of 752 sq. miles, and a population of 250,000. 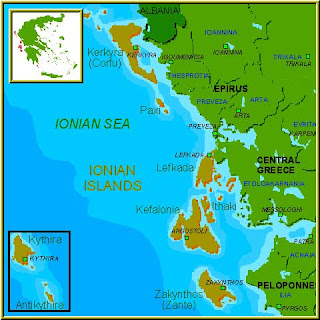 Map of Ionian islands
But the British were reluctant as the islands provided good naval bases.  And the Greek King Otto, German born, was considered to not have much British sympathy.

In 1859, the iconic stamp design of "Queen Victoria", looking somewhat like a Greek goddess, was produced in orange, blue and lake. This would prove to be the only British protectorate issue for the Ionian islands.

Then, in 1862, Otto was deposed, and George I, friendly to Great Britain, was put on the throne.
Britain then transfered the islands to Greece, except for the port of Corfu. Greek stamps were subsequently used. 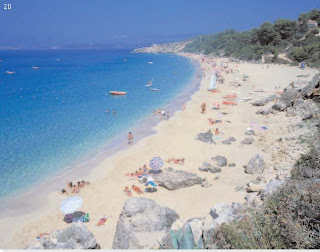 1859 Scott 3 (2p) lake "Queen Victoria"
The denominations are determined by color.
Absolutely classic and lovely, no? There are many forged cancellations for these stamps due to the much higher CV for used. 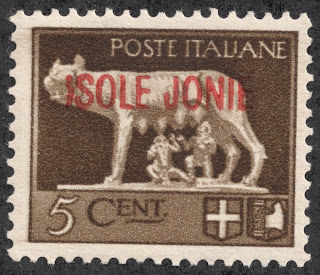 1941 Scott N18 5c olive brown with red overprint
Italian occupation of the Ionian islands.
Some 52 stamps were issued with overprints during the occupation. Although this blog generally stops at 1940 for non British Commonwealth countries, I am adding this grouping to my collection.  In fact, I'm considering expanding to about 1950 for all countries for my collection. Not quite there yet though. ;-)

BTW, For a great discussion on the Italian occupation of the Ionian islands, see..
http://www.dcstamps.com/?p=2674 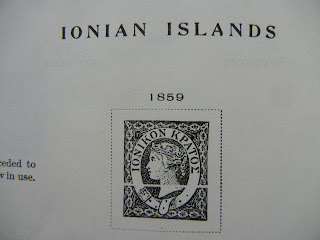 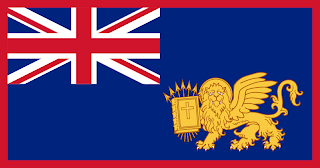 "United States of the Ionian Islands" Flag
Out of the Blue
The "Queen Victoria" design probably ranks in the top 10 all time.

Note: Map, Flag image, and pic appear to be in the public domain.

Happy New Year to every reader!