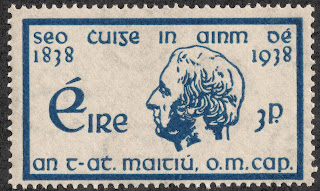 1938 Scott 102 3p ultramarine "Father Theobald Matthew"
Temperance Crusade, Centenary
Quick History
The Irish Free State, originally an autonomous state within the British Commonwealth, was created by government act in 1922. The name was changed to Eire in 1937. The duties of the British Monarch were removed in 1949, and Ireland was declared a republic.  Commonwealth membership was terminated.

Ireland is also an island, divided between the (now called) Republic of Ireland, and Northern Ireland, part of the United Kingdom.

Ireland
The bland introduction belies the tumultuous history between Ireland and Great Britain. 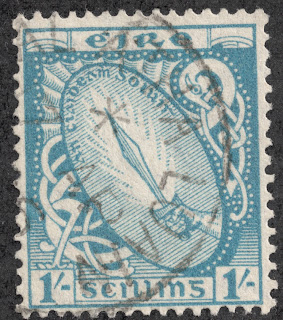 They are differentiated by the inscription, the color of the ink, or the size of the overprint. Let's take a look... 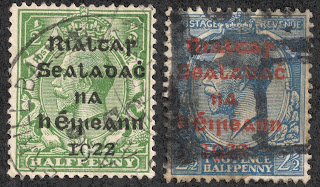 1922 Scott 1 1/2p green "Provisional Government of Ireland"
1922 Scott 9 2 1/2p ultramarine, carmine overprint
This issue, beginning on February 17th,  some 13 major numbers, was overprinted by Dollard, Ltd. The overprints can be found in black or gray black, or red or carmine. The CV for 4 stamps is $1+-$3+. The above illustration shows a black and a carmine overprint.

The stamps are easy to identify, as there is no period after the "1922". 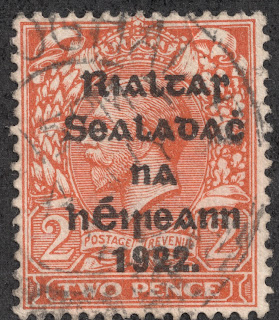 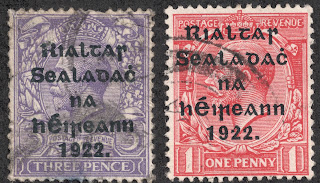 1922 (July-November) Scott 28 3p violet, blue-black OP
1922 (December) Scott 40 1p scarlet, has wider OP
The two issues above are distinguished from the preceding issue, and from each other by several signs. 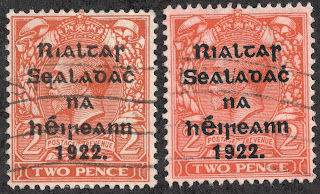 1922 (July-December) Scott 26b 2p orange, Die I
1922 (July-December) Scott 26 2p orange, Die II
The 2p orange is found with two Die types. (Enlarge for careful examination.) Die I has four horizontal lines above the King's head in the oval vignette. Die II has three lines. Die I shows heavy colored lines above and below the bottom tablet. Die II has thinner lines. 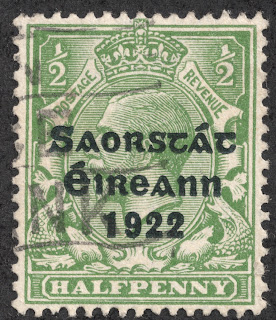 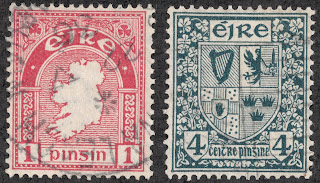 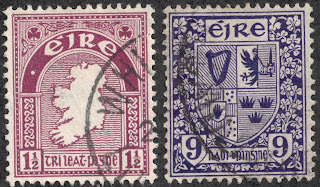 Well, what about the watermarks? 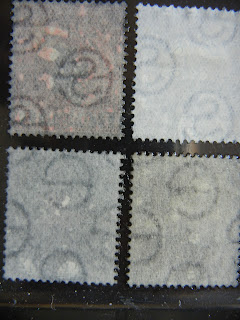 Top row: Wmk 44- SE in Monogram
Bottom row: Wmk 262- Multiple "e"
The watermarks are similar in shape, so don't get fooled by a cursory glance. ;-) Otherwise, quite easy to tell. 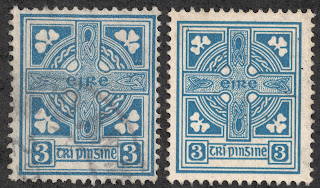 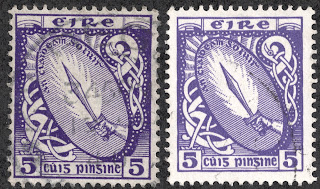 Deep Blue
Deep Blue (Steiner) has 13 pages for the coverage of Ireland, all following the Scott listing. 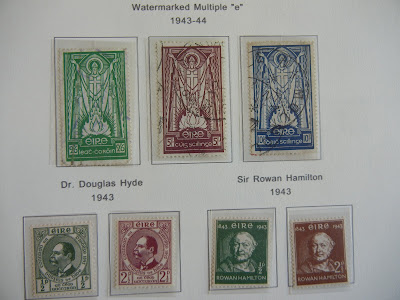 Classical Deep Blue has coverage for 1941-1950
Of interest, the 2011 Scott Classic Specialized catalogue only covers the issues through ~ 1942. But Ireland was technically a member of the British Commonwealth until 1949. Deep Blue (Steiner) covers up to ~1950 in the classical pages. 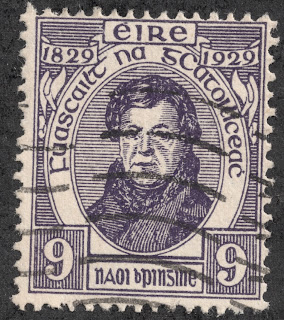 Big Blue condenses the 64 possible major stamp numbers for the OP 1922-23 issues into 7 spaces. And BB does not provide any space for the "Irish Free State" overprinted 1922-23 Scott 44-55 stamps. I unravel the various choices in the "comment" section following the checklist.

There are only three stamps that cross the $10 threshold.

B) *1922 issues- The illustration is for the Dollard Ltd printed February 17, 1922 issue with no period after "1922". But some descriptive spaces (1 1/2p red brown, 2p orange) are for other 1922 issues with the period after "1922". So all "Provisional Government of Ireland" OP stamps are admitted to these spaces. What is not admitted are the "Irish Free State" OP issue of 1922-23. For the 2p orange, both Die I and Die II can be put in. Also coil stamps (Scott 20-22) are admitted. Finally, the 2 1/2p ultramarine and the 4p slate green descriptions admits either a black or red/carmine colored overprint. This is what happens when BB condenses 28 choices into 7 spaces. ;-) 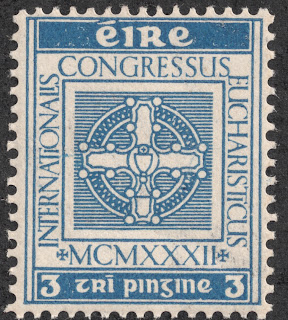 1932 Scott 86 3p bright blue "Cross of Congress and Chalice"
International Eucharistic Congress
Out of the Blue
Because of the large Irish immigration into the United States, the stamps of Ireland are quite popular here. Perhaps I need to brush up on Irish Gaelic to understand the inscriptions. ;-)

Comments are appreciated!
Posted by Jim at 1:05 PM