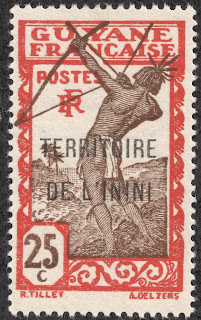 1932-40 Scott 9 25c dark red & dark brown "Carib Archer"
1929-40 French Guiana overprinted for Inini
Quick History
Between 1930-1946, the interior of French Guiana, a territory known as "Inini", was administered separately from French Guiana in the hope of developing the interior. Prisoners from Annam in Indochina, who had revolted against French rule there, where brought in to construct a railroad. 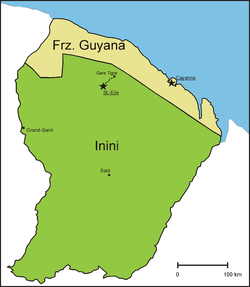 The interior jungle called "Inini"
A failed experiment
Stamps of French Guiana were overprinted from 1932-1940. The Vichy government printed stamps in 1941 and 1944 without the "RF" inscription, but they were never placed on sale in Inini.

Was the attempt to build a railroad and colonize the interior a success? No. But the ruins of three prisons are still visible. 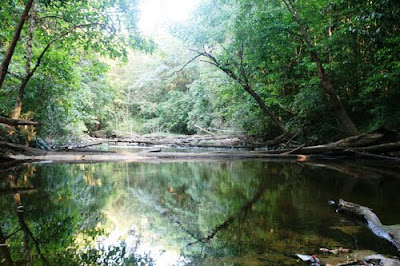 Inini
Into the Deep Blue
Despite the failed experiment, and lack of demand (to say the least) by the Ininians for post office services, the stamps of Inini are widely found in WW albums. The packet trade must have been busy. ;-)

I originally came across the Inini stamps while doing the French Guiana post.
For initial impressions, refer to:
http://bigblue1840-1940.blogspot.com/2012/01/french-guiana.html 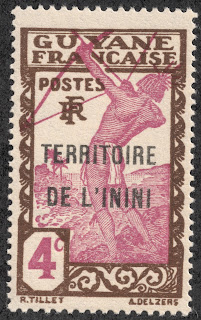 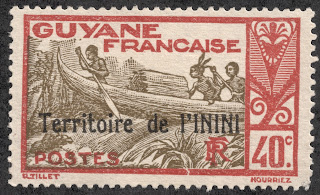 1932-40 Scott 13 40c orange brown & olive gray, overprinted
"Shooting Rapids, Maroni River"
The middle values (17 stamps) are represented by the design as shown. One must admit that, although the issue volume seems excessive, the designs by the French are interesting. 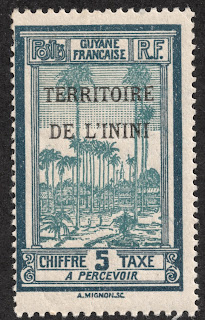 Deep Blue
Deep Blue (Steiner) has 6 pages for the issues of Inini, and follows the Scott catalogue nicely. 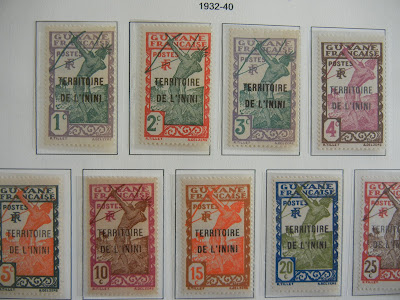 The overprinted "Careb Archer" stamps for Inini in Deep Blue
Although the stamp design is nice, I can't help but wonder: Whatever happened to those 500 prisoners from Annam?............ 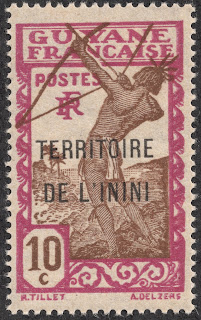 1932-40 Scott 6 10c magenta & brown
Big Blue
Big Blue '69, on two pages, has 48 spaces for the stamps of Inini, including 9 spaces for postage dues. Coverage is an astounding 83%. Contrasts with the rather parsimonious offerings for some other countries. ;-) 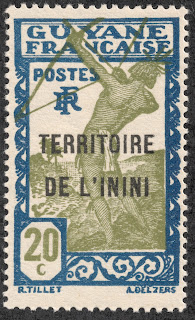 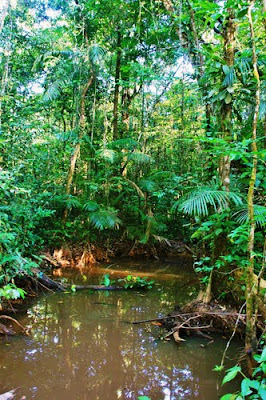 The interior, "Inini", of French Guiana