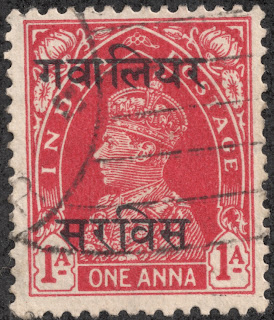 Gwalior 1938 Scott O47 1a carmine "George VI"
"Gwalior" and "Service" in Devanãgari (Hindi) Script
Quick History
As part of the function of the "British India" government, naturally there was not a small amount of correspondence from government agencies. These "Official"  overprinted stamps from the "British India" regular issues will be covered in this post.

What about the non "British India" portion of India, namely the autonomous or semi-autonomous Native or Princely States?

Six states had a postal convention agreement with "British India" to use the regular issues of British India overprinted for use in their states. These "Convention" states are Chamba, Faridkot, Gwalior, Jind, Nabha, and Patiala. We will review the issues for the Convention States in this post.

Then there were the "Feudatory" States, in which the "British India" government had little internal control. A number of them (some 35 are listed in Scott) had their own stamp issues, valid only within the State. These fascinating issues, to say the least, will be covered in the next post.

Let's look at again at a map of the Native States....

India Native States 1934-47
Too confusing to make much sense here, but we will eventually review specifically many of the states that issued stamps. 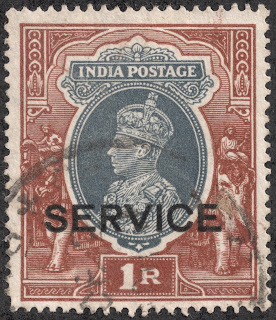 For the Convention States, we will delay presenting the Scott statistics until later. 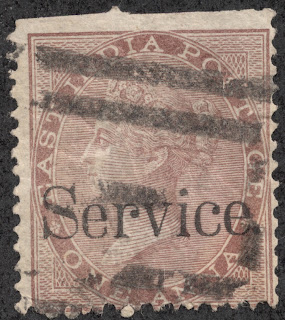 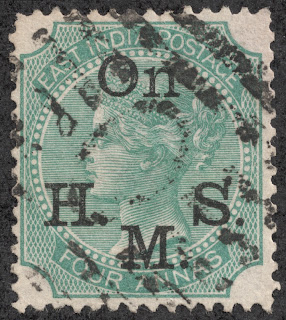 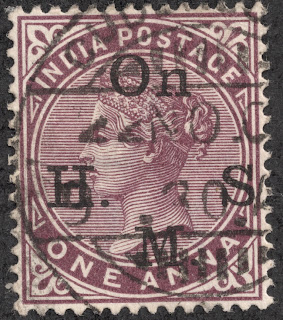 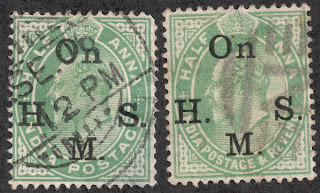 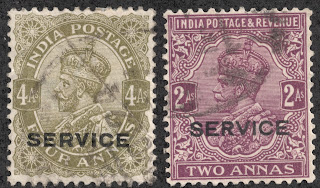 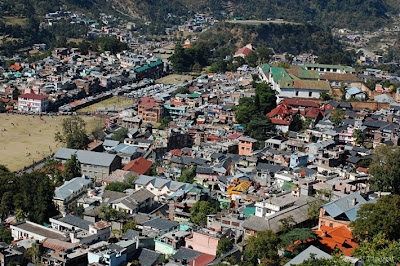 Town of Chamba
Located in the Himalayas in a valley along the Ravi river at 3400 feet, Chamba came under British suzerainty in 1846. Relations were cordial with the British, and  in 1863, the first Post Office was established.  The princely State of Chamba merged with India in April, 1948. 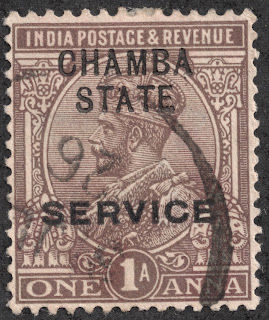 Chamba 1925 Scott O30 1a dark brown
The fascination for me with the Convention States is more with the states themselves, less so with the stamps: certainly compared to the Feudatory States. Nevertheless, they definitely have a higher CV than the corresponding "British India" stamps, so they are clearly collected enthusiastically.

Above is an example from 1925 of an official Chamba State stamp. 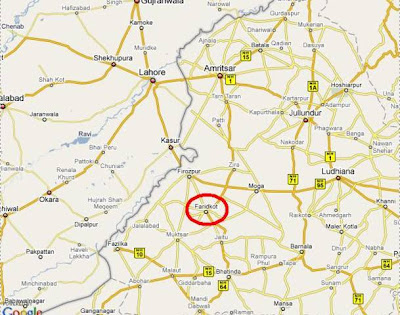 Small city of Faridkot in east Punjab
Faridkot, along with the other Convention States of Jhind, Nabla, and Patiala, were all part of the cis-Sutlej states located in east Punjab. The four Punjabi states were closely allied, and all supported the British during the 1857 Rebellion.

Faridkot was a Feudatory stamp issuing state from 1879-1887, then a Convention State until 1901. After 1901, it no longer issued overprinted stamps, and regular British India stamps are found. 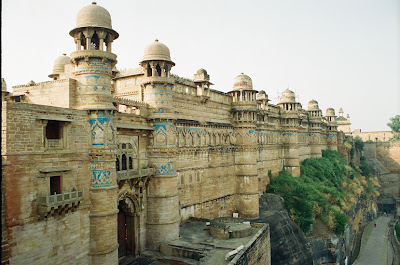 Gwalior Fort, built in the 8th century
Hot and humid during the long summer, Gwalior, located in central India, was the largest of the Convention States. 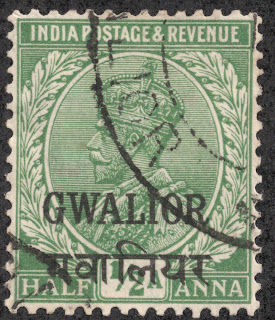 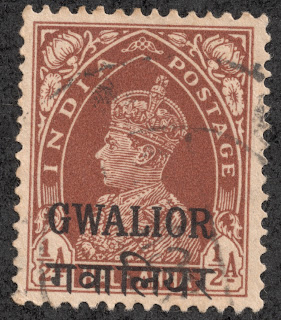 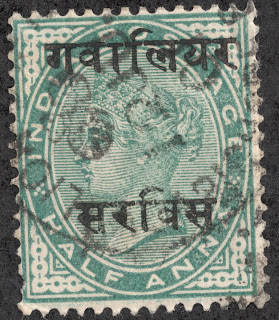 1895 Scott O1 1/2a green, overprinted
The Gwalior Official stamps have Hindi script only.
Noted above is an official stamp for Gwalior, actually the first one. If one doesn't know Hindi script, one might have difficulty identifying the stamp. ;-)

Hindi alphabet
If one does the translation, the stamp is overprinted with "Gwalior", and "Service". ;-) 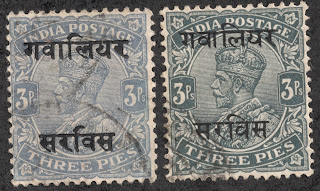 But there are some color differences between the like denomination stamps. Note the "gray" for the 1913 stamp, and "slate" for the 1927 stamp: quite characteristic, and usually noticeable. 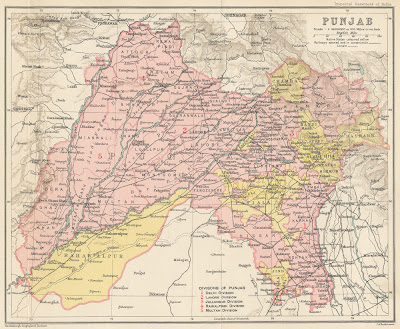 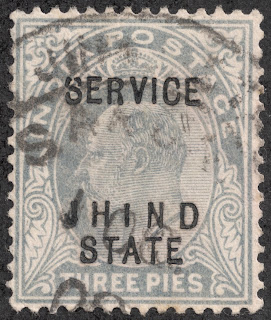 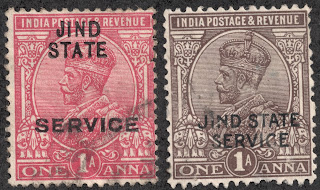 1914-27 Scott O27 1a carmine rose
1927-32 Scott O39 1a dark brown
The two watermarked issues for George V have other differences. As one can clearly observe, here there are different colors and different overprints.

Nabha was a small state scattered into enclaves in Patiala and Jind. Nabha had 15 post offices. 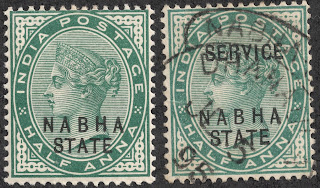 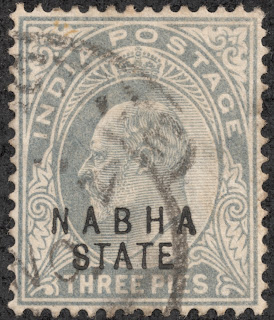 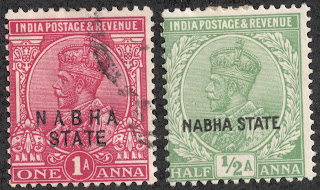 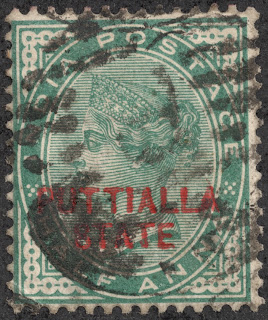 1885 Scott 7 1/2a green, red overprint
Note "Puttialla" variation overprint
Some of the overprints for the convention states are in red; although not too many.  The 1885 issue (6 stamps) can be found in either red or black, but not both. The CV ranges from <$1-$6 for 4 stamps. 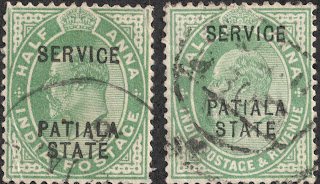 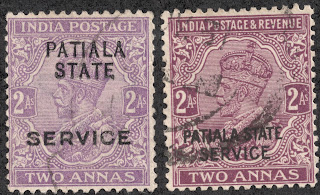 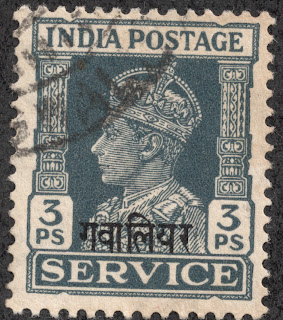 For the "Convention States", the '41/'47 and '69 ( and presumably the '97) only have a blank page with the six convention states listed along the top. There would be about 7 spaces apiece for each convention state if each had their own vertical column. For Chamba, Faridkot, Gwalior, Jhind, Nahba, and Patiala, coverage would be 4%, 35%, 4%, 3%, 4%, 4% respectively.

If one would rather take the democratic view that any 42 Convention State stamps are acceptable to fill the page, then 42/958 = 4.4% overall coverage by BB.

Clearly, for the BB collector looking for additional inexpensive stamps, the Convention States would offer many: 365 by my count ( CV <$1-$1+).

• This section of BB is inexpensive to fill with only one blank space choice having a CV of $10+.

• Forced by some blank space choices in the "British India" Official section, one must pay attention to some of the George V issues watermarks. ;-)

E) O81 or O83*: Different designs, but both work for the intent of the space. 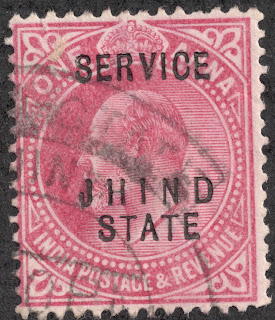 Jind 1907 Scott O24 1a carmine rose
Out of the Blue
I enjoyed this post more than I thought I would. The "British India" Officials, and the Convention States all have overprinted regular issue "British India" stamps. That affords an opportunity to show off these nicely designed stamps once again. And I learned something about the Convention States.

For the BB collector, realize the 42 stamp maximum (for a blank page) for the Convention States is the tip of an iceberg. There are actually 958 major number stamps in the catalogue, 365 of them with a CV of <$1-$1+.

Note: Maps, photos, Hindu alphabet pic, appear to be in the public domain.