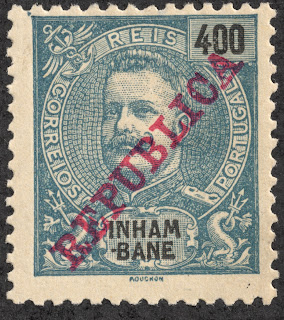 1911 Scott 44 400r dull blue/straw "King Carlos"
Stamps of 1903 overprinted in carmine or green
Quick History
When  Vasco de Gama in 1498 discovered the Bay of Inhambane while rounding East Africa, he was so taken with the land, that he called it "Terra de Boa Gente", or "Land of the Good People".

This southern part of Mozambique, where the Portuguese established a trading post in 1534, is also the land of cashews, coconuts, and tangerines. Beaches mixed with mangrove swamps, fishing, and the last vestige of dugong in Mozambique complete the tropical setting. 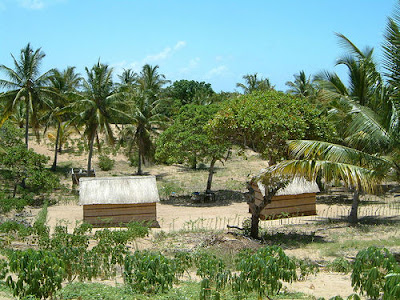 Village in Inhambane Province
The first issue for Inhambane in 1895 were overprinted using 1886 and 1894 Mozambique stamps, and celebrated the 700th anniversary of the birth of St. Anthony of Padua. They are rather expensive by Portuguese colony standards (CV $25-$400 for 14 stamp production), and I don't have any. ;-)

The colony continued to issue stamps until 1917, when the stamps of Mozambique were used.
(Inhambane was actually a district of the Mozambique Province of Portuguese East Africa.) 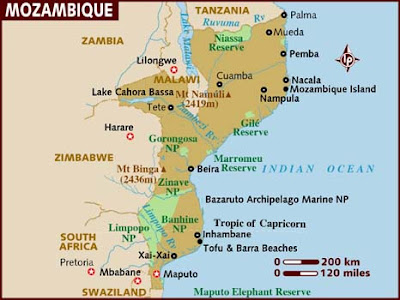 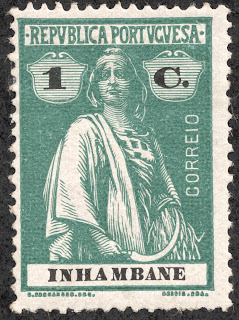 Except for the first 1895 14 stamp issue, the CV for Inhambane is modest. 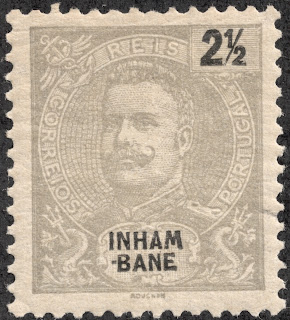 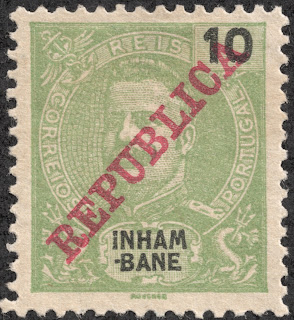 1911 Scott 34 10r light green
Overprinted "Republica" in carmine
Due to political turmoil in Portugal, in 1911, the set was overprinted as shown. The overprint was in carmine, except for the 25c carmine, which was in green. The 15 stamp set has a CV of <$1-$1+ for all the stamps in the set. 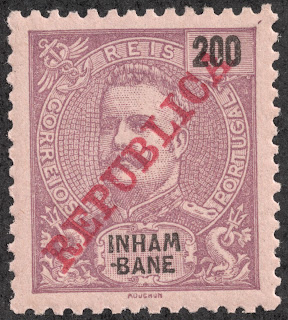 1911 Scott 43 200r red violet/pink
Of interest, the higher values of the set are on colored paper. Here "pink", while "straw" paper color is found for the 400r stamp illustrated at the beginning of the post.

In 1913, some 24 stamps from Macao, Portuguese Africa, and Timor of the "Vasco da Gama" common design issues were overprinted for use in Inhambane. CV ranges from $1-$2+ for these stamps. 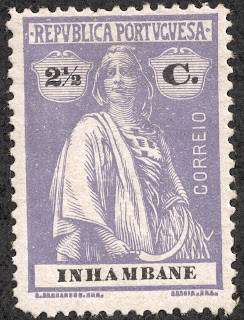 In 1917, the overprinted "Republica" King Carlos stamps were overprinted locally, resulting in major Scott numbers for this 13 stamp issue. I don't have any, but the CV is an inexpensive $2+ for 8 stamps. 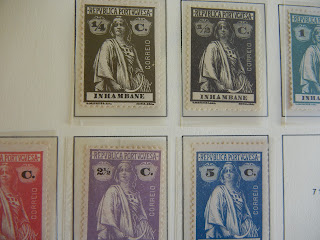 The 1914 "Ceres" issue in Deep Blue
Deep Blue (Steiner) has 8 pages for the issues of Inhambane, and follows the Scott catalogue exactly. One can contrast the generous and spacious Deep Blue with the full and compact one page in Big Blue. Each have their advantages. 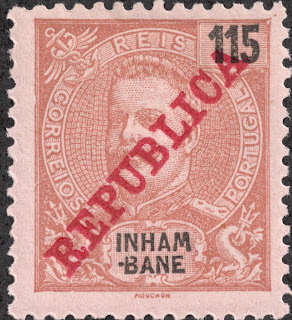 Of interest, there are three choices for each stamp space for the Vaco da Gama issue, as Macao, Portuguese Africa, and Timor all had these stamps overprinted for use in Inhambane.

There are no $10+ threshold stamps.

Comments
A) Expensive stamps ($10 threshold): None
B) (  ) around a number indicates a blank space choice. 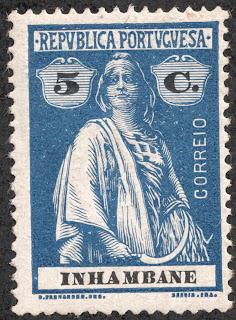 1914 Scott 78 5c deep blue
Out of the Blue
I find the repetitive designs used for every Portuguese colony a bit boring. But a bit of historical understanding is needed. Portugal was not a rich nation. So the colonies, which were many, got there stamps "on the cheap". ;-)

What I do find interesting are the exotic and remote places of many of the Portuguese colonies. Fascinating. It is curious, though, that Scott generally gives no increase in value for a used vs unused stamp. For me, a nicely postmarked Portuguese colony stamp means much more than simply an unused specimen.