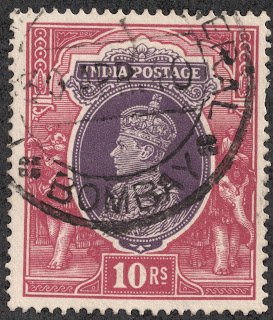 The Tea Act of 1773 gave it more autonomy in trade with the American colonies, and allowed it an exception from tea import duties which its colonial competitors had to pay.

Did the British East India Company lose the colonies for the Empire? The "Boston Tea Party", where its Tea was thrown into the Boston Harbor in 1773, was the flash point.

The stamps of the East India Company were first issued in 1854.

But following the Indian Rebellion of 1857, the British Crown assumed direct control of India. 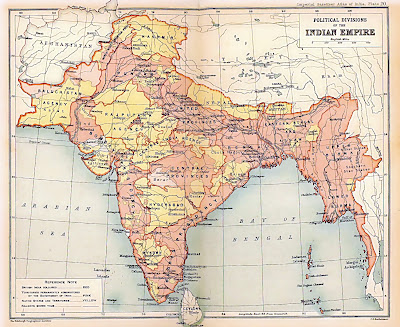 In 1947, when India and Pakistan became independent from Britain, there were 565 princely states! Most, though, were small, and had contracted out the business of government (and stamp issue production) to the British. The larger ones had their own treaties with Britain, spelling out the rights of the Prince.

We will meet the stamp issues of the Princely States in a future post.  This post will cover the "British India" regular stamp issues. 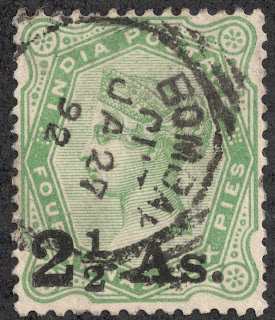 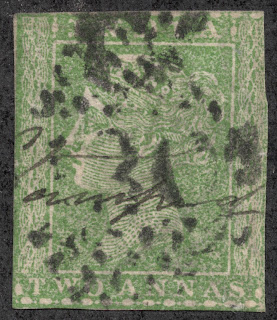 1854 Scott 5 2a green "Queen Victoria"
First Issue of the East India Company
The East India Company was still in power in India, when the first stamp issue was produced in 1854. The first six stamps were imperforate, and all had various designs featuring the Queen.
CV ranges from $20+- $40+ for three stamps, on up to the 1/2a red @ CV $1,000+.

Shown above is a 2a green, quite classic in appearance. 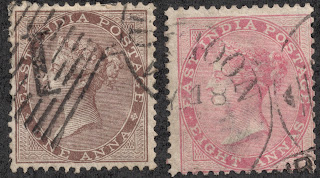 1855-64 Scott 12 1a brown & 1868 Scott 28 8a rose
Note the change in the Diadem
During the East India and Crown Colony era, the 1855 issue design had Maltese crosses in the Diadem. Note the 1a brown shown above.  The redrawing in 1868 changed the Diadem to rows of pearls and diamonds. This is shown with the 8a rose. 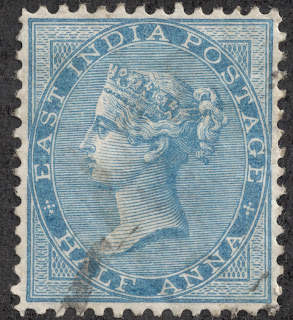 The 1/2 a blue shown above is the redrawn version (mouth deeply cut, nostril defined by curved line), compared to the 1865-67 stamp.

Of interest, the watermark usually found for the 1865-1876 stamps is the "Elephant's Head". 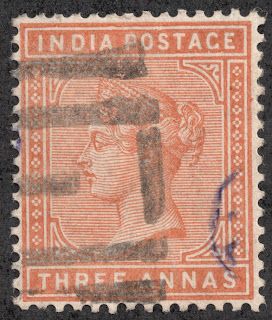 This might be a good time to look at watermarks... 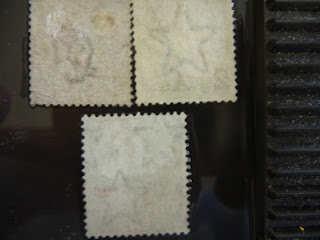 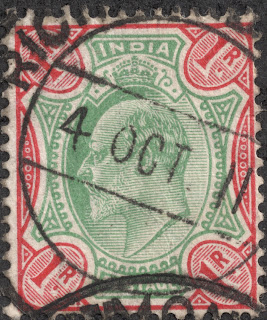 Although India has a reputation as a "hot" philatelic country, the CV prices actually seem modest for the India regular issues, IMHO. 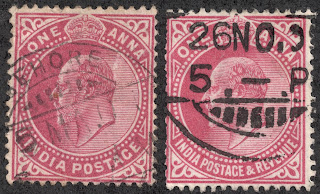 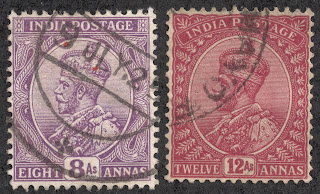 The watermark tray will be needed. ;-) 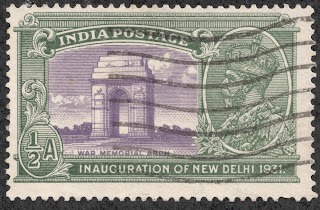 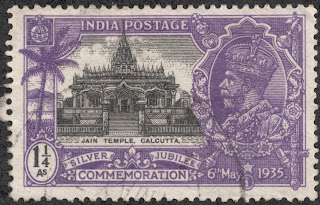 1935 Scott 145 1 1/2a violet & black "Silver Jubilee"
Especially nice in comparison to the generic issues for other colonies, are the "Silver Jubilee" stamps found for India. This 7 stamp set with various edifice scenes of India, has a CV of <$1-$6. 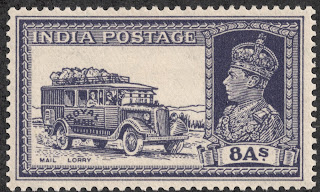 1937-40 Scott 160 8a blue violet "Mail Truck"
The George VI era stamps began in 1937, and the inaugural issue had 19 stamps. Besides the usual portrait stamps for the lower values, the issue had interesting pictorial scenes for the middle values, as shown above. CV for the set is  <$1-$1+ for 17 stamps. 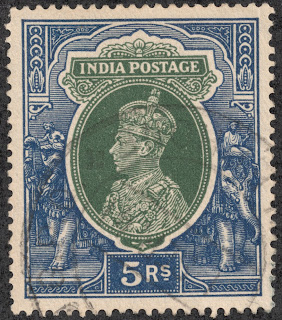 1937-40 Scott 164 5r deep ultramarine & dark green
"King George VI"
The higher values for the set were in a larger format, with a regal portraiture of "George VI". I love the elephants on each side of the portrait vignette.

Deep Blue
Deep Blue (Steiner) has 11 pages for the regular stamps through 1946, and follows the Scott catalogue exactly. 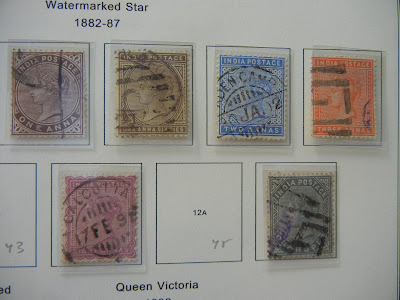 The 1882-87 "Empire" set for Queen Victoria in Deep Blue
An advantage of the Deep Blue album, in comparison to Big Blue, is a provision for a unique space for the stamps and issues that have different watermarks: most notably here the George V issues. 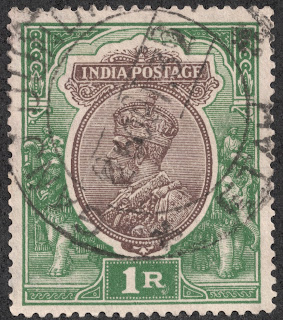 • There is only one regular issue that crosses the $35 threshold in BB, and three more that are between $10-$30+. Clearly, India for the regular issues is not that expensive for BB collectors.

• Two issues for George V (different watermarks), while the usual one space in BB. Here one has 15 spaces for 44 Scott major number stamps. Good luck. ;-)

• An illustrated  dilemma of truncated spaces in BB... 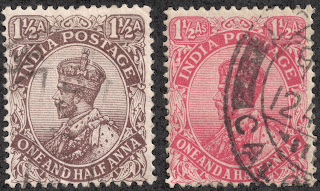 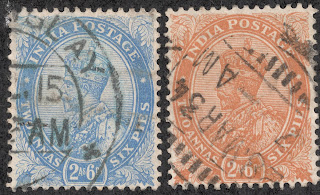 B) (   ) around a space indicates a blank space elective choice 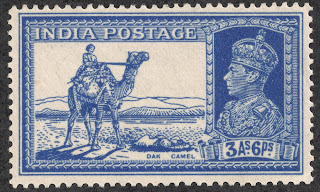 1937-40 Scott 157 3a6p ultramarine "Dak Camel"
Out of the Blue
Interesting history, interesting stamps. I frankly was expecting a generally higher CV for the regular issues, considering that India is a "hot" philatelic country.

If you are collecting with Big Blue, you may need to add a page for the George V stamps not given spaces.