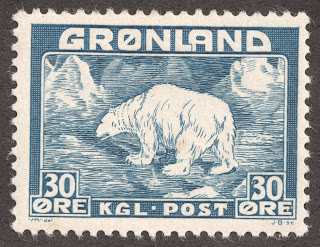 1938 Scott 7 30o blue "Polar Bear"
Quick History
Greenland, an island in the North Atlantic Ocean, was a Danish colony, and a colonial possession of Denmark (along with the Faroe Islands and the Danish West Indies). The Capital is Nuuk ( Godthaab) at 64 degrees north Latitude, about the same latitude as Fairbanks, Alaska (Incidentally, my brother lives in Fairbanks). The population was 16,000 in 1930; about 88% Inuit, and 12% Danes. It is the least densely populated country in the world.

Presently Greenland is an autonomous country within the Kingdom of Denmark.

According to the Icelandic sagas, Erik the Red and his family settled there, and called it "Greenland", in the hope that the attractive name would bring settlers.

The Greenland ice sheet covers 80% of the country. Therefore, the villages and towns are along the ice free coast. 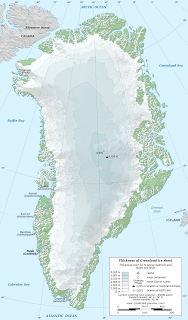 Map of Greenland and the ice sheet
Into the Deep Blue
The 2011 Scott Classic specialized catalogue has nine regular stamps listed for 1938-46, and eleven major number, and seven minor number Parcel Post stamps for 1905-1937. The Parcel Post stamps are CV $60-$700+; rather expensive, I don't have any, and I will say no more about them. ;-)

As mentioned, Greenland only issued a regular stamp set beginning in 1938. 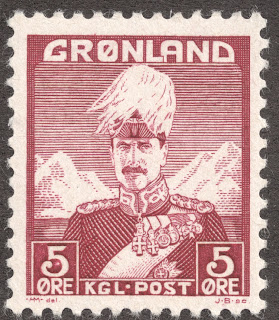 A rather striking design with the icebergs and ice shelf  in the background. 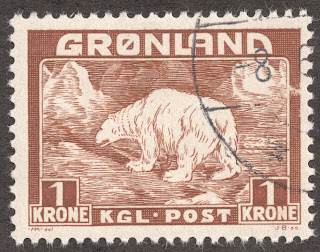 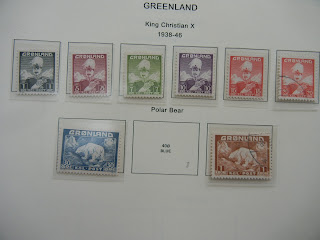 Deep Blue and Greenland
Deep Blue
Deep Blue (Steiner) has one page for the regular issues (illustrated above), and two pages for the parcel post issues. Of interest, Deep Blue also has a page for a five stamp 1935-38 Thule Local Post set; an issue that is not in Scott. 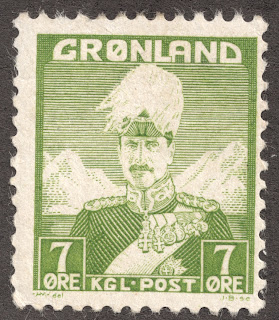 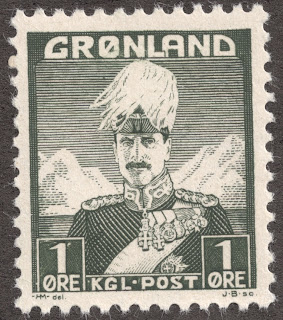 1938 Scott 1 1o olive black "Christian X"
Out of the Blue
I regret having to stop my collection at ~ 1940, as the Greenland stamp issues are just getting started. ;-)

Note: Map and picture image appear to be in the public domain. 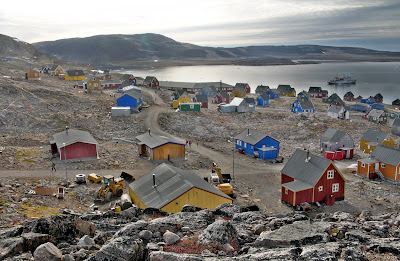 Village of Ittoqqortoormiit
Posted by Jim at 12:00 PM