If in the late 1930s you wished to go where polar bears roamed and icebergs floated by, booking passage to Greenland would have been a good choice. If you hadn’t the ready cash for such an excursion, collecting Greenland’s stamps offered a lesser but still alluring substitute. There are only twenty of them, all showing bears and/or ice. Moreover, back in the 1930s they were cheaper than Greenland trekking. The parcel post bears are pricey, but there are only eleven of those.

Today such cruises run from $6K to $40K to “please inquire,” still rather more costly than the stamps. But, sadly, Greenland is melting and polar bears are starving because of it. Cruise directors warn “don’t expect bear sightings”. So, given the choice, I’d rather buy stamps with the cash (that is, if I had it, which I don’t, unless I sell my stamps, which I won’t).

I suspect if one were to add up all the polar bears in stamp collectors’ albums their number would far exceed the human and bear populations of Greenland combined. People in 2017: 56,186. Polar bears in West Greenland: about 2,500; in the world 20,000 to 25,000. Linn’s Stamp News estimates about 250,000 people in the USA alone collect stamps. Do the math.

Some worry that the number of stamp collectors is declining, much like polar bears. A race to extinction, is it? I hope not.

Good cancels are scarce and usually more expensive than mint examples. The first two parcel post bears (above) have the more generic Grønlands Styrelse cancels while the third was cancelled in a northwestern village, Umanak, now spelled Uummannaq, which means heart-shaped in Greenlandic.

Census: seven in BB spaces, plus three parcel post bears. Contributions toward buying more of them are gratefully accepted.

Jim's Observations
Presently Greenland is an autonomous country within the Kingdom of Denmark.
According to the Icelandic sagas, Erik the Red and his family settled there, and called it "Greenland", in the hope that the attractive name would bring settlers. (Ironically. "Iceland" is mostly -if sparsely - green, while "Greenland" is ice, except around the edges.)

As noted, Greenland only issued a regular stamp set beginning in 1938. 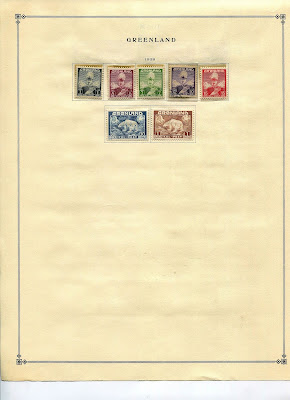