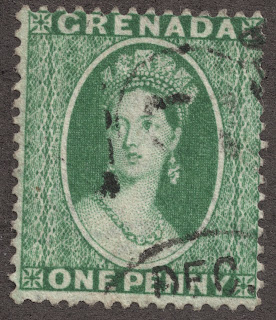 1875 Scott 7A 1p green "Queen Victoria"
Grenada has the "Chalon Head" design
Quick History
Grenada is an island at the southern end of the Grenadines. It is located in the Caribbean Sea northeast of Venezuela, northwest of Trinidad and Tobago, and southwest of Saint Vincent. The island originally was a French colony from 1689-1763, but became a British colony during the Seven Years' War  in 1763.

Nutmeg was introduced in 1843; and today Grenada is known as  the "Island of Spice", as it supplies 40% of the world's nutmeg.

In 1861, Grenada issued the 1p green and the 6p rose with the iconic "Chalon Head" portrait of Queen Elizabeth. Other countries that have issued the "Chalon Head" include Canada, Nova Scotia, Tasmania, New Zealand, The Bahamas, Natal, New Brunswick, Queensland, and Prince Edward Island.

Grenada remained a Crown Colony from 1877-1950, when moves towards autonomy by Grenadians - both peaceful and violent- occurred. Independence was granted in 1974.

In 1983 the U.S. lead an invasion to overthrow the  "People's Revolutionary Government".

Today Grenada is a member of the Commonwealth realm. 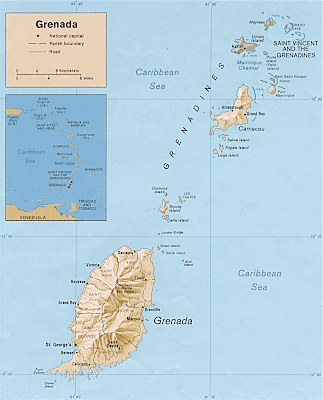 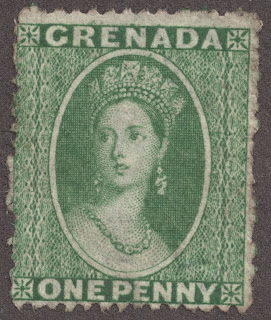 1864 Scott 3 1p green "Queen Victoria Chalon Head"
Rough Perf 14 to 16; wmk 5- "Small Star"
In 1861, Grenada first issued the 1p "Chalon Head" on unwatermarked paper. But in 1864, a watermarked variety was issued as illustrated above. Note the rough and ragged perforations. Contrast with the 1p green (Scott 7A), illustrated at the blog header, which was released in 1875 with clean cut 14 perforations.

This stunning design (Don't you agree?) had watermark 5 "Small Star", while the 1875 variety had a "Large Star". 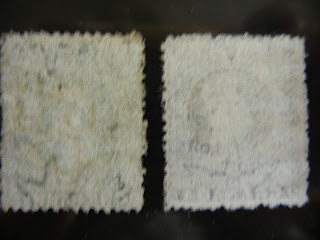 Left: wmk 5 "Small Star"; Right: wmk 6 "Large Star"
I took this pic without watermark fluid; that is how obvious the watermarks were on these examples. ;-)

But I had a bit of a problem matching Scott's color description to my Scott 7A.

Is it "Large Star" watermark? Check. The only possibility is Scott 7A.

What does Stanley Gibbons say?

Lesson: Take the Scott color descriptions with a grain of salt. 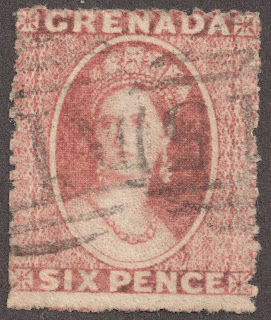 1863 Scott 4 6p rose
Rough perf 14-16; wmk "Small Star"
Another "Chalon Head" issue was the 1863 6p rose. Although the design is classic, the ragged perforations around the edges take away from the aesthetics of the stamp. 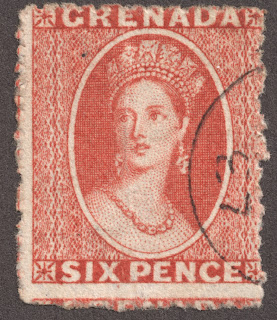 1881 Scott 8 1/2p purple & Scott 10 4p blue
1875 Scott 11 1sh purple surcharged in dark blue
Revenue Designs
Beginning in 1875, undenominated revenue stamps were surcharged with a value, and a "POSTAGE" overprint, which made them valid for regular postage.

CV for the surcharged revenue stamps illustrated above is $7+-$20. 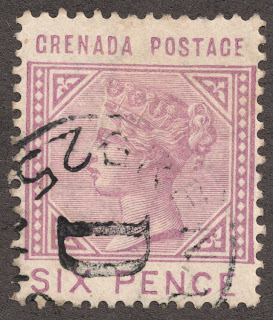 Confusingly, when I looked at the watermarks ( Colonial wmk 2- "Crown & C A") on this issue, many were inverted. Scott (and more fully SG) explains that alternate horizontal rows were printed inverted (tête-bêche), and therefore 50% of the watermarks will be found inverted. 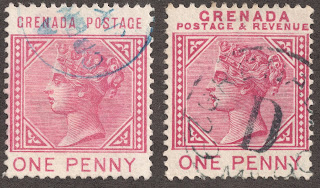 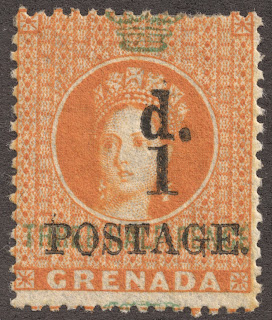 1886 Scott 27 1p on 1 1/2 p orange & green
Surcharged Revenue
As mentioned earlier, Grenada continued to surcharge revenue stamps for postal use. The above lovely example was issued in 1886. Do you think the 1p surcharge was slightly moved to the right side of the stamp to not deface the Queen? ;-)

By the way, I call this stamp the "Crying Chalon Head", because if one enlarges the image, there is a "tear" rolling down the right cheek of the Queen. 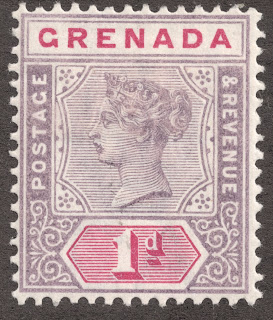 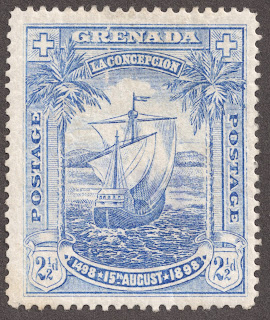 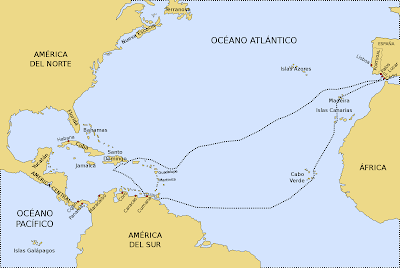 The third voyage of Christopher Columbus
Of interest, in August, 1498 during his third voyage,, Columbus had sighted the island and named it "Concepcion". 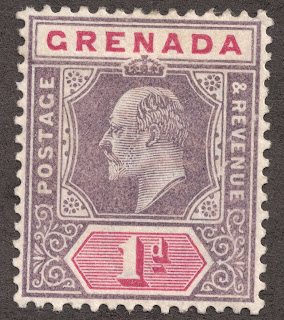 One will note the design similarities with the preceding "Victorian" issue.

If one needs a refresher on Crown Agent watermarks, see the Gibraltar blog post. ;-) 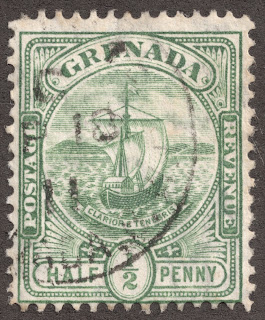 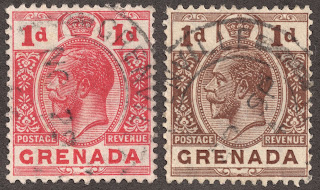 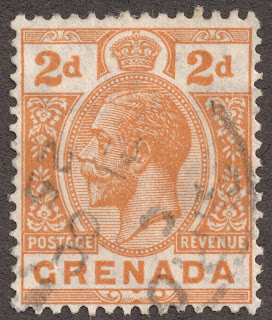 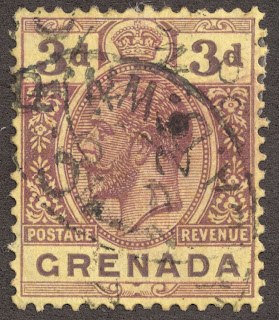 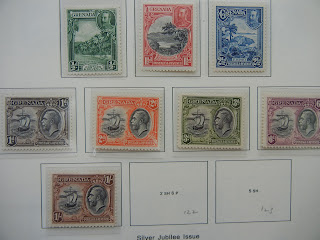 1934 George V  Pictorials in Deep Blue
Rather than just Kings, Queens, or Colony Seals, the 1934 set added pictorial scenes of Grenada. Actually, many British colonies during the 1930s had a similarly designed series. They tend to be one of the more popular stamp issue for today's British colonies collector. 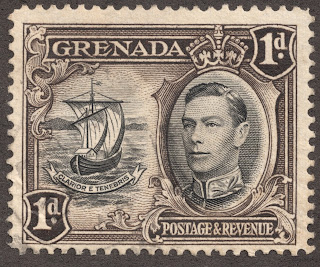 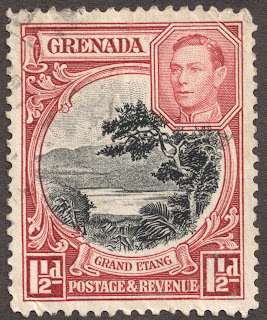 1938 Scott 134 1 1/2p scarlet & black "View of Grand Etang"
I think you will agree that the 1930s pictorial design stamps for Grenada in particular, and the British Colonies generally, are very nice indeed. ;-)

Here is a view of Grand Etang Lake, which is in a broken down volcanic caldera, and has been taken over by the tropical rain forest. Ah...., to be there now. :-) 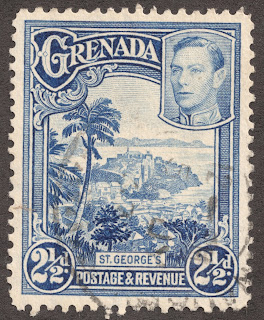 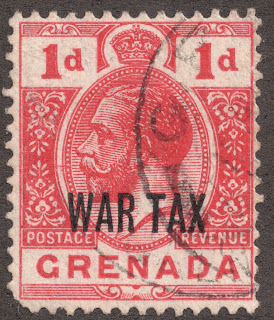 1916 War Tax Scott MR2 1p scarlet
Grenada only produced two War Tax stamps. Of interest, though, is the 1916 color of the 1p stamp is scarlet (Scott 80a). Contrast that with the more common carmine color, which is illustrated earlier in the blog. 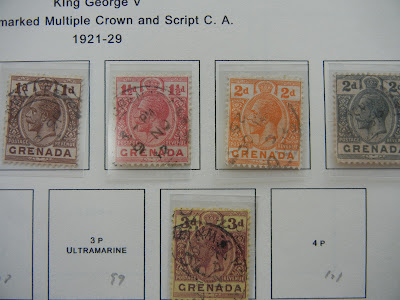 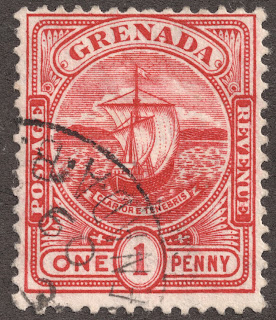 B) As per usual, both the King Edward VII and the George V issues with two watermarks are given one space. 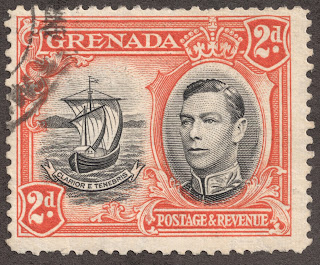 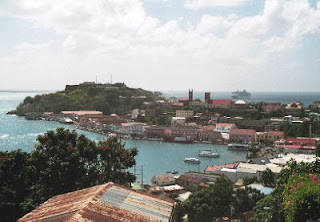