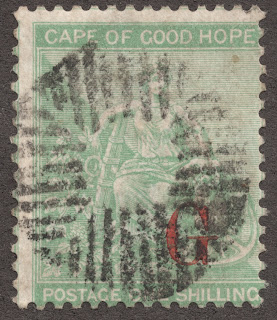 1877 Scott 15 1sh green
Overprinted red "G" on Cape of Good Hope
Quick History
If it wasn't for the newly discovered Diamond Fields, neither Transvaal (The Boars), or Cape Colony (The British) would have been interested in this backwater area. The Griqua had settled there to avoid the Europeans, and called it Griqualand West. (There was also a Griqualand  East, but they never issued stamps.)

In the early 1870s, diamonds were discovered.  The Big Hole was dug by 50,000 miners using picks and shovels, and eventually yielded 2,700 kg of diamonds. Cecil Rhodes, founder of De Beers, began his career there.

Since the Griqua knew they would not be able to withstand the European onslaught, they asked for British protection, the lesser of two unpalatable choices.

A Protectorate was declared from Cape Colony in 1871. Then, in just two years, the British declared that Griqualand West would become a Crown Colony. Kimberley, which swelled to a population of 40,000 in 1873, was made the Capital.

In 1880, Both Griqualand West and Griqualand East were annexed to the Cape Colony.

Although stamp production for Griqualand West ceased, the remaining stocks of overprinted stamps were subsequently used for postal duties in Cape Town and Cape Colony. 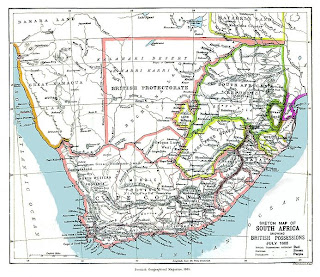 Inexpensive they are not. ;-)

In fact, Big Blue has never had Griqualand West as a country in the album.

But the history, the "Diamond Rush" swelling of population, and the resulting need for postal services and stamps, seems too good to pass up entirely, in my view. Some world wide classical collectors may want to have at least a representative collection from this fascinating period.

So expense one can control if one wants only a representative selection.

The second challenge is a bit more problematic.

Since all of the Griqualand West stamp production consisted of, usually, a single letter "G" overprinted on an inexpensive Cape of Good Hope stamp, Forgeries abound.

It behooves the generalist collector to have Griqualand West stamps certified as genuine.  - A piece of advice, that I have not, as yet, heeded for the stamps illustrated in the blog. :-( 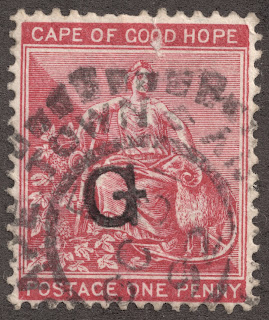 1878 Scott 71 1p rose with black "G" overprint
Note the Cape Town postmark?
In 1878, there were 29 more major numbers recognized by Scott, all with black overprint, and having nine different script overprints. 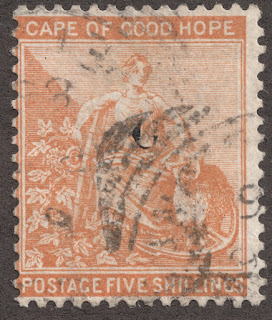 1878 Scott 102 5sh orange with black "G" overprint
This stamp is part of a 5 stamp grouping (Scott 97-102), which had the black "G" overprint applied. For some intuitive reason, I believe this overprint is genuine. ;-)  I'm not so sure of the other two examples.

Out of the Blue
Fascinating history of real world events represented by these pieces of paper. I should take my own advice about getting these certified though. ;-) 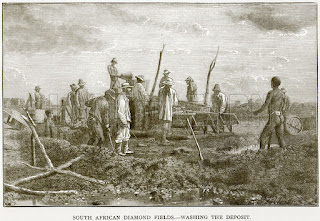