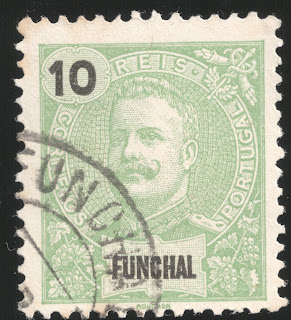 1897-1905 10r light green "King Carlos"
Quick History
Funchal is a the largest city in the Madeira island group, and is located off the coast of north Africa in the Atlantic Ocean. It was an administrative district, and issued stamps from 1892-1905, when then the stamps of Portugal were used. Today, it is still part of Portugal. The population was 150,000 in 1900. 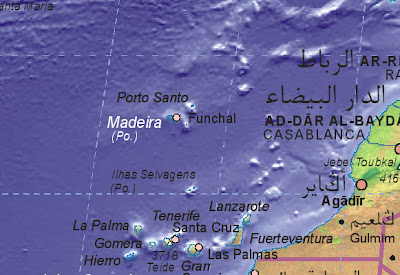 Location of Funchal and Madeira 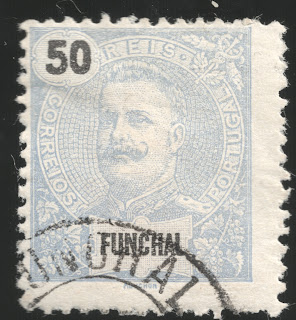 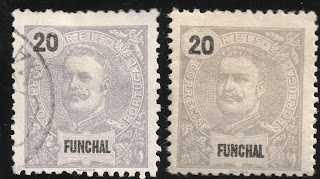 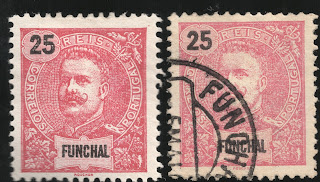 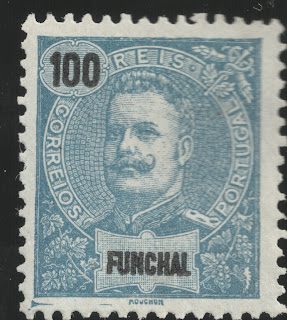 1897-1905 100r dark blue/blue "King Carlos"
Note the bluish paper
The higher denominations (75r-500r) are issued on various colored paper (blue,pink,yellow,rose, pale lilac,buff, pink). The example above has bluish paper that is quite obvious on visual inspection, perhaps less so on the scan. No doubt this was done as a  anti-counterfeiting measure. 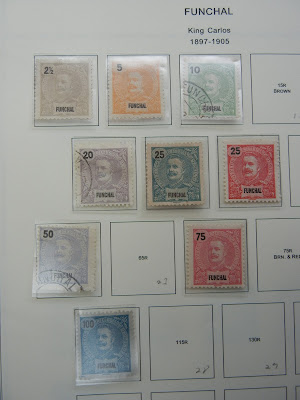 Layout in Deep Blue for the 1897-1905 issue
I do have a little quibble with the fact that Deep Blue does not provide spaces for the yellow paper varieties, or for the 13 1/2 perf varieties of the 1892-93 issue. Now admittedly, these varieties are minor numbers, but they are bolded minor numbers in Scott, compared to italic, and therefore are given prominence in the catalogue. In addition, these varieties are inexpensive, and easily accumulated. I have placed them on a separate supplemental quadrilled page. I suppose I could simply print out double pages for the varieties also. 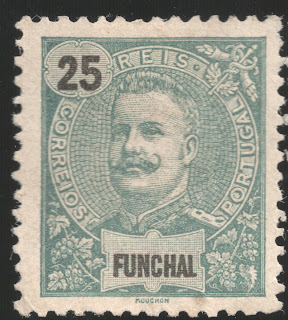 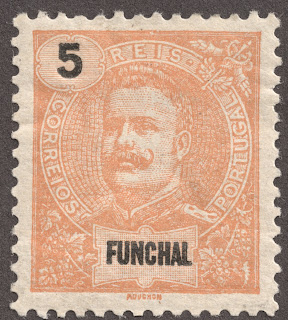 The designs, unfortunately, rarely illustrate the indigenous culture of the colony. Generally, the colony's name and the value is stamped generically on an image that all Portuguese colonies share.. France does this as well with the "Navigation and Commerce" colony stamps, but then the subsequent issues usually provides the colony with their own designs.

Maps appear to be in the Public domain.