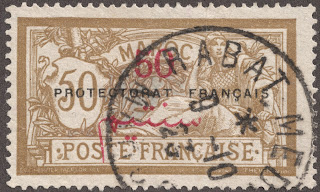 1914-21 50c on 50c bister brown & lavender
Overprinted "Protectorat Français"
Quick History
Located on the northwest coast of Africa, the French had Offices in Morocco from 1891, but most of Morocco became a French Protectorate under the Treaty of Fez in 1912. This Protectorate lasted until 1956, when Morocco established independence.

French Morocco consisted of the area between Fez and Rabat and Casablanca south to Marrakesh , Mogador (Essaouira) and Agadir. The north of the country was actually a Spanish protectorate. Tangier was an "international" city with a French presence. 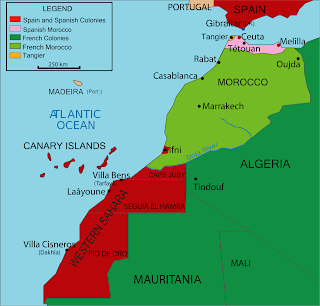 French Morocco Protectorate in 1912 ( light green)
Strictly speaking, the 'Protectorate" did not end the sovereignty of Morocco; the Sultan reigned but did not rule. Also, there was not much mixing of cultures; France practiced a version of apartheid in Morocco, building "Villes" next to "Medinas". 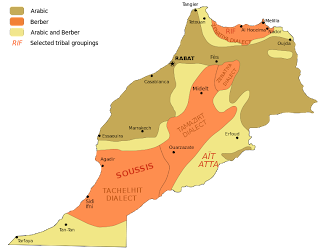 Arabic and Berber in Morocco
Today, about 90% of the population speaks Moroccan Arabic, with more than half able to speak Berber. French is the language of commerce and education. The Capital is Rabat, and the population was 4,400,000 in 1912. 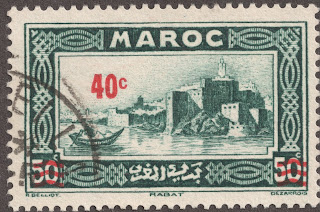 1939 40c on 50c  dark blue green surcharged in red
"Kasbah of the Oudayas, Rabat"
Into the Deep Blue
The 2011 Scott Classic catalogue has 300 descriptions for regular, semi-postal, air post, air post semi-postal, postage due, and parcel post categories for the years 1891-1942. The coverage consists of 37 "French offices in Morocco" entries, with the rest for the "French Protectorate" era. Also, Morocco proper under the Sultan issued 14 stamps in 1912-13. Of the group, 172 or 55% are reasonably at <$1-$1+. 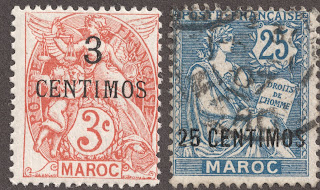 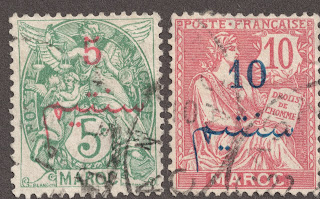 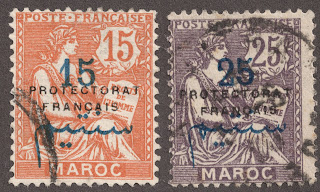 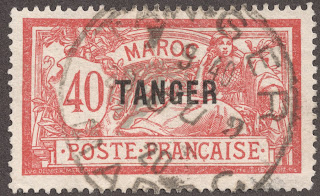 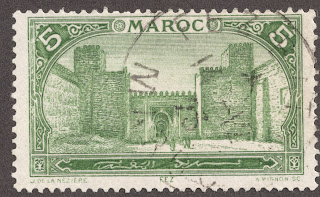 1917 engraved issue: 5c yellow green
"Mosque of the Andalusians, Fez"
In 1917 a 17 stamp engraved issue was produced featuring various "monuments" in French Morocco. Twelve stamps are valued at $3.50 or less. 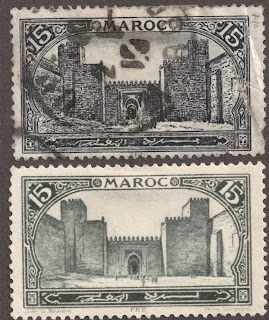 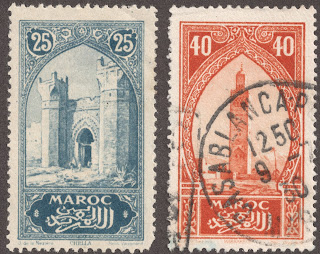 1923 -27 issue: 25c ultra "City Gate Chelia"
40c orange red ""Koutoubiah, Marrakesh"
The 1923-27 issue borrows many of the same scenes from the 1917 issue, but usually is printed in a different color, other than the stamps mentioned previously. This 26 stamp issue was printed in photogravure, and has an identifying "Helio Vaugirard" imprint on the lower right margin of the stamp. 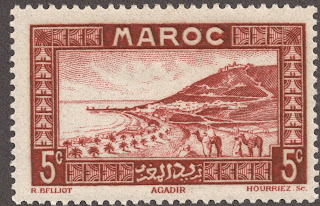 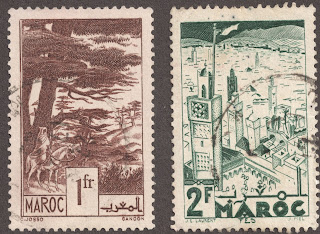 1939-42 1fr chocolate "Cedars" & 2fr prussian green "Fez"
The 1939-42 issue had a much more "modern" design, compared to the previous issue, as one can clearly observe. This 37 stamp eight design series spills over until 1942, but is included in the Deep Blue pages. Big Blue has some of these stamps in Part I, and some in the Part II volume. 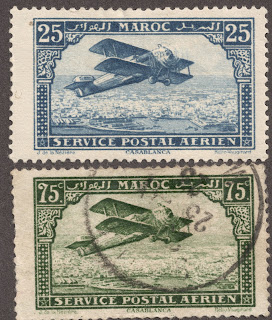 1922-27 25c deep ultra & 75c deep green "Biplane over Casablanca"
These denominations can be found in different types
The 1922-27 eleven stamp Air Post issue has some interesting types; specifically the 25c,50c,75c, and 1fr.
Some come with a hyphen in the "Helio-Vaugirard" imprint ( The 25c illustrated), or a thicker frame (The 75c above). Take a look at your collection for differences. ;-)

Deep Blue
French Morocco has 22 pages in the Deep Blue album,, and presently I have stamps on 18 pages. All of the Scott major numbers are represented.

Comments....
1) The 1939-42 issue has 37 stamps, 12 of them issued between 1940-42. They are all included in the classic package download at the Bill Steiner website. So far so good. ;-)  But there are actually additional stamps issued later in the 1940's in the series. These stamps have no space (naturally) in Deep Blue, and can lead to confusion.

2) The Scott catalogue mentions, but does not list the Sultan of Morocco government stamp issue of 1912-13 in the "French Morocco" section. These are listed, however, under Morocco in the catalogue. There were 14 stamps issued, 10 of them between $1+-$9+ CV. These "Cherifien Posts Issues" are given space in Deep Blue. 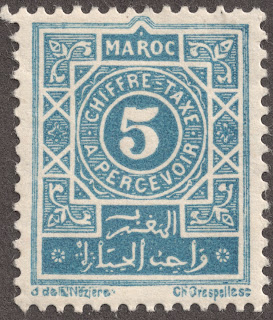 Comments...
1) The coverage looks good for the inexpensive French Moroccan stamps.
2) The 1939 issue has 26 spaces (Deep Blue has 37 spaces), as BB cuts off coverage at 1940. Additional spaces for the issue, which continues into 1942 and beyond, can be found in the Part II volume of the International. 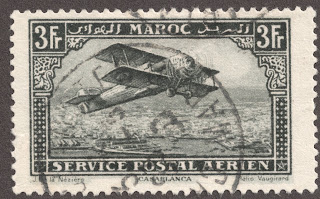 1922-27 air post 3fr gray black "Biplane over Casablanca"
Out of the Blue
The French designers of Moroccan stamps had the good sense to make the issues culturally appropriate for this Arabic and Berber Islamic country. Certainly, much different designs are found here than for French India (Brahma-also appropriate), or French Guinea. In general, the British Colonial stamps do not show as much cultural design work for a country, as they are on purpose heavily themed with the British Monarch.