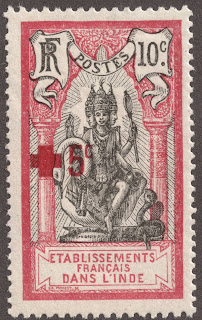 1916 semi-postal 10c + 5c rose & black "Brahma"
Quick History
French India refers to the French possessions in India. They include Pondichéry ( Puducherry), Karikal and Yanaon (Yanam) on the Coromandel Coast, Mahé on the Malar Coast, and Chandernagor in Bengal. 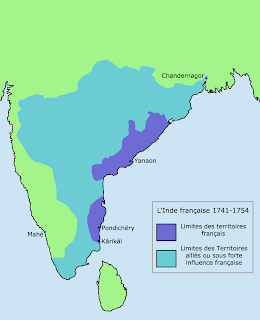 Largest extent of French influence 1741-54
The French had much greater influence in the mid-eighteen century, but after losing conflicts first with the Dutch, then with the British, their influence shrank by the twentieth century to just the settlements listed. By 1941, the area for French India was 196 square miles, the population was 320,000, and the administrative Capital was Pondichéry. By 1954, all of the French holdings were de facto part of the Indian Union. But the French influence (language, architecture, churches, culture) today remains strong in Pondicherry and Yanam. 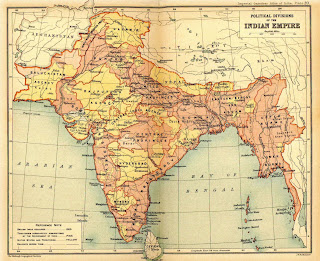 1909 map outlining British India holdings
A careful look will reveal Pondichéry labeled as French
Into the Deep Blue
The 2011 Scott Classic Specialized catalogue, beginning in 1892, has 141 descriptions for regular, semi-postal and postage due categories. 74 are valued at <$1-$1+. 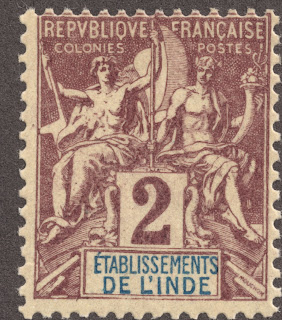 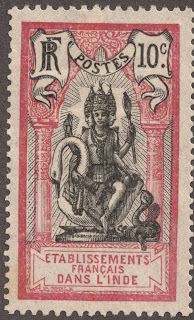 1914-22 10c deep rose & black "Brahma"
The first design intended specifically for French India features Brahma, the Hindu God (Deva) of creation. This design and series, from 1914-22, was found on 15 stamps, with another 10 stamps illustrating the "Kali Temple near Pondichéry". This issue is inexpensive, with 18 stamps <$1+. 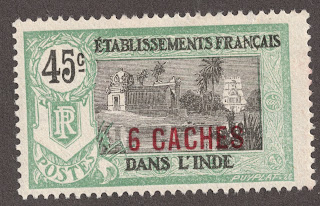 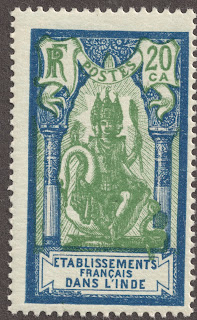 1929 20ca dark blue & green /bluish "Brahma"
A non surcharged series with the new monetary denominations was issued in 1929 with the same design themes as the previous issues. 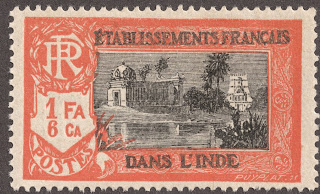 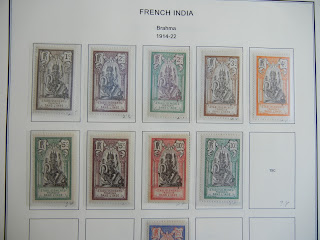 Deep Blue page for the 1914-22 "Brahma" design
Deep Blue has two pages for the the 1914-22 issue; note all the color combinations used by the French on these stamps. 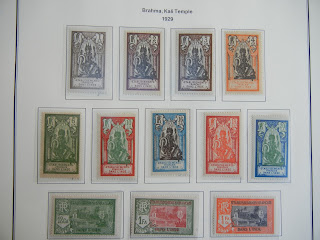 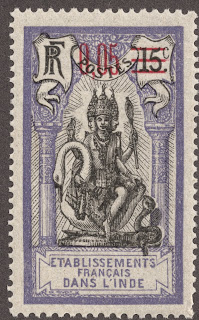 1922 5c on 15c violet & black with red surcharge
Big Blue
Big Blue,'69, on three pages, has 84 spaces. Coverage is 60%. It appears BB provides for a representative collection; perhaps only faulted for not providing quite enough spaces for these mostly inexpensive issues.

Comments
A) ( ) around a number indicates a suggested blank space choice.
B) Expensive stamps ($10 threshold):
None 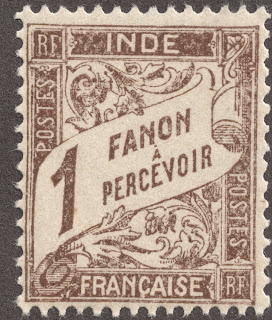 1929 postage due 1fa brown
Out of the Blue
If it wasn't for these postage issues, one wonders how many people would even be aware there was a French presence in India?