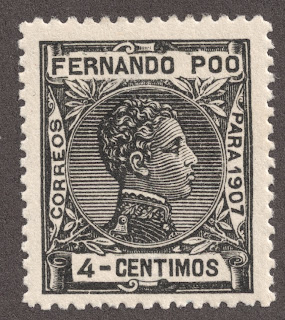 1907 4c black "King Alfonso XIII"
Issued with control numbers on the back of the stamp
Quick History
Fernando Po ( now Bioko) is an island located 20  miles of the west coast of Africa by Cameroon in the Gulf of Guinea. The island was found by the Portuguese navigator Fernao do Po in 1472.  The island is about 45 miles long by 20 miles across. The Capital then was Santa Isabel, and the population was 20,000 in 1930. Of interest, the island was inhabited by the Bubi ethnic group, which speak a Bantu dialect.

Today, Fernando Po ( Bioko) is part of Equatorial Guinea. Reflecting its Spanish colony heritage, Equatorial Guinea is the only country in Africa today with Spanish as the official language. 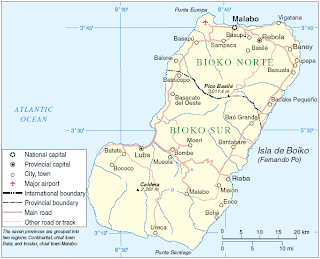 Fernando Po (Bioko)
Into the Deep Blue
Affordable Collectability
The 2011 Scott Classic Specialized catalogue has, from 1868-1908, and 1929, 176 major stamp descriptions. 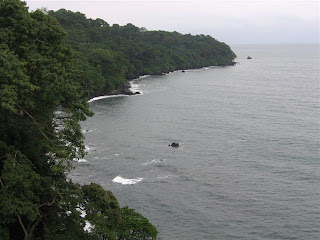 Coastline of Fernando Po (Bioko) today
The island is covered with tropical forests
Big Blue
Big Blue has one full page for the issues of Fernando Po, and has 23 stamp spaces, beginning with the 1899 King Alfonso XIII issue. The section is found in the '69 edition after Estonia. 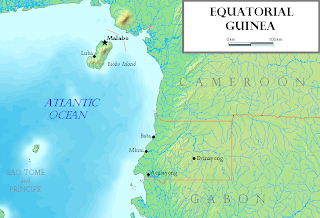 Equatorial Guinea
Incorporates all the former Spanish Guinea Colony lands
Out of the Blue
"Cheap", but where are they? :-) One will need to hunt specifically for these Spanish colony stamp issues, as generally not found in abundance in general collections.

Note: Maps and pictorial image appear to be in the public domain.