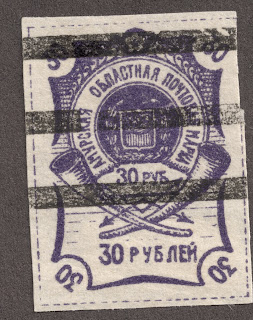 1921 Scott 46 30r dark violet
Blagoveshchensk Local Issue
Quick History
Happy Thanksgiving!
The Far Eastern Republic was basically set up as a buffer state between  the Russian Soviet Federative Socialist Republic (which largely controlled the Far Eastern Republic), and the territories occupied by Japan during the Russian Civil War. The Republic existed from April 1920 to November, 1922.  When the Civil War ended and the Japanese left Vladivostock, Soviet Russia then absorbed the territory.

The Capital initially was Verkho-Udinsk ( Ulan-Ude), but was moved to Chita in October, 1920. The Far Eastern Republic consisted of four provinces of the former Russian empire: namely Trans-Baikal, Amur, the Maritime Province, and the northern portion of Sakhalin island. (See Map.) The population was 1,500,000. 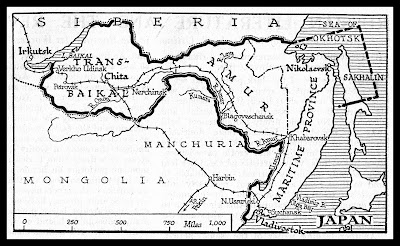 The Provinces of the Far Eastern Republic
Into the Deep Blue
Affordable collectability
The 2011 Scott Classic Specialized catalogue has  65 major stamp descriptions for the years 1920-23. "Affordable" stamps can be found from the 1920 Vladivostok Issue -Russian stamps surcharged/overprinted- (3), 1921 Chita issue (4), 1921 Blagoveschchensk issue (5), 1922 Chita issue (10), and 1923 Vladivostok issue-Russian stamps surcharged-(5), for a total of 27 stamps.
Affordability Index (<$5) = 42%.

Especially inexpensive (<$1) are fourteen stamps from the 1922 Chitna and 1923 Vladivostok issues.


A closer look at the stamps and issues
I love where history and stamps intertwine, and the Far Eastern Republic stamps certainly qualify! A number of the stamps are surcharged or overprinted as one would expect in a chaotic and fluid historical scene. The most expensive FER stamp is a 1920 Russian surcharged occupation stamp (General Semenov), Scott N1, valued at $100. 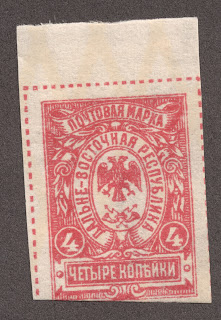 1921 Scott 39 4k rose
Chita Issue
The 1921 , as well as the 1922 Chita Issues had their own designs, and provide 14 stamps in total that are inexpensive for the Deep Blue collector. The 1921 issue is typographed, while the 1922 issue (not illustrated here) is lithographed.  An internet source says the print run for the 4k above was 600,000, and valuation was in gold kopecks. The design shows a Provisional Government eagle with the text "Far Eastern Republic" inscribed around the coat of arms. 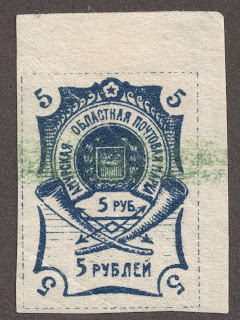 1921 Scott 44 5r dark blue
Blagoveshchensk Issue
Blagoveshchensk was a city in the Amur province that issued these stamps locally in 1921, according to Scott. But an internet source says the stamps were issued in October, 1920. Note the posthorns in the design. :-) Scott states the remainders were cancelled in colored crayon or by typographed bars, and sell for half of the specified value. Apparently, there are very few true used stamps, with the vast majority "remaindered".
You might note the green crayon cancel on the stamp above, as well as the bars over the 30r dark violet stamp illustrated at the beginning of this blog. ;-) 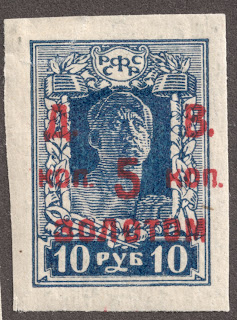 1923 Scott 68 5k on 10r blue with red surcharge
Vladivostock Issue: Russian stamps of 1922-23 surcharged
Vladivostock actually split away from the Far Eastern Republic in May, 1921, and this is a locally overprinted issue. All five stamps are inexpensive for Deep Blue collectors.

Deep Blue
The Far Eastern Republic stamp offerings are on four pages of Deep Blue, and follow exactly the Scott major number sequence. No problem at all.


Big Blue
Big Blue, on one line, has eight spaces; four for the 1921 Chitna issue, and four spaces for the 1922 Chitna issue. The most expensive offering is $3. Big Blue does leave some 19 stamps that are inexpensive out of the album. The Far Eastern Republic section can be found after the Dutch Indies and Epirus in the '69, and after Ecuador and Epirus in the '47/'41 editions. 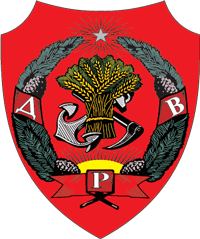 Far Eastern Republic
Coat of Arms
Out of the Blue
War and revolution are generally not pleasant, but they do leave interesting stamp issues behind. :-)


Note: Map appear to be in the public domain