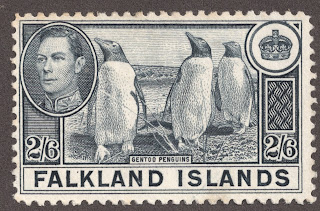 1838 Scott 93 2sh6p gray black "Gentoo penguins"
Quick History
The Falkland Islands consist of East Falkland and West Falkland, and well over 700 lesser islands about 300 miles from the coast of South America in the South Atlantic Ocean. Although claimed also by Argentina ( see 1982 Falkland Islands War), it has been governed by British rule since 1833. A British Crown Colony ( and now a British Overseas Territory), the population was 2400 in 1931, and the Capital is Stanley.

Stamps with a portrait of Queen Victoria were first issued in 1878.

The Falkland Islands Dependencies was an arrangement to administer the claimed British territories in sub-Antarctica and Antarctica from 1843 until 1985. They were governed by Britain through the Falkland Islands Government. The Dependencies really are not inhabited, except for base and research personnel. Overprinted 1938 Falkland Island stamps were issued in 1944 for Graham Land ( on the Antarctic Peninsula), South Georgia ( a few scientists and support staff live there; "town" is Grytviken), South Orkneys ( British Antarctic Survey has a base there), and the South Shetland Islands ( several countries maintain research stations there). 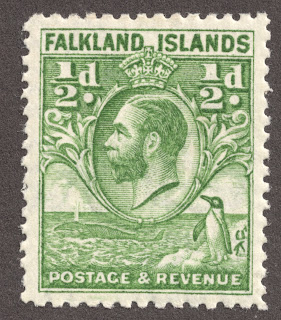 Falkland Islands stamps, as a British colony, and located in an interesting part of the world for collectors, are generally rather expensive.  The most expensive is the iconic 1933 £1 rose & black "King George V" @ $2000. Nevertheless, there are definitely affordable attractive stamps available. 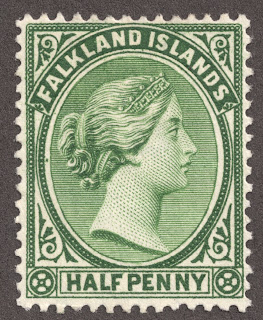 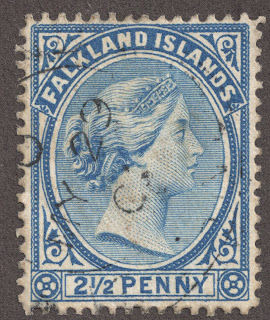 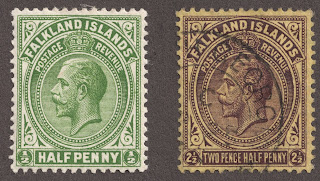 1912-14 1/2p yellow green & 1921-29 2 1/2p violet on yellow "King George V"
The 1912-14 issue (11 stamps) has wmk 3, while the 1921-29 issue (8 stamps) is wmk 4
As is often the case with British colonies, there are two issues of the George V definitives separated by watermark differences. The Multiple Crown  and C A wmk (wmk 3) is found on the 1912-14 issue, while the Multiple Crown and Script C A  wmk (wmk 4) is on the 1912-14 issue. Since valuations are indeed different, it is more or less necessary that the watermark be determined. Fortunately for the WW collector, watermark determination for these stamps is usually not that difficult. 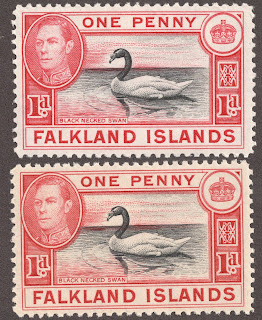 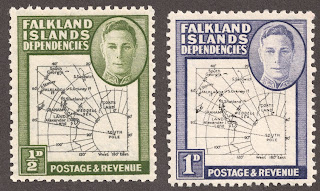 1946 & 1948 Falkland Islands Dependencies
The 1946 map  is "coarse", while the 1948 issue is "fine"
The Map stamps of the Falkland Islands Dependencies are quite interesting. The 1946 issue has a map that is drawn in a thicker and more coarse way. Note that the 0 degrees Longitude line goes right through the "S" of "Coats". The 1948 issue is drawn finer, and the 0 degrees longitude line is not drawn through the "S". Scott makes a note of the two issues, but does not give them separate numbers, while SG does give them their own numbers. Deep Blue also separates out the two issues. Also, there are at least six engraving errors for these stamps, which SG illustrates.
As you no doubt have realized, I am including the 1940-52 year British Commonwealth stamps for discussion as it makes a lot of sense, and Deep Blue includes these pages in their classical era PDF files.
Deep Blue
Deep Blue actually provides more spaces than the Scott major numbers; specifically, as mentioned above, for both the 1946 & 1948 Falkland Islands Dependencies Map stamp issues. I'm grateful. :-) Naturally, Deep Blue provides separate spaces for the King George V 1912-14 & 1921-29 issues based on different watermarks. I'm so used to BB, that it seems a luxury. ;-)
There is one possible mixup in Deep Blue. On the first page there is a space for a 1p "Watermarked Crown and CA sideways 1891". I believe this was one of the stamps that was officially bisected in 1891 to 1/2p and used as such. The bisect was from a 1p 1886 issue or a 1891 issue - so Deep Blue does provide two spaces for these bisect issues.  The bisects themselves are rather expensive ($300), so I will not talk about them anymore. But what stamp -1p "Watermarked Crown and CA sideways 1891" should go in the space mentioned? I can't find any that meet the criteria. The 1886 stamp (Scott 7) is watermarked sideways, but is a 1886 stamp, not a 1891 stamp. And Deep Blue already provides a space for this stamp. Then there is a Scott 5a stamp -1p claret-that was bisected, but does not have a sideways watermark. There is also a 5c 1p red brown ('91), that was not bisected (according to Scott), but also does not have a sideways watermark. But hold on! SG lists a '91 red-brown (SG 11), as a bisect! But this stamp's watermark is upright. So I can find a stamp that is watermarked sideways, but not a 1991 issue. And I can find a stamp ( or two?) that is a 1991 issue, but not watermarked sideways. I actually think Scott 5a ($190+) - as it is not offered a space before-should go there. But it is not watermarked sideways. Very confusing. Of course, this discussion is moot if we are concentrating on affordable WW stamps. ;-) 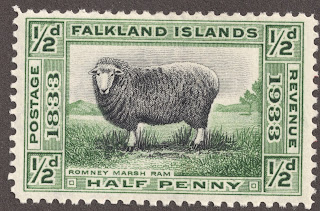 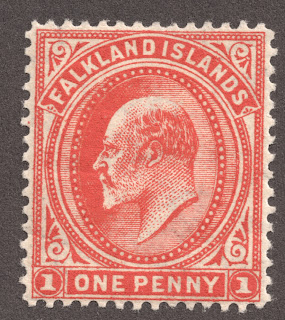 1904-07 Scott 23 1p red "King Edward VII"
Found with wmk 3 sideways or upright (23a)
Out of the Blue
Really, quite interesting issues, although the color varieties of the Victorians are challenging indeed. The 1933 Falkland islands Pictorials probably rank as one of the all time great British colonial stamp issues. Unfortunately, besides the first two ( the 1/2p & 1p), the next six are generally in the $20-$50 category, and then goes up from there. :-(
Note: Maps appear to be in the public domain
Would like to hear From you! 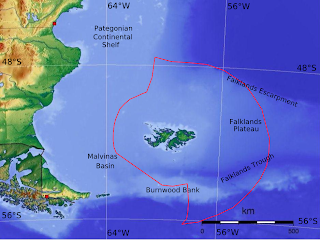 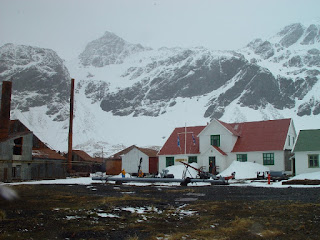