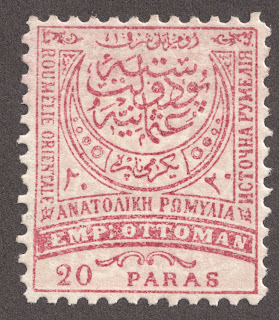 1884 Scott 17 20pa carmine & pale rose "Eastern Rumelia"
Stamp is in four languages: French,Greek, Bulgarian, and Turkish
Quick History
Eastern Rumelia was an autonomous province of the Ottoman Empire from 1878, created by the Treaty of Berlin in the same year. The Treaty of Berlin also recognized the rights of sovereignty for Romania, Serbia, and Montenegro, along with affirming the autonomy of the Principality of  Bulgaria. The other nations party to the Treaty wished to prevent a Russophile "Greater Bulgaria" from developing. In fact, the Kingdoms of Romania (1881), Serbia (1882), and Montenegro(1910) did occur.

Now Eastern Rumelia (Known as Northern Thrace to many) consisted of 70% ethnic Bulgarians, and 20% Turks and Muslim Bulgarians. The inevitable naturally occurred, and by 1885  Eastern Rumelia was under Bulgarian control, with Bulgarian stamps now used for the territory. This reality was not formally recognized until 1908.

But, happily for philatelists, Eastern Rumelia had stamp issues between 1880-1885. 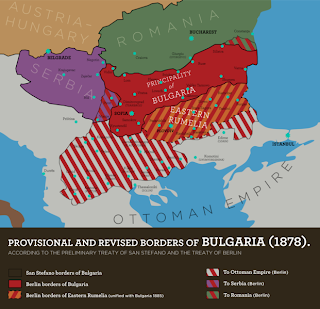 Bulgaria divided after the 1878 Treaty of Berlin
Big Blue Picture
Unhappily for Big Blue collectors, Eastern Rumelia was removed from the '69 edition, and did not return in the '97 edition. The '47 and '41 editions had, on one line of one page, seven Ottoman Empire inscribed 1881 & 1884 stamp issue spaces. The 2011 Scott Classic Specialized catalogue has 40 major stamp descriptions. Coverage is 18%.

The initial 1880 issue were stamps of Turkey overprinted R.O. (Roumelie Orientale) in blue. The least expensive stamp is $40+, and the issue does not appear in the '47/'41 Big Blue.

In 1885, the stamps of Eastern Rumelia were overprinted or handstamped with the Bulgarian Lion image. These are considered "South Bulgaria" issues, just prior to Bulgarian stamps being used in 1886. Stamps that are <$20 in cost include Scott 25, 27, and 38. These are interesting stamps, but again are not in the '47/'41 Big Blue.

The stamps that ARE in Big Blue are the Ottoman Empire "Crescent and Turkish Inscriptions of Value" of 1881 and 1884. They look similar to other Turkish stamps, except they have the "Roumelie Orientale" inscription down the left side. In fact, the province is named in four languages and scripts: Turkish (arabic), French (latin), Greek (greek), and Bulgarian (cyrillic). Talk about a language/ethnic crossroads!

The prices for the stamps in Big Blue are inexpensive (<$1-$2+).  That would certainly argue that price was not the reason Eastern Rumelia was removed from the '69 edition. But  other than the stamps I mentioned earlier, there is only one additional (1884 Scott 18(<$1)) stamp I can suggest. 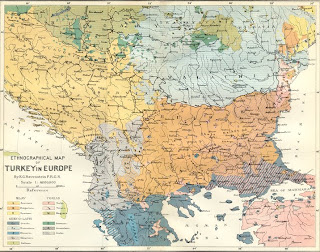 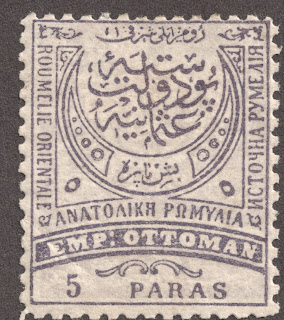 1884 Scott 15 5pa lilac & pale lilac "Eastern Rumelia"
Includes Crescent and Turkish Value Inscriptions
Kinds of Blue
The Eastern Rumelia section is not in the '69 and '97 editions.
The '47 and '41 editions are identical in content. 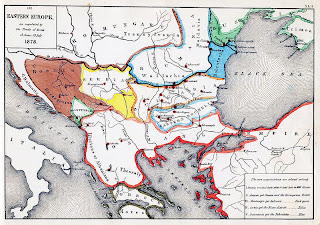 Overview of Southeastern Europe after the 1878 Treaty of Berlin
Big Blue Bottom Line
I'm including a number of maps on this blog because of the interesting crossroads of language and ethnicity represented in and around this territory. That is a good reason enough to find room for these stamps in the '69 and '97 editions. ;-)

If you have comments to share, by all means do so.
Thanks!
Posted by Jim at 2:43 PM