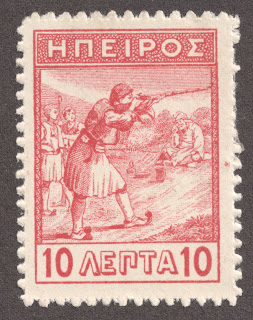 1914 Scott 7 10 lepta carmine
"Infantryman with Rifle"
Quick History
This Territory in the western Balkans was long part of the Ottoman Empire, but during the Balkan wars (1912-13), Greece seized Northern Epirus. However, the Florence Protocol assigned the territory of Northern Epirus to the newly created state of Albania. This decision was highly unpopular with the majority Greeks in the area, and although Greece officially withdrew, there was an uprising  and revolt  among the local Greek population.  The rebels declared independence and announced the Autonomous Republic of Northern Epirus in February, 1914. Provisional government stamps were issued. They in fact did gain autonomy (under a nominal Albanian sovereignty), and were recognized under the Protocol of Corfu by the Albanians. The population was 128,000 Orthodox Christians and 95,000 Muslims in 1908, and the Capital was Argyrokastron.

However,  WWI broke out, Albania collapsed, and Greece reentered the area in October, 1914. The provisional government ceased to exist, having accomplished its objectives. Greece occupied northern Epirus through 1916, and overprinted Greek occupation stamps were issued. The Italians drove out he Greek forces in 1916, and the French occupied Koritsa.

Ultimately the area was ceded to Albania in 1921 ( with Italian backing).

During  WWII, the area was occupied by the Italians and the Germans. After WWII,  the territory ultimately remained part of communist Albania. 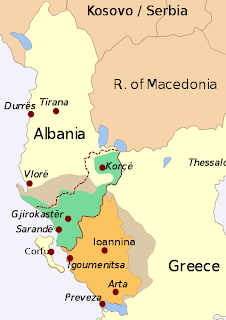 Northern Epirus is between the red solid and red dotted lines.
The green area is majority Greek speaking.
Big Blue Picture
The '97 Big blue, on one page, has 14 stamp spaces for the 1914 Epirus issues, and 6 stamp spaces for  the 1914-15 Greek occupation issues, for a total of 20 stamp spaces. The 2011 Scott Classic Specialized catalogue has major stamp descriptions for 41 Epirus stamps and 27 Greek occupation stamps, for a total of 68 stamps. Coverage by Big Blue is 29%.

What a convoluted history. Naturally the provisional government stamps show fighting ( Infantryman), and a call to nationalism ( Epirus flag). The flag design borrows the white cross on blue image of Greece with the double headed eagle overlaying.

Although there are some expensively priced Epirus stamp issues, I did find eight additional stamps that could be considered by the Big Blue collector. 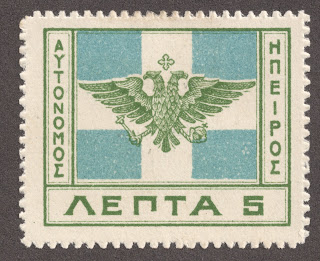 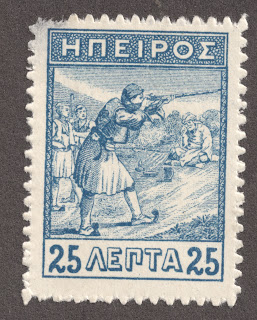 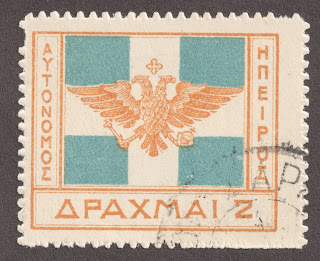