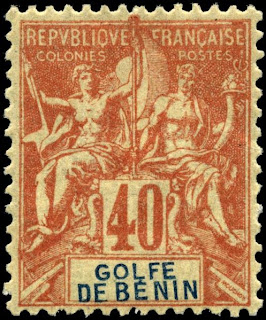 1893 Scott 29 40c red/straw "Navigation and Commerce"
Quick History
Between the 17th and 19th century, the land on African's west coast by the Gulf of Guinea was ruled by the Kingdom of Dahomey. The area was known as the slave coast, because of the trans-Atlantic slave trade. In 1892, the slave trade was banned, and France made it a Possession. The stamps of the French colonies were used from 1892-1894. The Capital was Benin with an area population of about 500,000. In 1895, Benin became part of the Dahomey colony. Then in 1899, the land became part of the French West African colony.

In 1960, Dahomey became independent. After some years of Marxist-Leninist dictatorship and turmoil, it was renamed the Republic of Benin in 1991.

Historical Fact: The Kingdom of Dahomey from the 17th to the 19th century sold their war captives into slavery; otherwise the captives would have been killed in a ceremony known as the Annual Custom.

Big Blue Picture
Big Blue (1997), on one line of one page offers 7 stamp spaces for the 1893 and 1894 French Colony issues.
The 2011 Scott Classic Specialized catalogue  has 49 major stamp descriptions beginning with the handstamped "Benin" issues of 1892. Coverage is 14%.

In the '69, edition, Benin is located at the end of the page with Bavaria and Batum, and before Bechuanaland Protectorate. Of interest, Benin is not listed in the "Sequence of Countries in this Album" list in the '69. ! 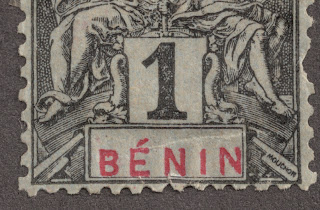 Big Blue Bottom Line.
Part of the French colonies, and therefore no true bargains. But reviewing the area history, a sobering reminder what man will do to man.

Note: Stamp image (Scott 29), map appear to be in the public domain.