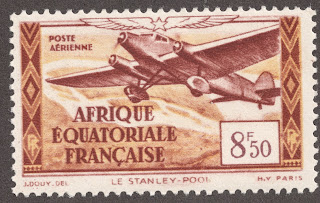 1937 Air Post 8.50fr red brown & yellow
"Trimotor over Stanley Pool"
Quick History
French Equatorial Africa stamps were issued exclusively after 1936, but the name has existed since 1910. Then Gabon and Middle Congo with its military dependencies were politically united as French Equatorial Africa, although each colony had administrative autonomy and had their own stamp issues. Ubangi-Chari-Chad was made an autonomous colony in 1915, and then in 1920 Chad was made an autonomous colony. The four colonies listed above were administratively united as one colony in 1934, and consequently the separate colonies stopped their own stamp issues in 1936. So to summarize: French Equatorial Africa consisted of four dependencies; namely Middle Congo, Ubangi-Shari, Chad and Gabon. 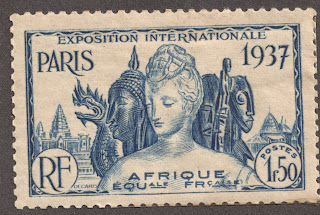 1937 1.50fr ultramarine Paris International Exposition Issue
Common Design Type: "Cultural Treasures of the Colonies"
Into the Deep Blue
The Scott Classic Specialized catalogue, beginning in 1936,  has 167 descriptions for regular, semi-postal, air post, and postage due categories. 139 are less than $5. Affordability index= 83%. Although "affordable", they are not cheap, as many are valued in the $1-$2 range. The most expensive are two air post stamps (1940-41 C9 & C11) @ $240.

A close look at the stamps and issues 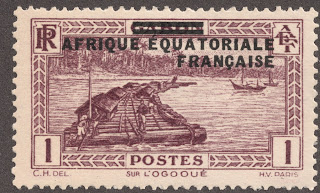 Note: Since Big Blue provides no spaces for this issue in the FEA section, these stamps were found in the margins of  Gabon in my feeder albums. 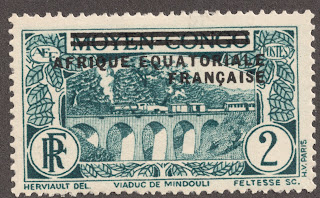 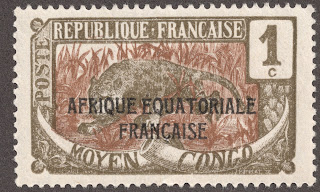 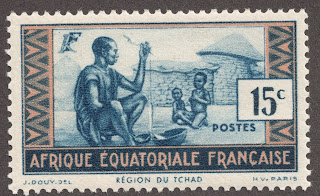 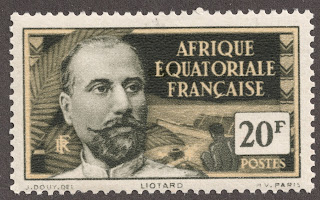 1937 20fr olive black & dull yellow
"Governor Victor Liotard"
The high end of the 1937-40 issue had a 20 Franc stamp illustrated above. How many do you think were used for postage as opposed to ending up in a stamp collection? ;-)

1940-41 1c brown & yellow "Logging on Loeme River" with carmine overprint
1940-41 3c blue & yellow with lower case black overprint?
In 1940, the 1937 issue was overprinted "Afrique Francaise Libre" or just simply "Libre", no doubt because of WWII. Scott recognizes 46 major descriptions, and the overprint on some stamps is found in either carmine or black. But I cannot find the black lower case overprint on the 3c blue & yellow illustrated above in Scott. Do any readers have a clue? ( The non-overprinted variety is @ 30 cents, while the "overprinted" variety catalogues @ $2, so a fake? ;-)

1940-41 30c gray & green "Pierre Savorgnan de Brazza" carmine overprint
1941 30c chalky black, indigo & buff with black overprint "Libre"
Here is a same denomination stamp that was produced in different colors, and each stamp comes in either carmine or black overprint! BTW, the 1940-41 overprinted issue is much more expensive than the 1937 issue, with several stamps in the $65 range. 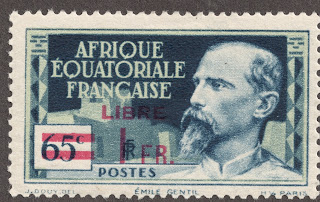 So, to summarize, French Equatorial Africa had two major issues between 1937-41 of 40 and 46 stamps respectively. No wonder I find a lot of FEA stamps in Big Blue collections. ;-)

Deep Blue
Deep Blue has 14 pages for French Equatorial Africa, and I managed to place stamps on 12 of those pages. Not bad. ;-) Deep Blue follows the Scott catalogue exactly. The puzzler was the black lowercase overprint I found on the 1940-41 3c blue & yellow, when Scott only has an uppercase carmine overprint variety listed. 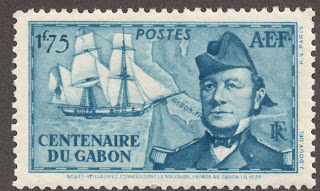 1938 1.75fr blue issued for Centenary of Gabon
Count Louis Edouard Bouet-Willaumez and His Ship "La Malouine"
Note "AEF" for "French Equatorial Africa"
Big Blue
The 69 BB has 63 spaces on three pages for regular, semi-postal, air post and postage due categories.
Coverage is 38%. BB does not provide any spaces for the 1936 overprinted Gabon and Middle Congo stamps. Twelve of them range from <$1-$1+. For the 40 stamp 1937-40 issue, BB provides 30 spaces. No coverage of the overprinted 47 stamp 1940-41 issue in BB, although Part II (1940-48) does have spaces if you happen to have that volume. 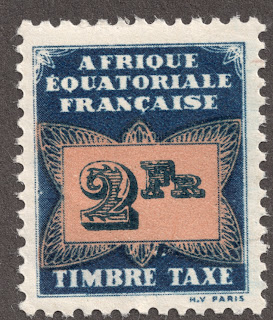 1937 postage due 2fr dark blue & buff
"Numeral of Value on Equatorial Butterfly"
Out of the Blue
What is interesting is to see the separate stamp issuing colonies come together finally as French Equatorial Africa. So what happened during WWII and afterwards? As a collector, one can tell from the "Libre" overprinted FEA stamps of 1940-41, that French Equatorial Africa was on the side of the Free French Forces. Gabon was briefly Vichy French from June-November, 1940.

The Federation was represented in  the French parliament from 1946-58. But after 1960, the territory became independent Chad, Central African Republic (former Oubangui-Chari), The Republic of the Congo (former French Congo), Gabon and Cameroon. (Cameroon was never technically integrated into the FEA.)

Map appears to be in the public domain.