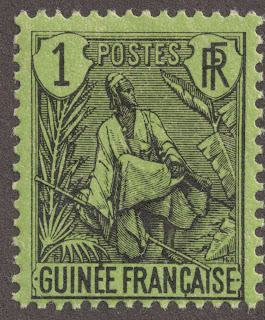 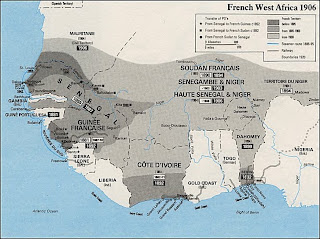 French West Africa 1906
French Guinea was a colonial possession of France until 1958, when it became independent as "Guinea".
The Capital is Conakry, a port on the Atlantic Ocean, and the population was 2,000,000 in 1941.

Modern day Guinea: Has the same borders as French Guinea
Into the Deep Blue
The generic "Navigation and Commerce" stamps for the French colonies was the first issue for French Guinea beginning in 1892. The Scott Classic Specialized catalogue has 212 descriptions for regular, semi-postal, air post, and postage due categories. Some are of generic "French Colonies" origin ("Navigation and Commerce"), some of common design type ("New York World's Fair" issue), some of common French West Africa type (1906-07 "General Faidherbé" issue, 1940 Air Post issue), and the rest unique to French Guinea (1904 Fulah Shepard issues, 1913-33 "Ford at Kitim" issues). Clearly, the stamps unique to French Guinea are, for me, the most interesting.

Of the 212 descriptions in Scott, 130 are valued at <$1-$1+, or 61%. So it should not be difficult to have a representative collection of French Guinea for not much outlay for the WW classic collector. 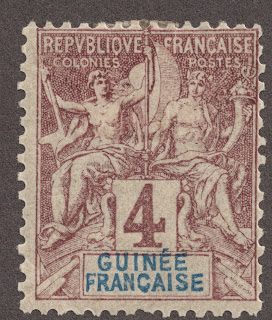 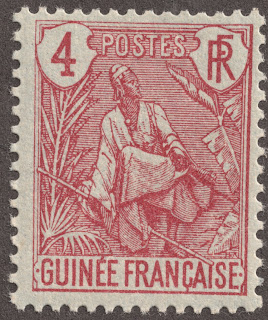 1904 4c carmine/blue "Fulah Shepard"
The Fulah people and language is found in Guinea, Senegambia, Cameroon and Sudan
The first indigenous stamp design had a "Fulah Shepard" on 15 stamps issued in 1904. There was also a "Fulah Woman" 1905 postage due design released. Five of the 1904 issue are $1+, with many in the $10-$30 range. 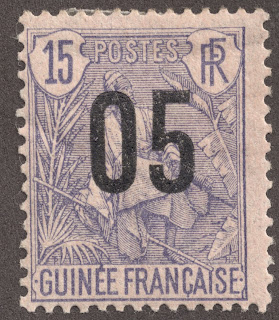 1912 5c on 15c violet/rose "Fulah Shepard"
As has occurred with other French Colonies issues, in 1912 stamps were surcharged with a "05" or "10". In this case, not only were seven "Navigation and Commerce" stamps used, but the Fulah issue contributed eight stamps. Be aware that these stamps also exist as minor numbers with more spacing between the numerals, and for much greater valuation. 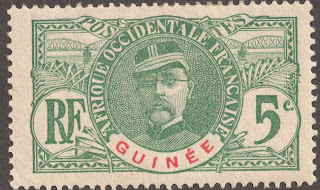 Although each Colony is imprinted, this issue was generic to French West Africa
In 1904, the French West Africa group of Colonies was formed, and here is an example of the first generic issue for the association (Afrique Occidental Française). This consisted of 15 stamps issued in 1906-07 with Faiderbé, Oil Palm, and Dr. Ballay designs. General Faidherbé was the Governor of Senegal from 1854-61, and 1863-65. 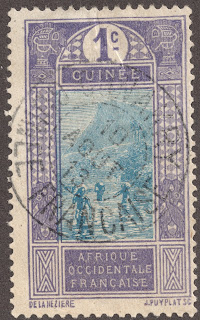 1913 1c violet & blue "Ford at Kitim"
SON with "Conakry", the Capital of French Guinea
The next issue was monstrous, consisting of 42 stamps, all with the "Ford at Kitim" central vignette design. As is typical for the colonial French stamps of the era, they had one color for the border, and the other for the scene. The French seemed to use every color of the rainbow for their stamps. ;-) This stamp was issued in waves from 1913-1933. This particular example illustrated above has a nice SON cancel of Conakry, the main Atlantic ocean port town and Capital. 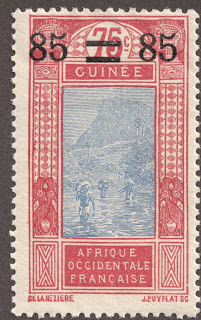 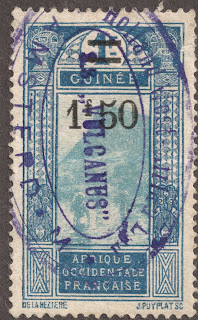 1927 1.50fr on 1fr deep blue & light blue "Ford at Kitim"
What's with the cancel?
The above example is the same surcharged issue, but that is not the reason I'm illustrating the stamp. I was curious about the postmark, and asked fellow collectors on Stamp Community Forum (http://www.stampcommunity.org/default.asp ) for information. The cancel is a Ship cancel for the "Vulcanus", from the Holland West Africa Line, that used to have shipping lanes in West Africa.

And here is a pic of the "Vulcanus". 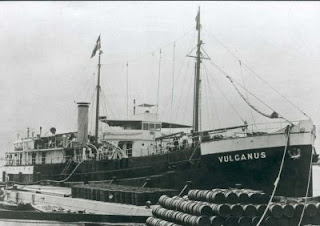 The Dutch ship "Vulcanus" launched in 1907
Fascinating! Thanks to SCF members who unraveled the postmark mystery. BTW, the SCF has a quite active WW classic stamp forum. 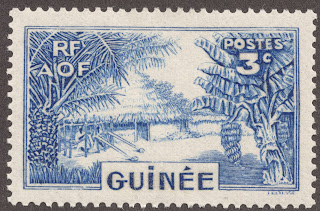 1938-40 3c ultramarine  "Guinea Village"
In 1938, a new four design 33 stamp issue was produced which has all the élan of French designed stamps.  Six of the stamps have the illustration above, all for CV 25 cents. I think this wonderful stamp puts the lie to the old saying " You get what you pay for". ;-) 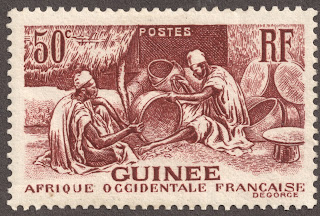 1938-40 50c red brown "Hausa Basket Workers"
The second design is on seven stamps, and all are available for <$1. The Hausa tribe today is 15 million strong, generally Islamic, and found in northern Nigeria. 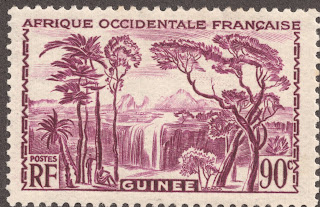 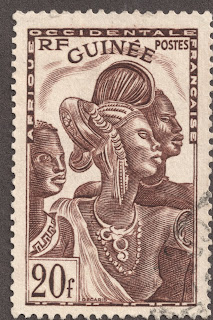 1938-40 20fr chocolate "Guinea Women"
The last design is on nine stamps, all with catalogue value of <$1-$1+, and features "Guinea Women", and a man too. Please enlarge this stamp and admire the image!

What a pleasure it is to be a world wide classic collector. !!

Deep Blue
Deep Blue has 15 pages for French Guinea, and I have stamps on 12 of them. 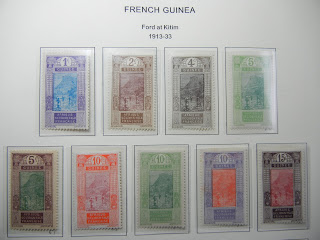 Deep Blue's page layout for the 1913-33 "Ford at Kitim" issue
Here is an example pic of the nice aesthetic layout for French Guinea as provided by Deep Blue. One of the concerns when I switched over to Deep Blue was would I have many empty pages? Actually not so. Of course, naturally, the pages are not as full as Big Blue. But the aesthetic layout, and the certainty that every stamp I acquire will have a space is rewarding and comforting. 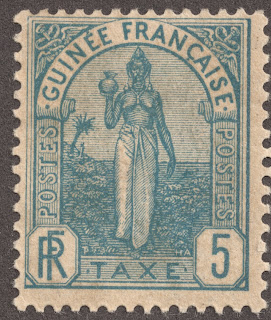 But three blank spaces among the 1906 set raises the costs considerably.

This yields two "Most expensive Stamps" for the ($35 threshold) list. Wow! 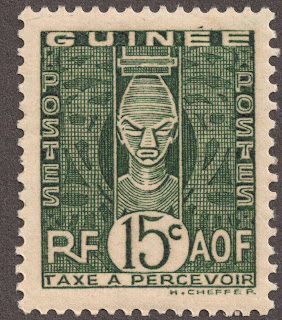 1938 postage due 15c green "Totem"
Out of the Blue
Just when I'm thinking I should perhaps limit myself to a sub-set of classic world-wide, I am faced with these fascinating and wonderfully designed stamps. How can one resist? :-)