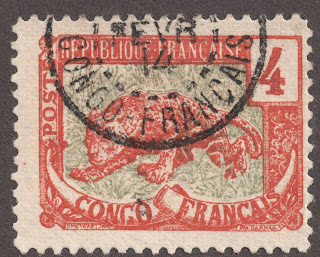 1900-04 French Congo 4c scarlet & gray blue "Leopard"
Quick History
The French Congo (Congo français) began as a protectorate for the Bateke people in 1880 at Brazzaville along the north side of the Congo River. Angola was on the south side of the Congo river. Concessions were subsequently given to French companies to develop the colony, but only some ivory, rubber and timber were extracted.

But, the Gabon-Congo area was renamed Middle Congo (Moyen-Congo) in 1903. Then in 1906, Gabon and the Middle Congo were separated, and the "French Congo" as such no longer existed. Subsequently, the colonies (Middle Congo, Gabon, ) were re-united in 1910 as "French Equatorial Africa", but had their own stamp production until 1933.

Chad and Ubangi continued as a dependency with the name "Ubangi-Chari-Chad", and the stamps of the Middle Congo were used there. 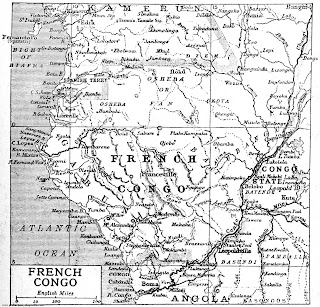 1906 Map of French Congo
Into the Deep Blue 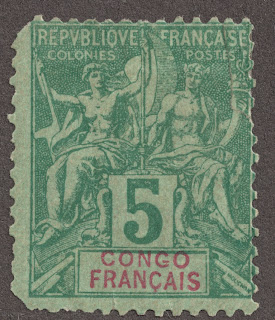 1892-1900 5c green/greenish "Navigation and Commerce"
Typical of most French colonies, there is a 17 stamp issue of the "Navigation and Commerce" design, with the faceplate stamped with "Congo Français".  Six of the stamps are <$6+, so a representative selection could be had without too much cost. Although the carmine color for the name of the colony is typical, look for the 4c claret in black and blue: worth $170+.  :-)

One could argue that a 17 stamp issue is a little much, but finding a socked on the nose cancel (Brazzaville) in my collection was, as the college kids say, "sweet". ;-)  (Illustrated elsewhere in the blog) 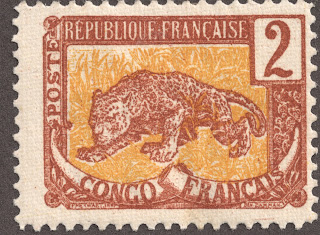 1900-04 2c brown & orange "Leopard"
A 15 stamp pictorial (Leopard, Bakalois Woman, Coconut Grove) bi-colored issue was produced for the French Congo in 1900-1904. Nice! Of interest, the stamps are watermarked with either a "Thistle branch", a "Rose branch" or a "Olive branch". Nine stamps are <$2+. The same design is found in the subsequent  1907-22 Middle Congo issue. 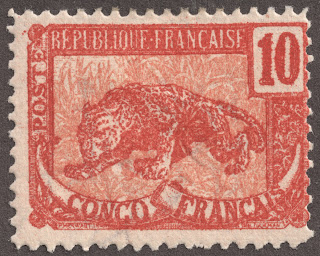 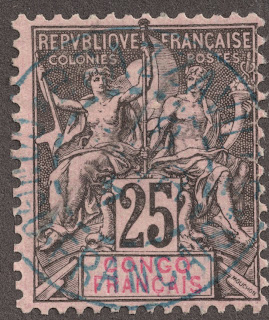 1892-1900 French Congo 25c black/rose "Navigation and Commerce"
Note the nice SON Brazzaville postmark
Big Blue
Big Blue '69, on one half page, has 18 spaces for the French Congo. Coverage is 35%.

More specifically, BB has seven spaces for the 1892 Navigation and Commerce issue. Filling those spaces economically (as there are two blank spaces), would range from $1+- $10. Very nice.

Comments
A) ( ) around a number indicates a suggested blank space choice. 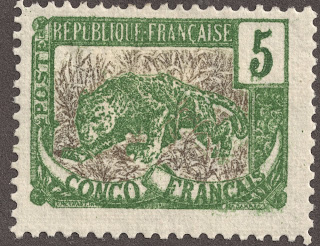 1900-04 5c green & gray green "Leopard"
Leopards were found throughout sub-Saharan Africa in both rain forests and deserts.
Out of the Blue
The "Leopard" pictorial is a refreshing contrast to the "Monarch" British Colonies stamps of the same era. And the lithe Leopard appears capable of leaping out of the stamp! ;-) 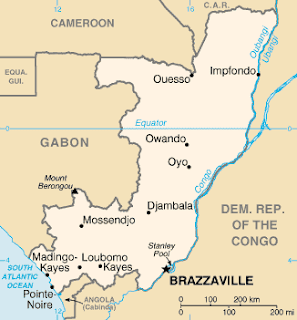