The Swiss coat of arms, radiant, rising over the Matterhorn, scattering clouds -- wow! -- it’s enough to make a rock-jock yodel. Scott #s 200-203 are among the finest, most patriotic designs ever issued by the Swiss Post.

And there are many varieties -- granite paper and ordinary, surface tinted paper and plain, smooth gum and grilled, with and without overprints, plus a host of plate flaws, color shades, and other anomalies. A collector could spend a lifetime admiring this one design and its many abnormalities.

This post narrows its focus to the overprints on these four stamps made for the League of Nations, Scott #s 2o32-2o34 and 2o31a-2o34a. A similar overprint made for the International Labor Organization is discussed in Post #25 of this series (forthcoming). 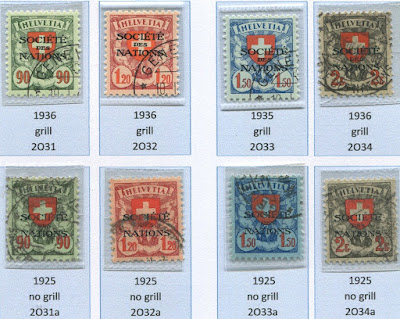 Both smooth and grilled gum varieties exist. Of course, you cannot see the grills on the above top row. But if you can magnify the scan sufficiently on your computer, you might be able to detect tiny squares on the stamps’ front side. Used grilled examples are rather more scarce than mint or CTOs. A brief discussion of grilled gum on SdN stamps can be found here.

Curiously, Scott Catalog editors decided in this instance to subordinate the stamps issued at an earlier date to those issued later, the opposite of their normal pattern. Hence, the 1925 issues --those without grilled gum -- get the “a” designation.

The bottom row of these #2o34s has three stamps (1, 4, and 5) with broken cervices on the Matterhorn, a plate flaw. The top row has none. Magnification of the scan is likely necessary to see them. They are visible without magnification on hand-held examples. The postal service sold the above mint block of ten, as well as the following full page, sometime after 1 February 1944. 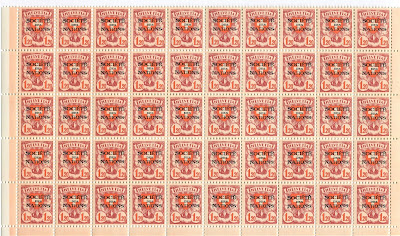 The #2o32 page was struck from a relatively new plate and has few if any anomalies. 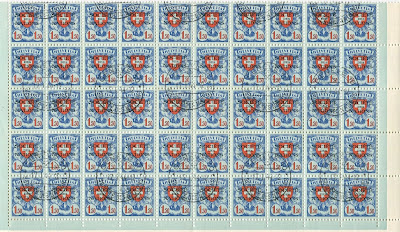 Later printings are understandably prone to faults. The above #2o33 page, undoubtedly a late printing, has multiple broken Matterhorn crevices, shading inconsistencies, and other defects. Either the tinted paper with a slick surface absorbed ink poorly, the deteriorating printing plate had many small breaks, or both.