The Versailles Treaty, following World War I, provided opportunity for people living in seven disputed territories contiguous to Germany to decide by plebiscite (referendum) whether or not to continue as a part of Germany or to join another nation. BB provides spaces for the stamps that publicized all seven plebiscites: Allenstein, Danzig, Marienwerder, Memel, Saar, Schleswig, and Upper Silesia.

The League of Nation supervised the voting and, because of that, these stamps could legitimately be included as a part the League of Nations album that is being serialized in this blog.  That has not been done, however, except for some of the Saar stamps.


Most plebiscite-promoting stamps are overprints; that’s true for some but not all of Marienwerder’s. The caption Commission Interaliée Marienwerder overprinted on German Empire stamps is French for “Inter-allied Commission Marienwerder,” the League’s agency for plebiscite oversight. Overprints exist in several fonts and colors, making Marienwerder an interesting technical specialization. 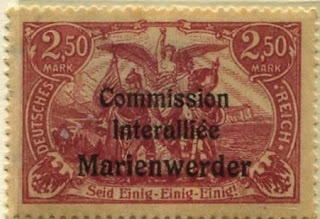 The Commission also issued two Marienwerder series with unique designs and no overprints, both printed in Milan. They feature a female allegory for the Commission standing on a ballot box inscribed populi voluntas, Latin for “the people wish” or “the will of the people.” She is surrounded by the flags of four of the five allied victors in WWI -- Italy, France, Japan, and Great Britain. Missing, of course, is the United States flag -- the ally that rejected membership in the League of Nations, a political humiliation for President Woodrow Wilson who had strongly promoted populi voluntas. 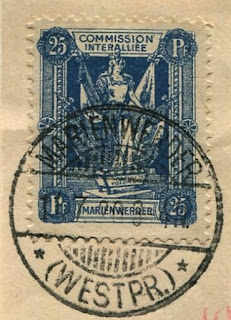 The two Milan issues differ in noticeable ways. The first, Scott #s 1-14, has Commission Interalliée at the top and Marienwerder at the bottom while the second, Scott #s 40-53, has Plébiscite at the top and Marienwerder Kwidzyn at the bottom, Kwidzyn being the Polish name for Marienwerder. The Commission wanted, I suppose, to appear unbiased, although “Kwidzyn” appears in a smaller font. The actual voting reflected strong pro-German sentiments. Both series became postally invalid on 14/9/1920 but, during the following week, they could be exchanged for German empire stamps. 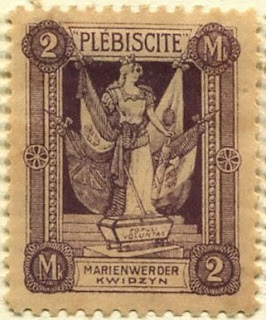 Marienwerder town cancellations provide an interesting historical specialization, there being some 64 of them, alphabetically from Altfelde to Troop. At the time, the popularity of CTOs resulted in many socked-on-the-nose local post office sets. See: https://www.stampsofgermany.com/germany-specialised-stamps-and-postal-history-for-sale/weimar-1919-1932/plebiscites/marienwerder.htm

Jim's Observations
After WW I, some territories, namely Alleinstein in East Prussia, and Marienwerder in West Prussia, because of a vocal German population, and the sympathies of the British Prime Minister Lloyd George, were allowed  to vote whether to join Poland or East Prussia (Germany).

The Plebiscite was scheduled for July 11, 1920. It was sponsored by Inter-Allied Commissions for the League of Nations. British and Italian contingents were on the ground, but civil administration was handled by the Germans.


Naturally, the plebiscite was promoted and publicized through the use of stamp issues. 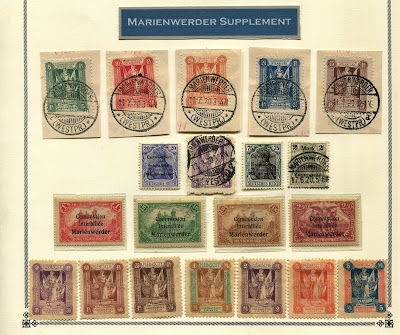