League of Nations Album
2. Pre- League of Nations Philately
1919-1920
WW I Peace Conferences
To be precise, it was not World War I that produced the philatelic outburst that fills BB albums but, rather, it was the war’s aftermath. The post-war Peace Congress changed the world and, with it, stamp collecting, forever.


The Congress’ five principal treaties -- signed at Versailles, St. Germain-en-Laye, Neuilly, Trianon, and Sevres -- all made new stamps necessary, but no stamps were issued for the Congress itself. Stamp production soon surged elsewhere, though. (1) Why? Because the Congress abolished Germany’s colonies, redrew national boundaries, authorized plebiscites and mandates, and established three international peace-preserving organizations -- The League of Nations, The International Labor Organization, and The World Court -- all of which required new stamps. Philately convulsed; stamp albums bloated.


Although it issued no stamps for the Congress, France did provide commemorative cancelations for two of the sessions. All French stamps circulating in 1919 can be found with Versailles and/or St. Germain “Congres de la Paix” cancels. They were struck from 7 May through 10 September, 1919. War-related Cinderellas often have such cancels too. Even stamps of other nations sometimes bear Versailles or St. Germain postmarks.

Many of these are “favor” cancels on unaddressed envelopes that must have been available for purchase long after the Congress concluded its work. They’re relatively inexpensive even today.  In addition, delegations participating in the Congress had diplomatic cachets. These are exceedingly scarce on official envelopes, but sometimes found on souvenir postcards. The United Nations displays the cachets in a pdf. (2) 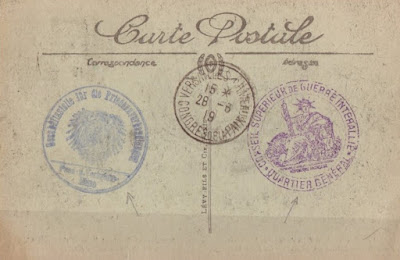 The French provided six different cancels for the Versailles session and four for St. Germain. Together with the diplomatic cachets, they represent the beginning of post-war philately. 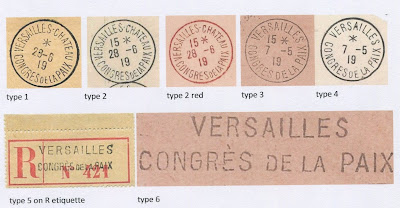 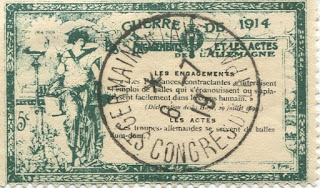 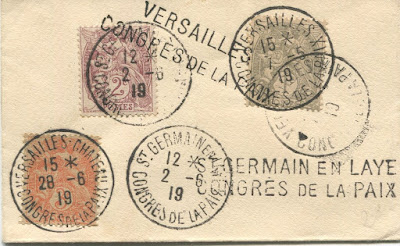 Small envelope with both Versailles and St. Germain cancels 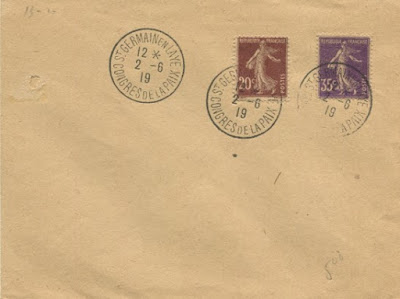 “Suddenly from outside comes the crash of guns thundering a salute. It announces to Paris that the second Treaty of Versailles has been signed…. There was a final hush. ‘La séance est levée,’ rasped Clemenceau. Not a word more or less. We kept our seats while the Germans were conducted like prisoners from the dock…. ‘Oui,’ says Clemenceau, ‘c’est une belle journée!’ There were tears in his bleary eyes.” From diary for 28 June 1919, Harold Nicolson. (3) 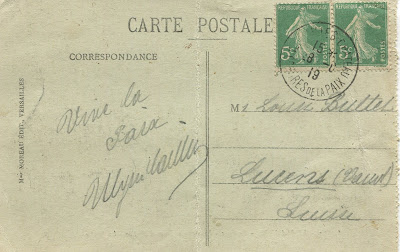 The sender of this commercial postcard, Versailles cancelled on the day the Treaty was signed, may have heard the thundering guns. “Vive la Paix!” -- the message of the day.

The following cover addressed to A(ntoine) Velleman came from a German organization that supported peace. Velleman and his associates invented the consecutive translation system used at the Peace Congress and, later, at the League of Nations’ many conferences. 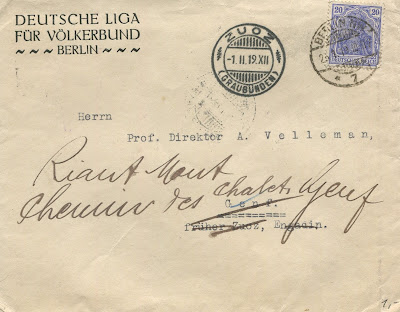 The cover probably arrived while Velleman was working on the plan for immediate translation as delegates were still speaking. Without it, communication at the Congress would have been slow and hopelessly snarled. He founded the Geneva Interpreters School. Several covers connected to Velleman will follow in subsequent posts of this series. This one belongs in the “Pre-League of Nations Philately” chapter.

Notes:
(1) See for example postal history of Hungary, Austria, Turkey, Samoa, German East Africa, Mariana Islands, Saar, Alexandretta, Palestine, Upper Silesia and many others. Peace Congress-generated stamps of these countries either are presented, or will be, in Bud’s Big Blue posts.