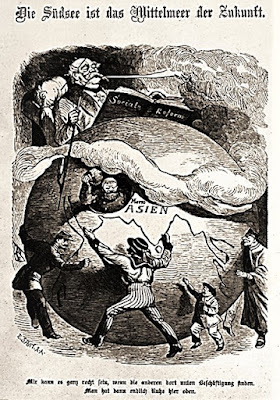 Germans were late entrants in the colonial land-grab race. While other European nations were claiming vast territories, Germany busied itself with German unification. Even in the 1880s Bismarck was engrossed with Europe and social reform, not Africa or the South Pacific. The above cartoon shows a contented Bismarck, his smoke blinding him to what’s happening south of the equator -- namely, representatives of other nations grabbing land. The caption reads “The South Seas are the Mediterranean of the Future.”

Procolonial interests eventually compelled the reluctant Bismarck to suit up and protect German shipping and trading. During 1884, the year the cartoon was published, Germany’s privately administered colonies, including New Guinea, hatched rapidly.  Annexation by the German Empire followed when private arrangements failed.

German stamps with numerals and eagles were overprinted for use while the private German New Guinea Company held authority. The yacht stamps appeared after the German Empire took over, the Company having fizzled in 1899.

Authentic cancels are costly. The Stephansort cancel (8 March 1902, below) was struck at a trading post for German investors in the Bismarck Archipelago. Like Bismarck himself, Stephansort no longer exists, but the Archipelago ironically still bears his name.

Some yacht stamps are said to be forgeries, their identifying feature being connected serifs on the word “Guinea.” Fake “G.R.I.” overprints are common on British Occupation issues, but BB has no spaces for these. So far as I know, none on these scans are fakes.