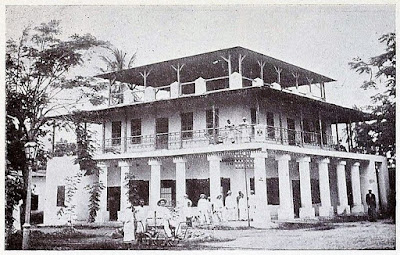 German colonists frequently used Tanga, a city in the northeast close to the Kenya border, as their port of entry. A contemporary observer proclaimed Tanga to be more beautiful and prosperous than Dar es Salaam, the capital city; this because of coffee, sisal and cotton exports to Europe.

No doubt, the Tanga cancel (23 May 1907, shown below) was struck in city’s bustling post office.

Notice in the above photo: 1) the line outside the post office, likely waiting mail carriers some of whom would be dispatched locally, some perhaps to the interior, 2) the characteristic German colonial architecture, 3) the signboard with the German eagle, 4) the telegraph pole, 5) the kerosene street lamp, and 6) the tram trundling along rails, powered by Africans but conveying a European who ogles the camera.

Colonists “devoured” any and all mail from home. One contemporary journaled “… for every white person in remote Africa, however monotonous or uniform his life may be, there is a recurring joyful moment when his pulse beats faster -- the unexpected appearance of a dust-covered mail carrier with a chest filled with mail from home -- even more so if the previous mail came long ago. Every little letter will be read with devotion, turned around, viewed upside down, then re-read. Every bit of newspaper, albeit months out of date, will be literally devoured and almost memorized.” The colonial stamps affixed to the replies now fill our BBs.

Census: 33 in BB spaces, 1 tip-in, 12 on supplement page including three Nyasaland Protectorate stamps with “N.F.” overprints, these intended for Nyasaland military use in GEA during WWI.

Jim's Observations
The German colony of German East Africa, opposite Zanzibar, and bordering on the Indian Ocean, was established as a protectorate by the German government on March 3, 1885. When the Sultan of Zanzibar objected, five warships were sent by Otto von Bismark to the area. The British and the Germans divided the mainland among  themselves, and the Sultan had to agree.
In 1890, the Heligoland-Zanzibar Treaty was instituted between Germany and the British. Germany gained the islands of Heligoland in the North Sea ( A British possession since 1814), while the British were allowed to build a railway through parts of East Africa to Lake Victoria. And Germany agreed not to interfere with the British sphere of influence with the Zanzibar sultanate.

Makes sense if one things of Africa as a Monopoly Board. ;-) 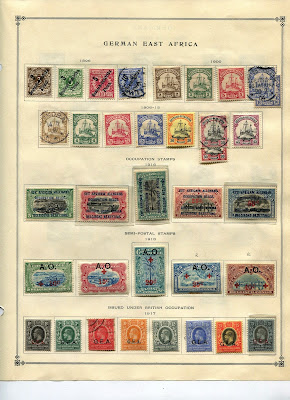 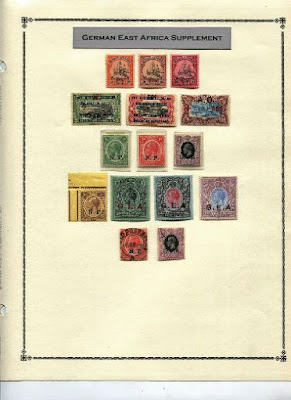