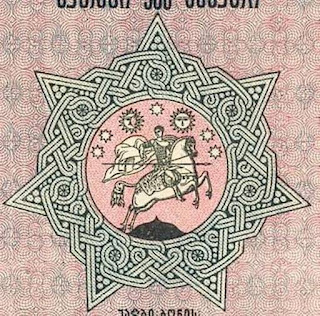 One cannot be entirely sure that Georgia’s spear-wielding, mountain-jumping rider is meant to be Saint George.  Why? There’s no dragon. The chivalrous patron appears on Georgia’s ancient arms always accompanied by the dying or dead dragon, an identifying attribute that signifies evil.

Stamps and currency came out with the dragonless design a few months after Georgia declared independence from Russia on 26 May 1918. Perhaps, though, the dragon is not entirely absent, but lurks hidden and, as yet, unslain on the other side of the mountain (i.e., evil Russia).

Such a dicey interpretation befits the turmoil that followed the 1917 Russian Revolution. Armenia, Azerbaijan and Georgia formed the Transcaucasian Federation in 1918, but it broke up almost immediately with the constituent parts declaring independence. Britain occupied Batum to protect access to oil, but withdrew in 1920. Turkey claimed some of the territory, but encountered obstinate resistance. Borders flip-flopped. In 1921, Russia invaded Georgia to form a soviet republic and, in 1923, established the Transcaucasian Socialist Soviet Republic by belting Georgia together with Armenia and Azerbaijan. Then matters settled down, at least philatelically, with Russian stamps being used from 1923 onward until Georgia’s independence in 1991.

Big Blue tracks these upheavals admirably. Georgia’s jumping rider, centered in the 1919 issues and on Queen Tamar’s shield in 1920, gets replaced by Soviet insignia in 1922-3. The story continues in BB’s sections for Batum, Armenia, Azerbaijan, and the Transcaucasian Federated Republic. Queen Tamar (aka Thamar), incidentally, reigned during Georgia’s medieval golden age.

A Kartvelian language, written Georgian (ქართული ენა) has a unique script that lends itself to magnificent calligraphy, which might be misconstrued on the 1919 stamps as elaborate arabesques. The border letters do have that quality, of course, but they also spell the country’s name. For those of us illiterate in Georgian, French is also provided. Why French? It was preferable to Russian, I suppose, and also an official language of the Universal Postal Union.

Jim's Observations
Georgia is located in the south Caucasus region of Eurasia. Georgians, an ethnic group, have their own language. But at the beginning of the 19th century, Georgia was annexed within the Russian Empire. Following the Russian Bolshevik Revolution of 1917, Georgia declared independence on May 26, 1918. A National Republic was formed, and Georgia issued stamps in 1919 and 1920. Georgia was under British protection from 1918-1920.

The Red Army attacked and occupied Georgia in February, 1921, and the Georgian government fled the country. A Moscow directed communist government was installed. 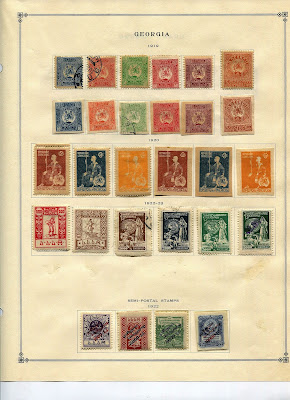 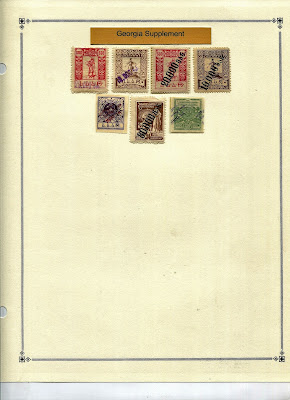