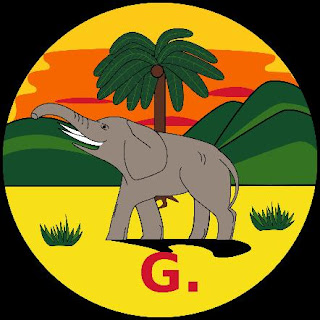 Some of Gambia’s stamps stir my curiosity -- especially the early embossed issues and the elephants.  The rest are standard British colonial designs.

Inkless embossed images had a promising start from the 1850s through the 1880s. A few British stamps were embossed as were the colonial stamps for Heligoland and Gambia. Austria, Portugal, Italy and Germany also embossed some early stamps. Then, before 1900, embossing largely disappeared except for the occasional odd-ball commemorative. Why? Perhaps the raised parts didn’t stick well to envelopes. Perhaps collectors preferred flat stamps for albums. Some Portuguese colonial stamps in my collection were embossed with vigor, cut clear through the paper.

A hunter spotted and shot Gambia’s last wild elephant in 1913. So, they’re regionally extinct, as are lions, giraffes, gazelles and rhinos. Nevertheless, beginning in 1922 and continuing until 1953, Gambia’s stamps have elephants, lots of them. Why did they portray British crowned heads peering at extinct animals?

The British badges for West African settlements, as of 1889 in Gambia’s case, offer a clue -- they feature an elephant and palm tree (see above). The red “G” denotes Gambia, while “GC”, on otherwise the same design, was used for Gold Coast, “SL” for Sierra Leone, “L” for Lagos, and so forth. Gambia’s philatelic pachyderms appear to have been inspired by the badge. But, I wonder, why do elephants survive on Gambia’s stamps while not on those of the other settlements?

Jim's Observations
The Gambia River on the west coast of Africa served as a portal for the slave trade; first by the Portuguese, then by the British. Three million slaves were exported during the three centuries that the transatlantic slave trade was operational.  The British, however, banned slave trade throughout its Empire in 1807. The military post of Bathurst (Banjul) was established at the mouth of the river by the British in 1816. Eventually, in 1888, Gambia became a separate colony, and the boundaries were set in agreement with the French Republic.
Initially, the British Crown Colony consisted of the colony ( Bathurst and surrounding area), while the rest of the territory up the Gambia River was a  protectorate. Stamps were issued in 1869.

As one will notice, they have an embossed head of the Queen. Definite Victorian eye candy. ! 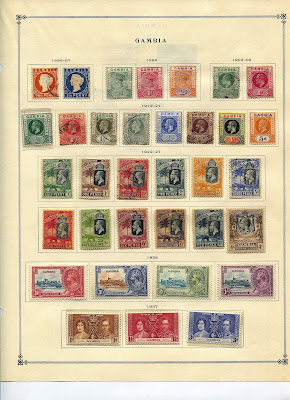 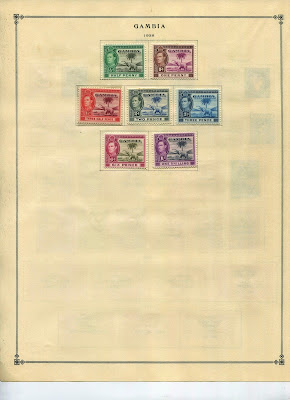 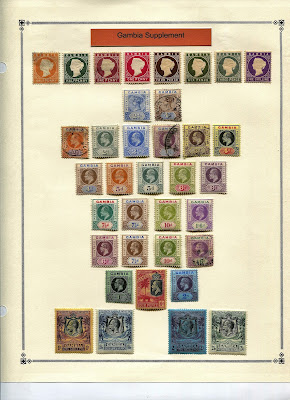 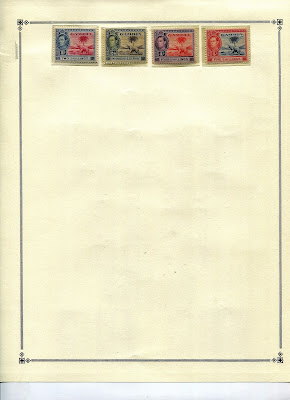