Bolivia - the 1925 Centenary of the Republic issue 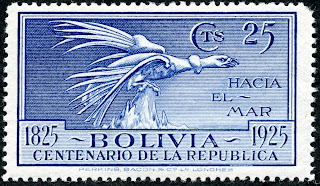 1925 Scott 155 25c ultramarine
"Condor Looking Toward the Sea"
Into the Deep Blue
This is the second blog post examining the classical era stamps of Bolivia.

We reviewed the earlier issues with the preceding post....

Now, the reader is in for a treat!

What does one get if one combines Bolivian themes with an Art Deco stamp design?

The 1925 "Centenary of the Republic" ten stamp engraved issue! 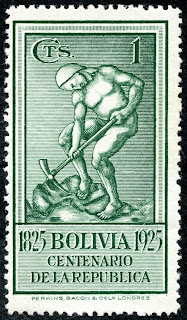 1925 Scott 150 1c dark green "Miner"
Art Deco has elements of cubism, and I think we can see that here with a very Bolivian topic, the "Miner"

Of interest, Scott has a note that the 1c and 2c values were not released for general use. Consequently, they are only valued as "unused". 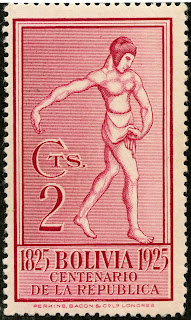 1925 Scott 151 2c rose "Sower"
Bolivia has the highest proportion of indigenous ethnicity - Quechuas and Aymaras - in Latin America. I'm glad to see this stamp acknowledges that, as the "Sower" resembles a man from the Inca Empire.

Contrast this image with the female flowing robes "Sower" of France. 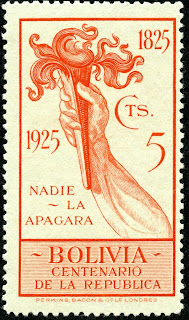 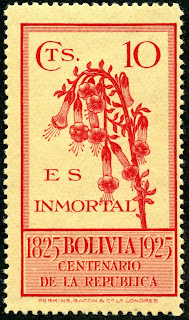 1925 Scott 153 10c carmine/yellow
National Flower (kantuta)
The kantuta (Cantua buxifolia) grows in the Andes Mountains, and was considered a sacred flower by the Incas. It is the national flower of Peru, and one of two national flowers of Bolivia. 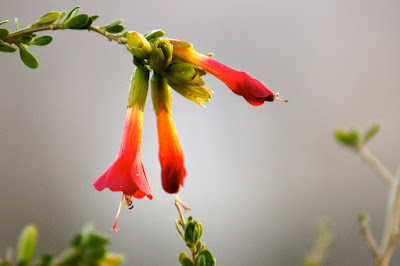 Kantuta tricolor variety- red,yellow, green: same colors as the Bolivian flag
The tubular flowers are small and delicate, and bloom in the spring. The evergreen shrub grows to 13 feet, and it will not survive with a temperature below 23 F (-5 C). 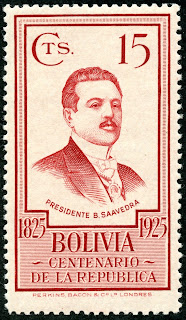 1925 Scott 154 15c red brown
"President Bautista Saavedra"
The least "art deco" imaged stamp is reserved for the Bolivian president of the time (1921-1925), Bautista Saavedra. Unfortunately, Bolivia has had its share of political turmoil with strong armed presidents, and Saavedra was one of them. He died in exile in Chile in 1939. 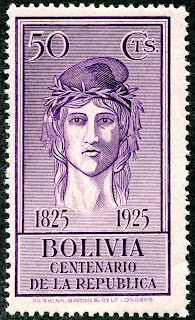 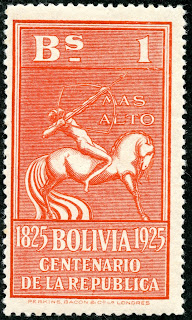 1925 Scott 157 1b red
"Archer on Horse"
This image is probably a heroic pictorial symbol, note the "mas alto" (much higher).

But there actually existed the Chiriguanos of eastern Bolivia, a fearsome warrior ethos tribe, that acquired horses from the Spanish, and fought with bow and arrow. 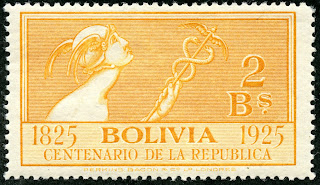 1925 Scott 158 2b orange "Mercury"
The patron god of messages/communication (among other things), Mercury of roman mythology (Hermes -Greek mythology ) is depicted as 'quick", as one would ideally like with postal mail. Note the caduceus. 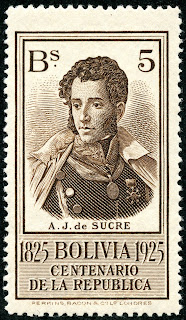 1926 Scott 159 5b black brown
"A. J. de Sucre"
Antonio Jose de Sucre y Alcala (1795-1830) was a leader of Venezuelan independence, the fourth President of Peru, and the first elected president of Bolivia. He was Simon Bolivar's chief lieutenant, and the capital of Bolivia, the city of Sucre, was named after him. 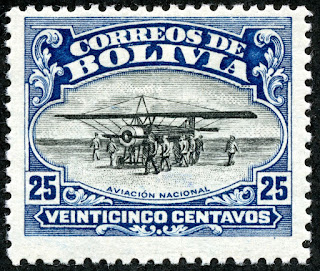 1924 Scott C3 25c dark blue & black
"Aviation School" (Scene one)
Bolivia has some quite attractive bi-color stamps. The first air post issue of seven stamps was released in December, 1924. This was to commemorate the establishment of the National Aviation School. 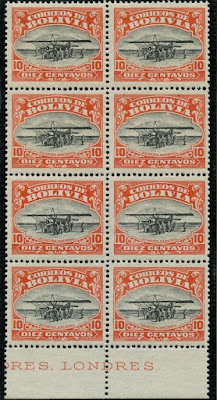 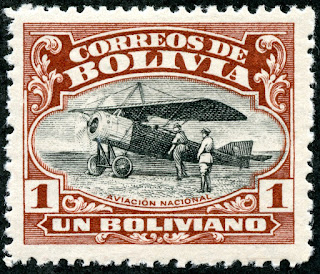 I couldn't find much about the history of the Aviation School, but German residents, supported by the Bolivian government, started airline operations (LAB -Lloyd Aereo Boliviano) on September 23, 1925. The airline was nationalized in 1941, having remained under heavy German influence since the beginning. 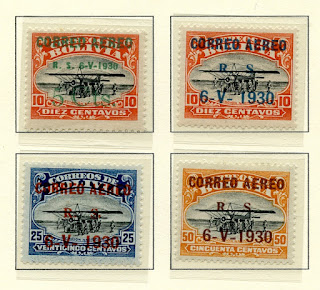 On May 6, 1930, Bolivia issued eight stamps (Scott C11-C18) for the flight of the airship between Europe to Brazil, and return via Lakehurst, New Jersey. The stamps used were from Nos. C1-C5, surcharged or overprinted in various colors. 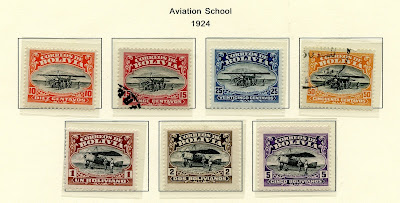 1924 Air Post Issue in Deep Blue
All the major Scott numbers for Bolivia have a space in Deep Blue (Steiner). 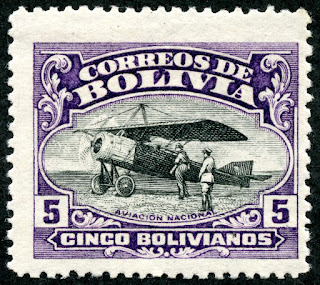 1924 Scott C7 5b dark violet & black
"Aviation School" (Scene two)
Out of the Blue
What a window into the national psyche stamps provide!

Note: Kantuta tricolor flower pic appears to be in the public domain.