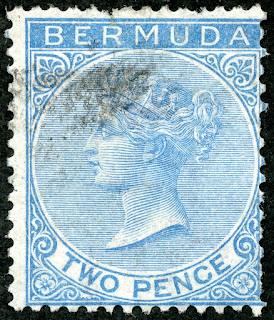 The handstamped/surcharged specimens of 1874-1875 (six stamps) range from CV $300+ to CV $19,000, and needless to say, are more the province of specialists/ well healed collectors - we ordinary WW collector types may need to take a pass. ;-) 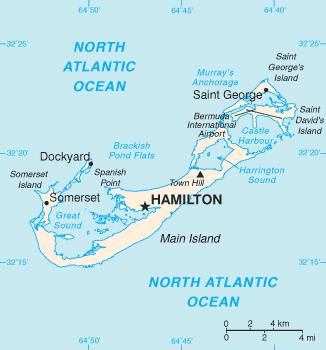 Bermuda
Basic historical information about Bermuda, as well as coverage of Big Blue is available at: 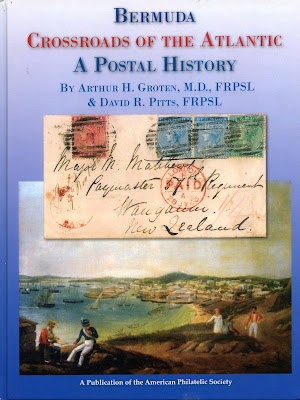 Bermuda: A Postal History
Groten & Pitts; 2017 Publication APS
If the reader would like to further pursue Bermudan philatelic history, especially the 17th to early 19th century postal history, may I suggest the above publication, recently available from APS? Fascinating. 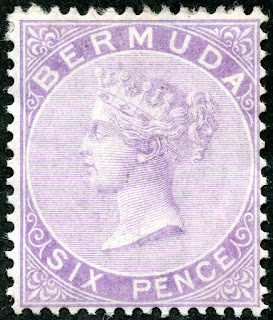 The typographic issue is from De La Rue in London, and has the same Victoria portrait on all stamps, accompanied by various frame designs. The watermark is "Crown and C C" (Wmk 1). The usual perforation is 14. There are Perf 14 X 12 1/2 stamps extant for the 3p, 6p, and 1sh, issued between 1882-1903 with a much higher CV.

If we could go back in time, what advice we we give for those that saved stamps?  Keep them on the cover! Values for stamps range from 5X to 30X more if they remain on cover for early issues! 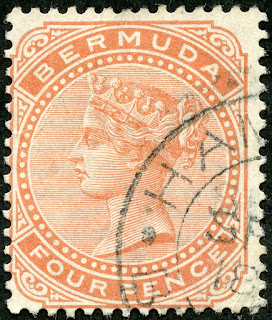 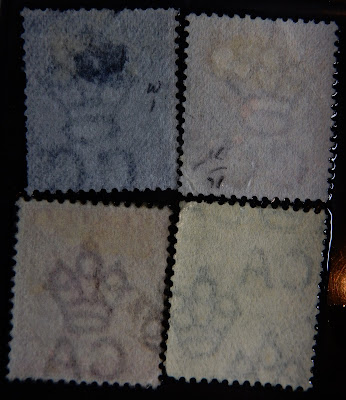 British Colonial and Crown Agent Watermarks
Top Row: Wmk 1 "Crown and C C"
Bottom Row, Left: Wmk 2 "Crown and C A"
Bottom Row, Right: Wmk 3 "Multiple Crown and C A"
For a refresher, here are the first three British Colonial watermarks referenced on this blog post for Bermuda. The Wmk 4 "Multiple Crown and Script C A" is not shown, but should cause little confusion. If you need to see an example of Wmk 4, refer to the Gibraltar post. 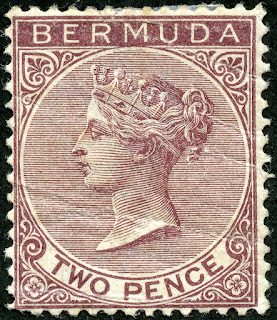 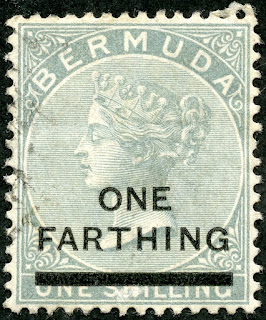 1901 Scott 26 1f on 1sh gray "Victoria'
Black Surcharge
On January 11, 1901, a one shilling stamp was released with a black "One Farthing" surcharge. The stamp design and watermark (Wmk 2) were similar to the 1893 one shilling release, but the color was changed from olive bister to gray. 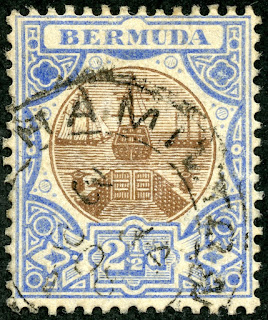 These were the first stamps of the British Empire that did not show the monarch's portrait (in this case, Edward VII). 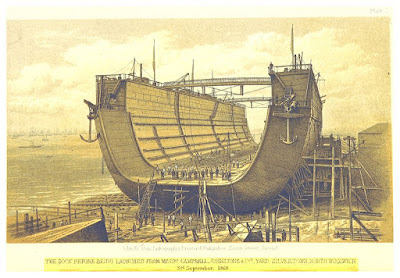 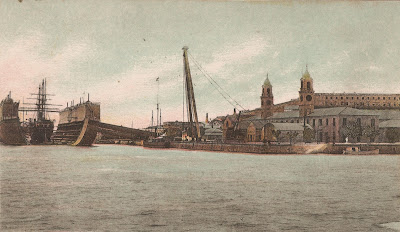 The Royal Navy Floating Drydock "Bermuda"
at the Royal Navy Dockyard, 1869
Of interest, the porous limestone of Bermuda prevented a conventional drydock, so a floating drydock was constructed in England and towed to Bermuda in 1869. 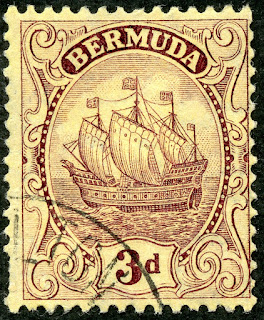 The "Caravel" design is considered to be from the Seal of the Colony.

A actual caravel type sailing ship, originally developed and used by the Portuguese, was popular for exploration voyages during the 15th and 16th centuries. Christopher Columbus used caravels.

I'm not sure exactly why the stamps of Bermuda depict  a "caravel", as Bermuda's history is more directly linked to "The Sea Venture", built in Aldeburg, England, as the first single timbered armed merchant ship, and launched in 1609. Her maiden voyage was supposed to be to Jamestown, Virginia.

The Sea-Venture, the flag ship of Virginia Company, was subsequently ship wrecked on Bermuda in 1609. The ship, part of the third supply mission to Jamestown Colony, Virginia, was driven onto the reefs of Discovery Bay in eastern Bermuda. All 150 people landed safely ashore. Thus began the fledgling settlement of Bermuda.

The Sea Venture ship wreck was thought to have been the inspiration for The Tempest, by Shakespeare. 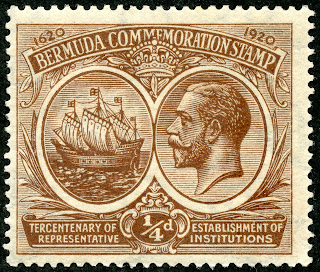 1920 Scott 55 1/4p brown, Wmk 3
"Seal of the Colony and King George V"
In 1920-21, a six stamp (Wmk 3) and a three stamps (Wmk 4) typographed issue was released for the "Tricentenary of Representative Establishment of Institutions", apparently originating in 1620.

The stamp is rather busybody, and, in fact, was designed by an amateur, the Governor of Bermuda, General Sir James Willcocks. 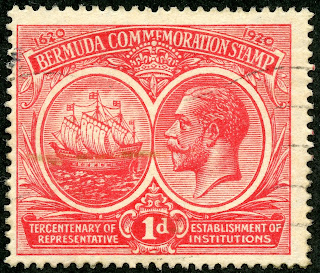 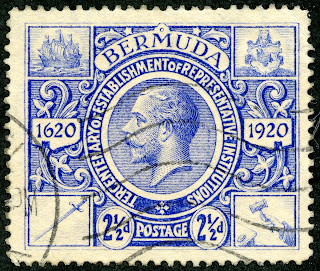 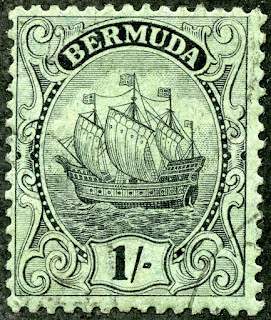 I must admit, this is really a lovely classical design - and engraved also! 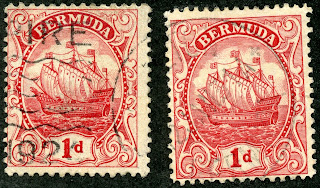 1p carmine TI & TIII Scroll
Both Scott and Stanley Gibbons mention the Type I and Type II stamps have a scroll at top left that is "very weak". The Type III scroll is redrawn, and the scroll is completed with strong line.

I could not find the area they were talking about for awhile, until I focused on the area of the scroll design over the "B" of BERMUDA. Let's take even a closer look....

1p carmine TI - TII- TIII
Scanned from Stanley Gibbons Catalogue
The second major sign for TI-TII-TIII is the shape of the "1 d" denomination, which varies by type.

As I do not have a Type II from my own collection to show, I am using the Stanley Gibbons illustration from their 1840-1970 catalogue.

1p carmine TI & TIII 1d
Looking at my own stamps, I believe the left stamp is a Type I (pointed serifs). Also the cancellation date on the stamp appears to be "1924" which precedes the other two types.

The right stamp has long square serifs (and shows the scroll has been redrawn) - Type III. 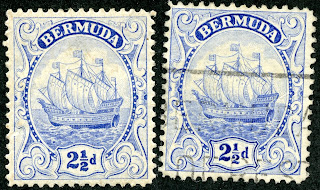 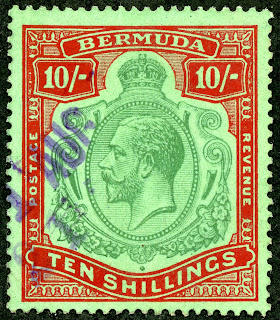 However, many of these large format stamps have revenue cancellations (as does my example). Apparently these stamps were often utilized as "Head Tax" for travelers leaving the country. 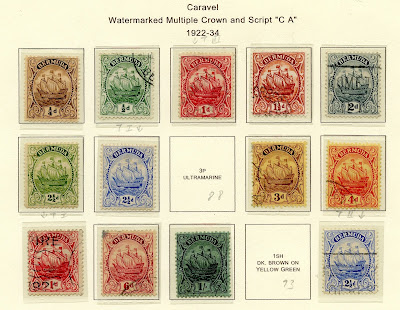 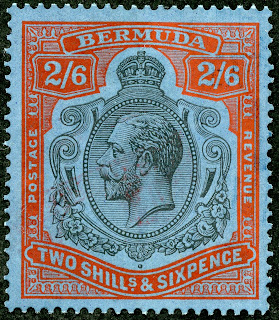 The next blog post will discuss/illustrate the pictorials of 1936-1951. More fun soon!

Note: The scan of types of the 1p carmine "Caravel" 1922-34 Wmk 4 issue is from the Stanley Gibbons 1840-1970 catalogue, and is used here for educational purposes. The map and Pic scans of the Drydock "Bermuda" and the Hamilton Panorama appear to be in the public domain.