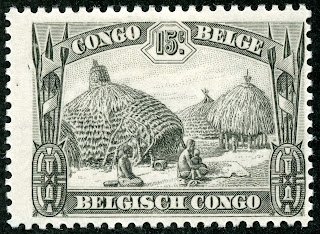 1932 Scott 140 15c gray "Kivu Kraal"
Into the Deep Blue
The engraved stamps of the Belgian Congo during the classical era are too nice for just one blog post - so here is a second one. !!

CV for the issue ranges from <$1-$1+ - obviously quite inexpensive.

There are sixteen pictorial designs.

I've picked out twelve of them to highlight here.

I recommend enlarging the scan image to really enjoy these stamps.

For a Belgian Congo historical overview (other than mine), take a look at Gerben's Stamp World History entry. 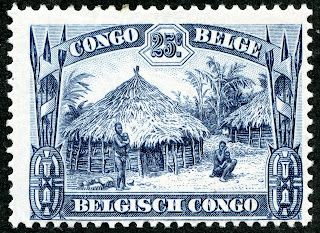 This stamp shows off the traditional African hut - a beehive dwelling made out of a wooden framework or mud, with thatched grass layers for roofing. 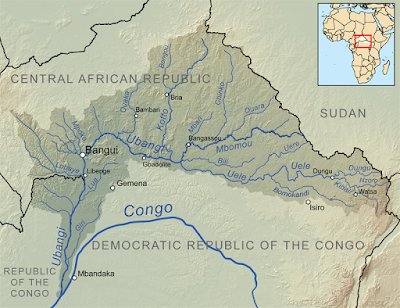 Uele River
The "Uele" natives here are defined by their location: namely the Uele River in the north-east section of the Belgian Congo. The Uele merges with the Mbomou, to form the Ubangi River, which in turn empties into the Congo. 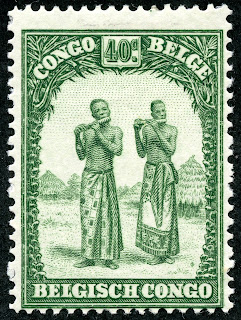 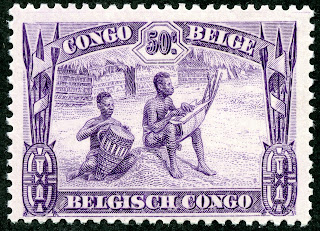 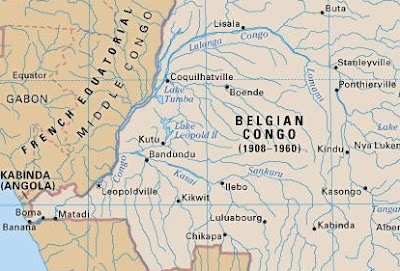 Belgian Congo 1908-1960
Note Lake Leopold
Lake Leopold (until 1972, now Lake Mai-Ndombe) is a large freshwater lake. It drains via the Fimi River into the Congo. Of course the lake was named for Leopold II, King of the Belgians. He was also known, less affectionately but more accurately, as the "Butcher of Congo". 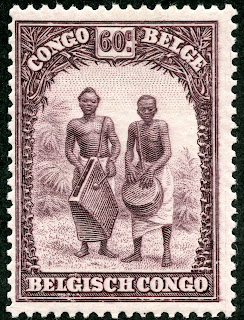 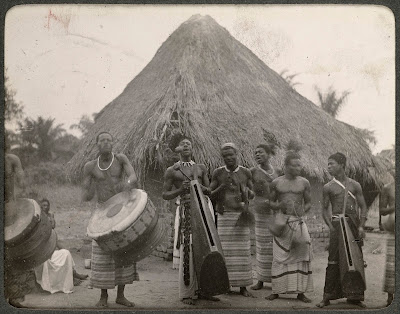 Native band at Lusambo, 1903, in the Congo Free State
The Batelelas (plural) or the Tetela people (singular) are an ethnic group between Lusambo and the Upper Congo River.. Today, they are engaged in fishing, farming, and cultivating cassava, banana, and kola nuts. 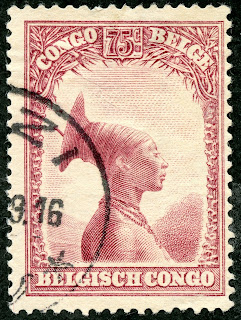 The Mangbetu live in the north-eastern Congo area, and are well known for their art and music (Mangbetu harp).

Mangbetu Homeland
The Mangbetu speak their own dialect, which is a Central Sudanic language. They became ascendant over their neighboring Bantu speaking tribes in the late 18th century, probably because of their knowledge of iron and copper forgery. 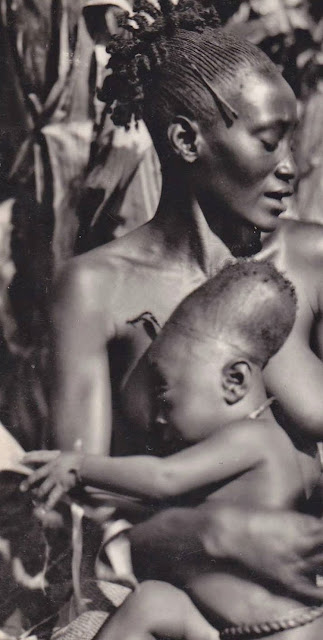 The Mangbetu (1930 photo)
The practice of developing elongated heads
For European explorers, the Mangbetu stood out because of their practice of elongating heads. Babies' heads were tightly wrapped with cloth or giraffe hide or bark (Lipombo). The elongation tradition diminished in the 1950s with increasing westernization. 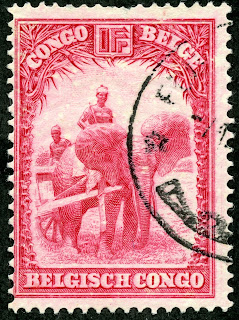 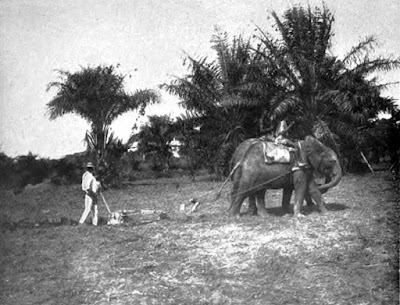 Api Elephant Domestication Center
Tamed wild-born Elephant plowing a field for farming
The Api Center functioned from 1925 to 1932. The Elephants were tsetse resistant, and were considered ten to twenty times as strong as oxen. 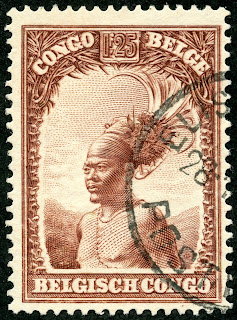 1931 Scott 148 1.25fr red brown
"Mangbetu Chief"
The Mangbetu, traditionally, had a belief system with strong elements of witchcraft and sorcery. When a person died, it was felt to have been done so "in the hands of" the father's family group. The father's group, then,  had to compensate the mother's group. 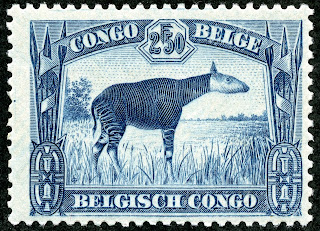 1937 Scott 151 2.50fr deep blue "Okapi"
One of the stranger appearing ungulate mammals, native to north-east Congo, is the Okapi. 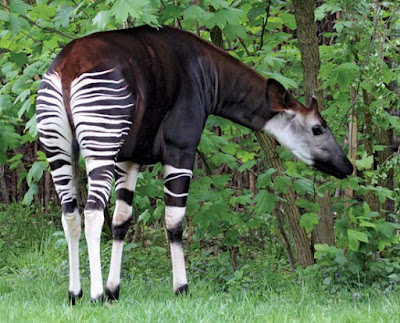 Okapi
Although, with the striping, it resembles a Zebra, actually it is in the Giraffe family. 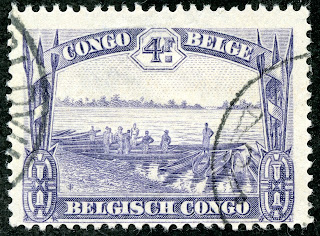 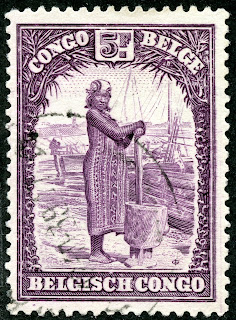 1932 Scott 154 5fr deep violet
"Woman preparing Cassava"
Cassava, from South America, was introduced into the Congo basin in 1558 by the Portuguese from Brazil. The cassava can be grown on poor soils, and is a reliable crop during droughts, when millet, banana, and yam production is decreased. Cassava is still a huge crop in West Africa, and it is mostly consumed domestically, with very little exported. 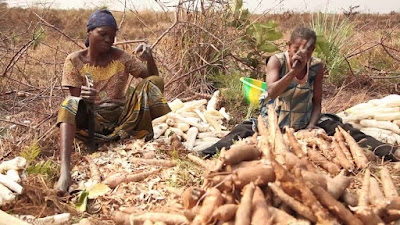 Women peeling Cassava
The edible starchy tuberous root of the cassava is peeled, and can be pounded into flour as the stamp illustrates. They are a major source of carbohydrates, but poor in protein or other nutrients. 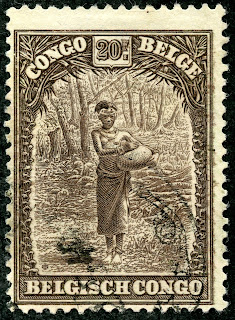 The portraits of natives on Belgian Congo stamps are some of the best representations done. Certainly, the British Commonwealth stamps of the era pale by comparison in this regard. 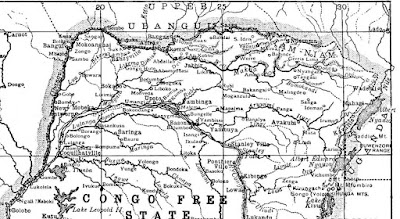 Congo Free State 1906
Irumu is on the eastern edge close to Lake Albert
Irumu is located on the Ituri river (downstream the river is named Arunmi), close to the eastern border of the Belgian Congo. 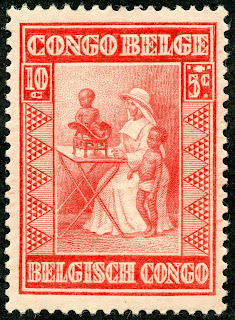 1930 Scott B12 10c + 5c vermilion
"Nurse Weighing Child"
In 1930, a nine stamp semi-postal issue was released to aid welfare work with the natives, especially the children. 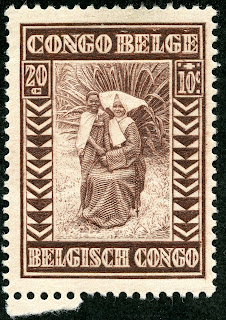 1930 Scott B13 20c + 10c deep brown
'Missionary & Child"
Conversion to Catholicism, public health campaigns, and education in the western tradition were and are considered good things by the Belgian authorities and public. 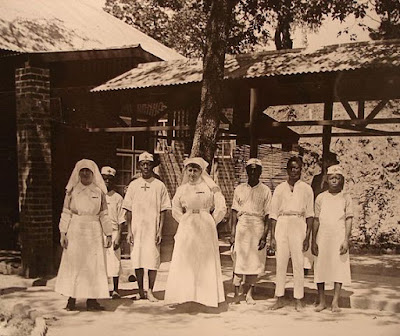 White Nurses of  Katanga, April, 1916
These "civilizing missions", of course, are also used as justification for colonialism. 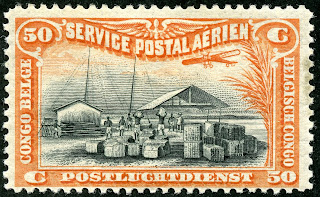 CV is <$1 for each stamp, quite inexpensive. 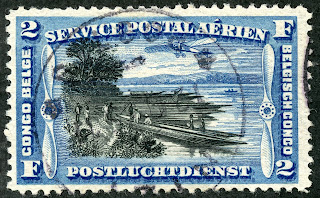 1920 Scott C3 2fr blue & black
"View of Congo River"
The issue was used for air mail operating between Kinshasa and Stanleyville, which began on April 1, 1920. 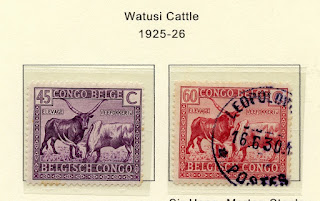 1925-26 "Watusi Cattle" Issue in Deep Blue
The contents of Deep Blue (Steiner) for the classic era Belgian Congo was discussed in the Part I blog post.

Watusi cattle, named for the Tutsi tribes of Rwanda and Burundi, have horns that can measure eight feet from tip to tip, and have been domesticated in Africa for 6000 years.

They are not necessarily raised for meat, but are milked and bled to make a yogurt high protein drink. 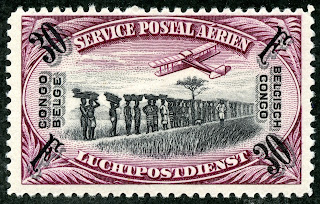 1930 Scott C6 30fr brown violet & black
"Porters on Safari"
Out of the Blue
Although the sordid history of colonial oppression loomed large for the Belgian Congo, stamp collectors are left with a lovely legacy. Go figure.