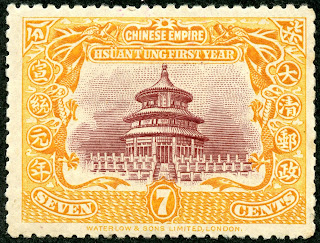 I can't think of any other country where it is so difficult to obtain material (even inexpensive material), and dealers almost always have little stock, as it goes out the door as soon as it comes in.

I did join the China Stamp Society, and they do hold auctions for their members. But there are no bargains at their auctions because one is competing against other enthusiastic China collectors.

So, even though I have a high interest in obtaining classical China, I've not come very far. A happy problem for us WW collectors is there is always other countries to collect, often with abundant material available and bargains to be had. So I circle back to China only occasionally, get frustrated with lack of buying opportunities, and move on again to another county.

Be that as it may, I thought I would do a broad (but limited in depth) review of the classical stamps of China. The review will give short shrift to the early (and expensive) issues, as I simply do not have material. But there is still much to talk about.

I need to mention that I have already published several posts on the 1913-1923 issues "Junk" and "Reaper" stamps. See.. 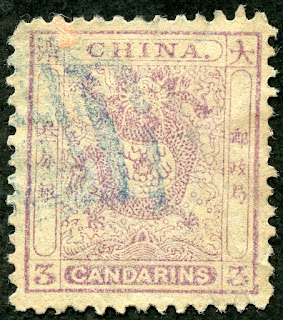 The stamp values were in silver candarin.

The stamps were actually printed by the Customs Statistical Department in Shanghai.

Both the Large Dragons (Nine major numbers) and the Small Dragons (six major numbers) were printed on individual copper dies (cliches), so each of these dies can be identified by specialists. There are 76 known dies for the Large Dragons, 40 known dies for the Small Dragons. Catalogue values for these Dragon stamps range from $60 to $1500 (Most range in the $hundreds). Needless to say, this is the playground of the rich and famous.

My Small Dragon stamp above (3c lilac) appears a bit faded. The China Stamp Society catalog states: "The printing ink is water soluble and can be washed off. Small Dragon stamps must never be soaked in water to remove paper or hinges"

On February 20, 1897, the national postal service (Imperial Chinese Post) took over from the Customs post. While awaiting the new silver dollar currency stamps to be shipped from Japan (See below), the remaining supplies of Large and Small Dragons, the Dowager Commemoratives, and even an unissued 3c red revenue stamp were overprinted/surcharged in silver dollar values for use as postage. This occurred between January and May, 1897, creating some 61 Major Scott numbers. The CV ranges in price from ~$20 to $75,000 (Most are in the $30+ to $hundreds). Again a playground for the specialist. 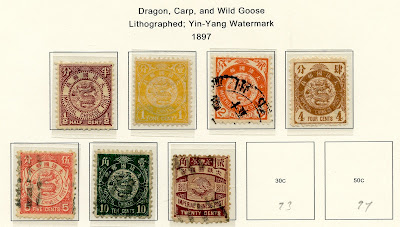 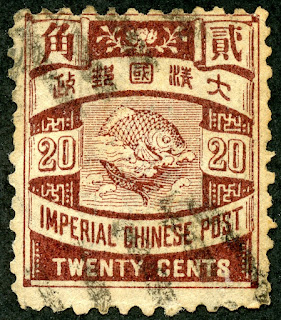 The "Carp", a beloved fish for eating, is shown on this 20c maroon. This issue was watermarked (See below). 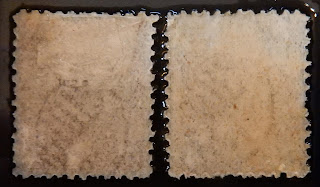 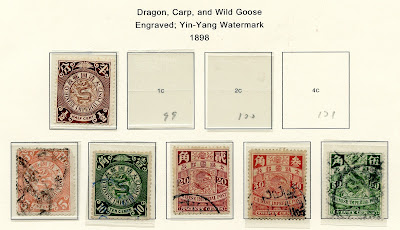 The watermark ("Yin-Yang" is rather difficult to detect, as the the paper is thick. 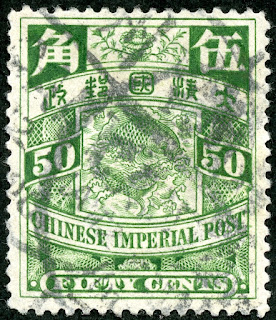 1898 Scott 106 50c light green "Carp"
Wmk 103 (Yin-Yang Symbol)
A close-up of the 50c green. The China Stamp Society catalog states that many shades can be detected, although Scott does not list any. 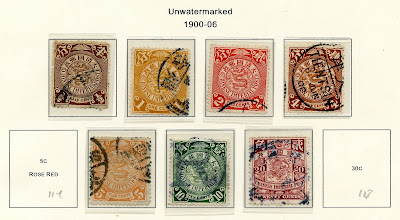 1900? -06 Scott 110-117 "Dragon, Carp, Wild Goose" Issue
Engraved, Unwmk
"Chinese Imperial Post"
In 1902, the watermarked paper that was sent to London ran out, so the stamps (from London) were printed on unwatermarked paper. Scott is unclear when these stamps were in use, but the China Stamp Society catalog states from 1902-1911 (last year of the Ching Dynasty). 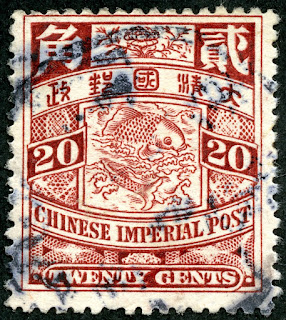 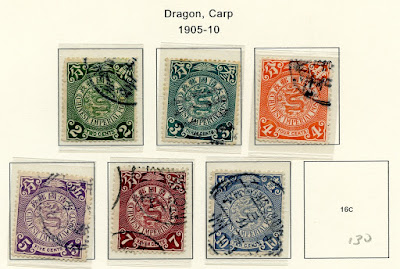 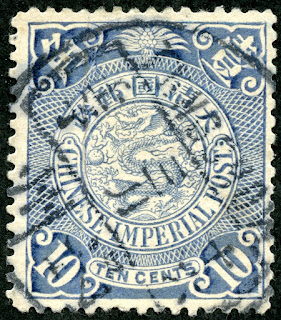 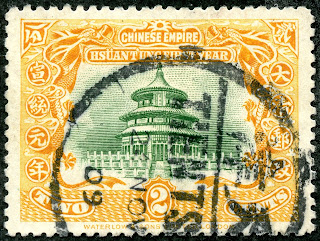 After the 1912 revolution, Emperor Hsuan Tung lived in the Forbidden City for a few years, then in Tientsin under Japanese protection. In 1934, he became the "puppet" emperor (Kang Teh) of Manchukuo. He eventually was allowed to return to China where he lived out his (now uneventful) life. The movie, "The Last Emperor" is about him. 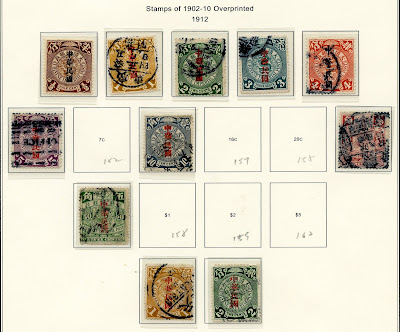 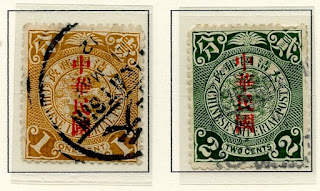 Note: Scott 161 & 162 (bottom row above) were actually printed by the Commercial Press, Shanghai. The characters differ in that the top character is shifted a bit to the right, and the bottom character has small "legs". 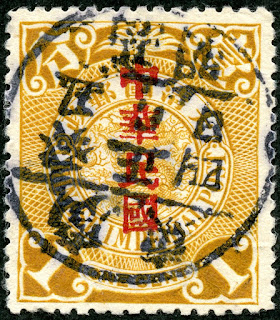 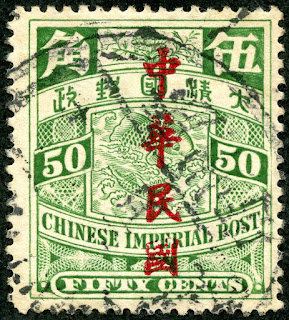 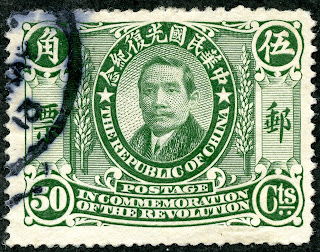 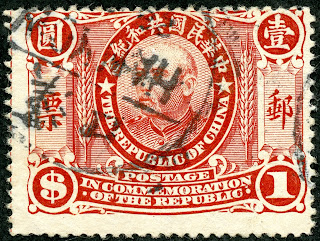 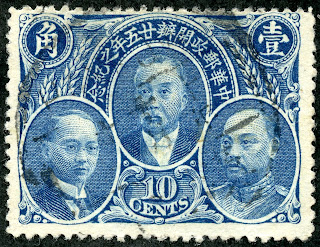 1921 Scott 246 10c blue
"Yeh Kung-cho, Hsu Shi-chang and Chin Yun-peng"
National Post Office, 25th anniversary
March 20, 1921 was the 25th anniversary of the establishment of the Chinese Post Office. A three stamp set was released. The center portrait is President Hsu Shi-chang;  Chin Yun-peng, on the right, is Prime Minister, and on the left is Yeh Kung-cho , Minister of Communication. 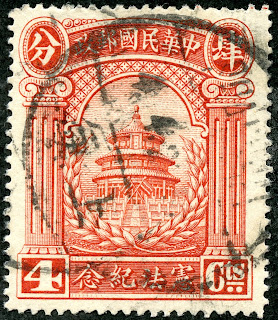 1923 Scott 272 4c red
"Temple of Heaven, Peking"
For the adoption of the Constitution, October, 1923, a four stamps engraved set was released. The "Temple of Heaven" is depicted, as that is the place where the constitution was officially adopted. 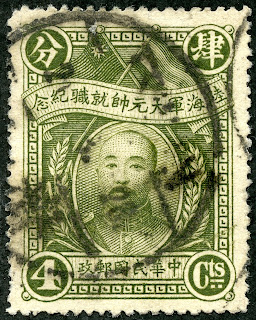 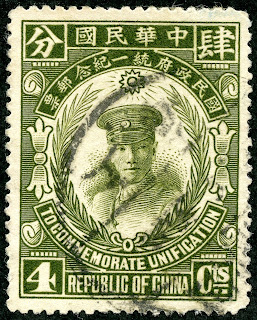 Of course, Chaiag Kai-shek was very much intertwined with the history of China (and Taiwan) for the next 45 years. 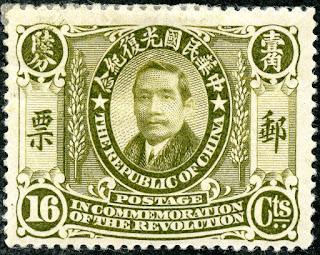 1912 Scott 184 16c olive green "Dr. Sun Yat-sen"
"Honoring the leader of the Revolution"
Out of the Blue
There is much much more that could be said about the stamp issues of classical China, but this will have to do for now. I hope you enjoyed this brief survey.