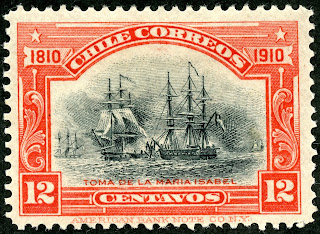 1910 Scott 88 12c vermilion
"Capturing the "Maria Isabel""
Center in Black
Into the Deep Blue
This is the third "closer look" post for the stamps of classical era Chile.

This third emission frankly serves as an excuse for me to show off the 1910 issue commemorating the centenary of independence for Chile. This gorgeous bi-color fifteen stamp issue (Scott 83-97) was produced by the American Bank Note Company of New York, 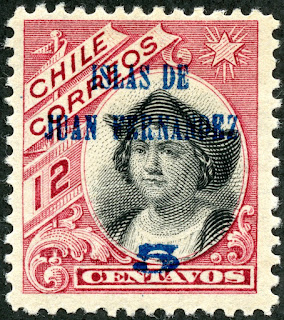 Here, the Scott 73 12c lake & black "Columbus" was surcharged in blue. Although the surcharge states "Islas de Juan Fernandez", the stamps were authorized to be used throughout Chile. 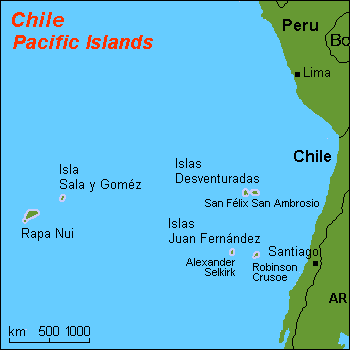 Islas Juan Fernandez off the coast of Chile
By the way, the islands are now a protected area and park. Including most of "Robinson Crusoe Island", the archipelago is a habitat for fur seals and the firecrown hummingbirds. 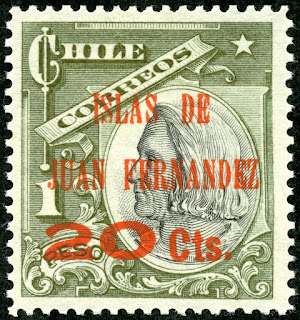 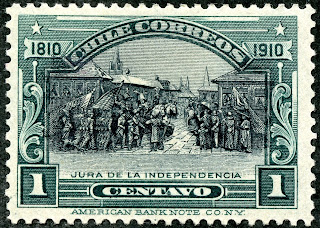 1910 Scott 83 1c dark green
"Oath of Independence"
It would be interesting, and a nice side- collection, to gather all the stamps that were bi-colored between 1901-1910 and issued by many countries. Most were engraved, as is this issue from Chile. 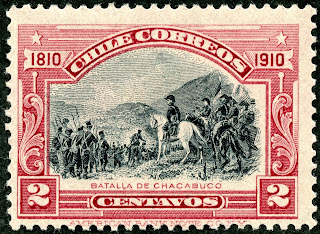 It is clear that the supply/demand curve for this gorgeous issue is on the side of the collector even today.

The history of the Chilean War of Independence is fairly complicated to understand. The 1910 "Independence Centenary Issue" illustrated here will help with the highlights. 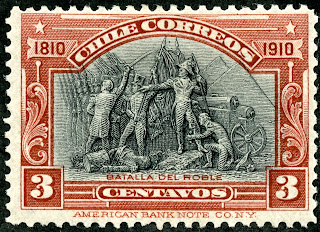 1910 Scott 85 3c red brown
"Battle of Roble"
As one likely would suspect for the era, a number of the stamps in the issue illustrate the decisive battles. 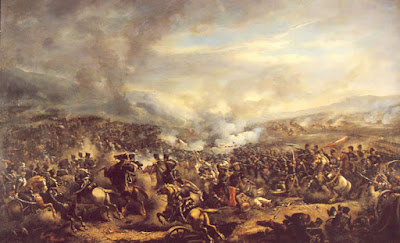 "Combate de El Roble de Octobre 1813"
Pintura de Manuel Tapia  Portus (1835-1915)
This painting illustrates the first battle that was won by the patriots against the royalists.

This is where Colonel Bernardo O'Higgins gave his famous speech....

"Lads! To me! Live with honour, or die with glory! The one who is brave is the one who follows me!"

...and became a hero. He subsequently was named a commander of the patriot forces. 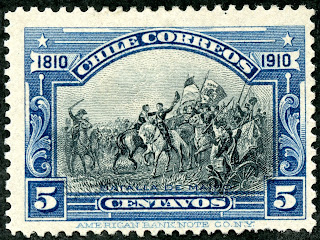 The Argentine general Jose de San Martin won a the decisive "Battle of Maipu" near Santiago on April 5, 1818. This assured the independence of Chile from Spanish domination. 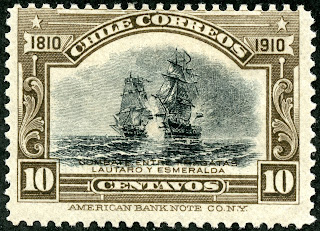 1910 Scott 87 10c gray brown
"Naval Engagement of "Lautaro" and "Esmeralda""
On April 26-27, 1818, the "Lautoro" engaged the Spanish frigate "Esmeralda". The boarding party, including Captain O'Brien, lost their lives, but did succeed in breaking the Spanish blockade of Valparaiso. 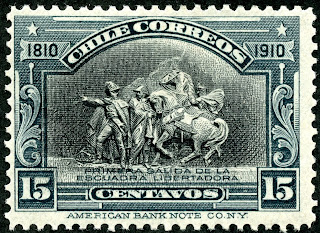 1910 Scott 89 15c slate
"First Sortie of Liberating Forces"
The tableau (from the O'Higgins monument) shows General O'Higgins pointing out the vessels of the liberating naval squadron setting out in search of the Royalist navy. 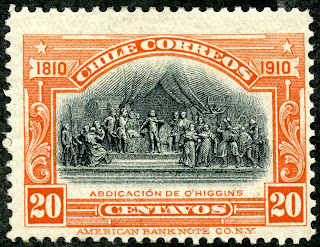 1910 Scott 90 20c red orange
"Abdication of O'Higgins"
In 1823, O'Higgins abdicated, and a new junta was formed. He planned to return to Ireland, his ancestral home. But General Freyre had him arrested and he was put in prison. But the people, who had not forgot his heroism, demanded his release. 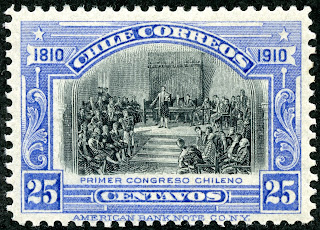 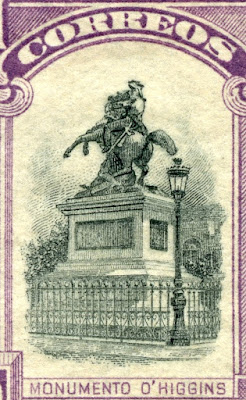 1910 Scott 92 30c violet -Closeup
"Monument to O'Higgins"
Bernardo O'Higgins, son of a former Governor of Chile, Ambrosio O'Higgins, was a major key in several battles, and he was eventually was named supreme director of an elective government. But after his release from prison in 1823 (see script for the 20c), he lived in Lima until his death in 1842. 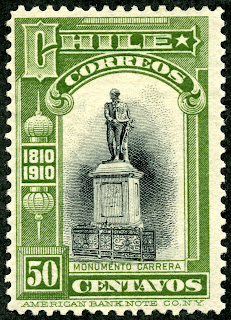 1910 Scott 93 50c olive green
"Monument to Jose M. Carrera"
Complicated history.  Carrera was initially General-in-Chief of the patriot army in 1811. He then decreed himself president, but his fortunes changed and he was imprisoned along with his two army officer brothers. (O'Higgins was then commander of the army.)  Carrera then became a refugee in the United States, but then returned to Chile where he learned his two brothers had been executed by order of San Martin. He then carried on guerilla warfare with a small group of 500 men against the Generals of the Independents for three years. He and his officers were captured and shot at Mendoza September 4, 1821. 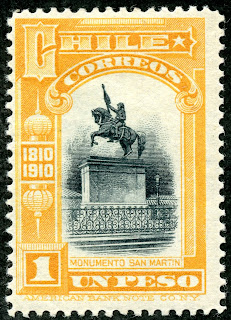 1910 Scott 94 1p yellow orange
"Monument to San Martin"
First Argentina, then Chile and Peru: San Martin did more than anyone to rid South America of Spanish Rule. In July, 1821, he entered Lima and proclaimed the independence of Peru. 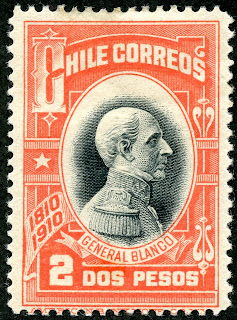 1910 Scott 95 2p red
"Gen. Manuel Blanco Encalada"
The General deserted the Spanish forces and joined the Revolutionary forces, serving with distinction. He was rear-admiral in 1819, and major general of the infantry in 1820. He became president of the republic after 1826. 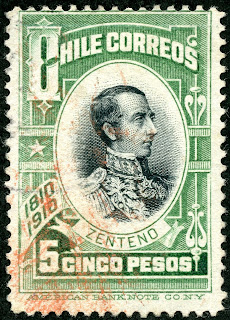 1910 Scott 96 5p yellow green
"Gen. Jose Ignacio Zenteno"
Zenteno was San Martin's secretary at Mendoza. He was then governor of Valparaiso in 1821. 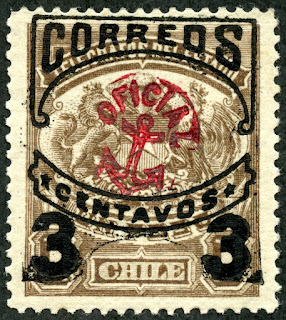 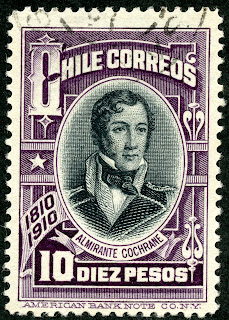 1910 Scott 97 10p dark violet
"Adm. Lord Thomas Cochrane"
Center in Black
Out of the Blue
The stamps are lovely, but the history is complicated. It appears it was not in the best interests to one's health to want to be a leader during these turbulent times. ;-)

Note: Painting image ("Combate de El Roble de Octobre 1813"), and map are sourced from the internet, and appear to be in the public domain. They are used here for educational purposes.