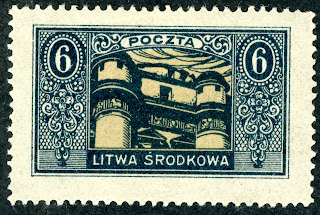 1921 Scott 40 6m slate & buff
"Poczobut Astronomical Observatory"
Into the Deep Blue
Clearly, one of the more obscure stamp issuing entities for WW collectors is Central Lithuania, which existed on the stamp scene between 1920 and 1922

One can learn more about the history by visiting....... 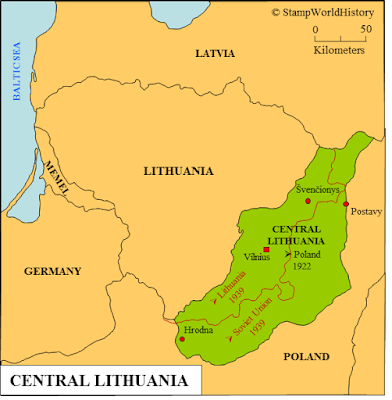 Central Lithuania
From Gerben van Gelder's Stamp World History
As one can see from Gerben's map, Central Lithuania was absorbed into Poland in 1922, but was split between Lithuania and the Soviet Union (Poland) in 1939.

And one can learn more by taking a look at the stamps... 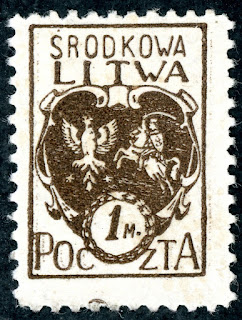 CV is <$1, with used slightly higher in value.

I should mention that this issue (and many issues of Central Lithuania) can be found with color and paper shades.

I should also mention that most of the Central Lithuania stamp issues exist both perf and imperf. 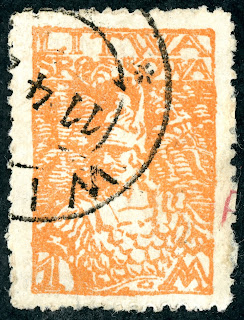 The designs are rather eye catching. The "Warrior" stamp (above) and the "Lithuanian Girl" ( see original blog post) are some of my favorites. 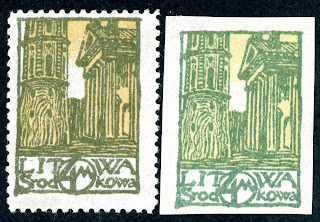 The stamps for this issue can be found in various shades. And remember, most issues are both perforated and imperforated. Scott does not separate out the imperfs and they have same Scott numbers as the perforated examples.

A word to the wise: since Central Lithuania's stamps are mostly lithographed, they provide fertile grounds for forgeries.

Pay attention to perfs, as the forgeries often have different perfs than the genuines. 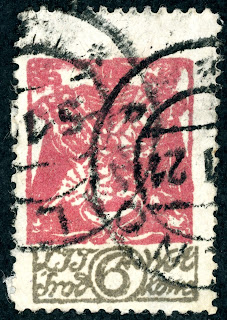 1920 Scott 27 6m rose & gray
"Rector's Insignia"
This is not a very attractive cancelled stamp, but I would rather have a real genuine cancelled stamp than a "philatelic used souvenir" (CTO and the like). But I suppose this too could be a "souvenir". 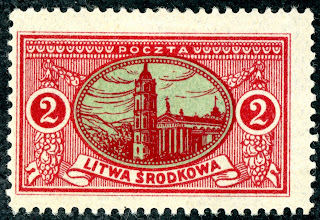 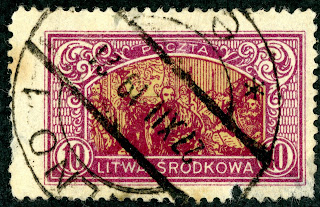 1921 Scott 41 10m red violet & buff, Perf 14
"Union of Lithuania and Poland"
The postmark date here is December 27, 1921, just before the election to determine Central Lithuania's fate (January, 8, 1922). Actually, with the 27,000 strong Polish occupation army in place, the Lithuanians in the territory refused to vote (considering it a sham), and naturally the election went for Poland. Lithuania refused to acknowledge (accept) the results of the election, and there was considerable tension between the two countries between WW I and WW II. 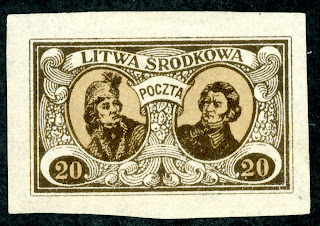 1921 Scott 42 20m black brown & buff
"Tadeusz Kosciuszko and Adam Mickiewicz"
I should mention that this issue can be found forged. The forgeries have Perf 11 1/2, while the genuines are Perf 14 or Imperf.

There is another 1921-22 six stamp six design issue (Scott 53-58) celebrating the opening of the National Parliament and the entry of General Zeligowski into Vilnius. CV is $3+ to $6 with used higher. Alas, I don't have any of these stamps. 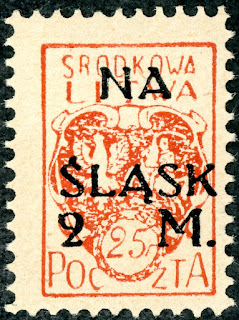 1921 Scott B1 25f + 2m red (Black Surcharge)
On Scott Nos 1-6
The 1921 six stamp semi-postal issue consists of regular issue Scott 1-6 surcharged in black or red. The surcharge reads "For Silesia, 2 marks". The stamps were intended to provide funds (in favor of Poland) for the Polish-German plebiscite of Upper Silesia. This time the Germans won.

CV is $1+ with used somewhat higher. 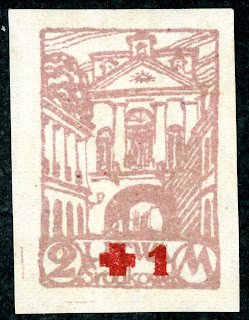 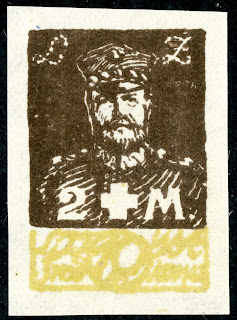 For more on General Zeligowski, see this. 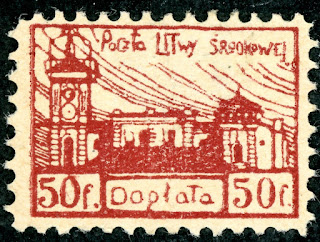 1920-21 Scott J1 50f red violet, Perf 11 1/2
"University, Vilnius
Varro Tyler (Focus on Forgeries) has a page on this stamp: the 1920-21 50 fennigi postage due stamp. He states that the forgery, created by a photolithographic process, is impossible to distinguish from the crude original lithographc stamp except for some loss of detail.

However, the genuine is printed on white wove paper, Perf 11 1/2 or Imperf, and has multiple shades: here red violet or lilac red. 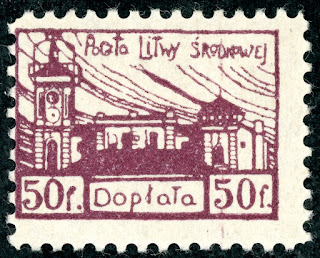 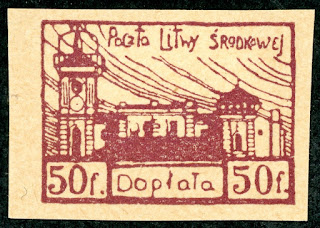 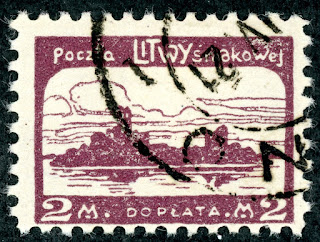 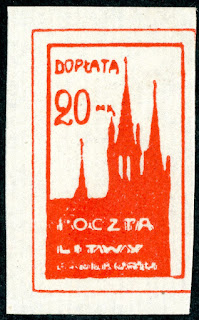 I guess one could say the stamp is so crude, it is almost modern in design. ;-) 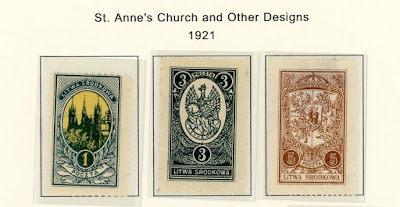 1921 Issue in part  (Scott 35-37)
Imperforate
In Deep Blue (Steiner), there are six pages for the 1920-22 stamps of Central Lithuania. All of the Scott major numbers have a space. I have a quadrilled page for the additional shades found for Scott 1-6. 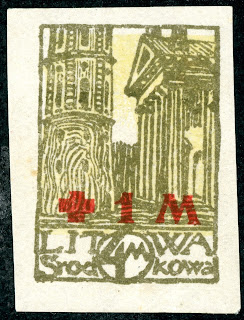 1921 Scott B14 4m + 1m gray green & buff
Scott 26 Surcharged, Imperf
Out of the Blue
Long forgotten by most except for Polish-Lithuanian history buffs and WW stamp collectors, I would think an interesting collection could be formed if one wishes to sub-specialize. The CVs are modest indeed.

Note: I used Gerben van Gelder's map of Central Lithuania for this blog post. I had general permission from him to use his maps, and as his StampWorldHistory web site is not presently active, I have included it here.