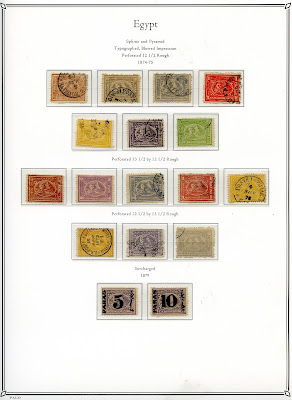 Palo Egypt 1874 - 1879 Page
"Sphinx and Pyramid"
Into the Deep Blue
As WW collectors, considering the expense of housing large collections, we mostly live "downstairs" - with our Steiner pages, our stockbooks, our Big Blues and our Minkus albums.

But how do the "upstairs" folks,- the specialists, the one or two country collectors live?

They may be able to indulge in new Scott Specialty albums , or the Lighthouse album system from Germany.

And if one is interested in album coverage for any country in the world (literally, any country/stamp listed in the Scott catalogue), there is Palo, an American company headquartered in Illinois. 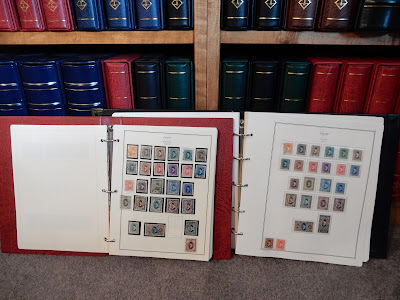 Steiner (red binder) & Palo (black binder)
Egypt 1927-37 "King Fuad"
Well, as WW collectors, we should stand up and take notice when albums are offered for any and all countries in the world!

Why hasn't that happened, for the most part, with Palo?

One reason - for the WW collector that would like a nicer album for specific countries, there are often used Scott Specialty albums available, which can be had -essentially free-for the underlying CV % cost of the stamps in them.

And the reality is the premium grade Palo is an "upstairs" album: It is rather expensive (You can check the specifics for various countries at their website). 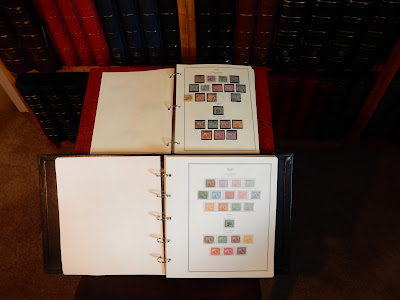 From their FAQ page...


I'm looking for a worldwide album. Do you have one?
No. Worldwide albums are hard to find because it is extremely difficult to collect worldwide nowadays. A worldwide collector would need to spend over $80,000 per year just to keep up with new stamps. Most collectors specialize and concentrate on individual areas or countries.
Comment:
Many WW collectors do set a date collecting limit for that reason, or have other methods (collecting used stamps, stamp exchanges etc) which actually limits the cost to a much more reasonable figure.
But it is true: if you are a WW collector, and bought a lot of their premium Palo pages, it will cost you a pretty penny. !! 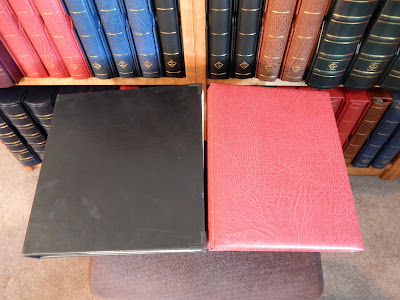 Palo (black binder) & Steiner (red binder)
Note the larger size of Palo
Well. Palo might not be a solution to house all stamps and all countries, but they might be an intriguing possibility for a favorite subset of countries! 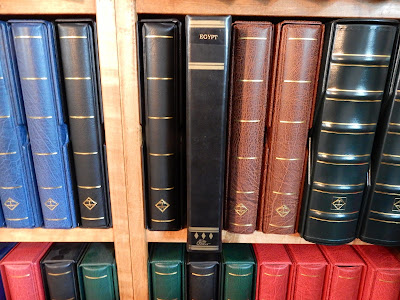 A Palo Egypt Album surrounded by Vario F & Vario G binders
that are housing Steiner pages (Deep Blue 1840-1940).
As luck would have it, I picked up an Egypt Palo album with a very nice collection inside at our local Stamp Club Show bourse.

I thought it might be instructive to compare the "Upstairs" Palo with the "Downstairs" Steiner.

Are the quality differences enough to justify a Palo album purchase for some (favorite) countries? 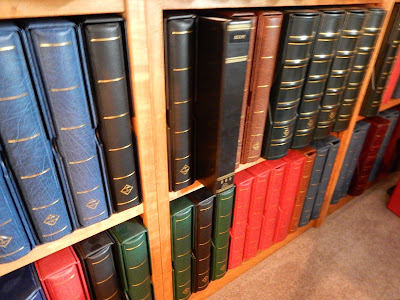 My, How Big you are!
As one can tell, the size of Palo is much larger than the usual 11" X 8.5" pages that I have for Steiner. In fact, I will need to find a new place for the Palo, as is clear. 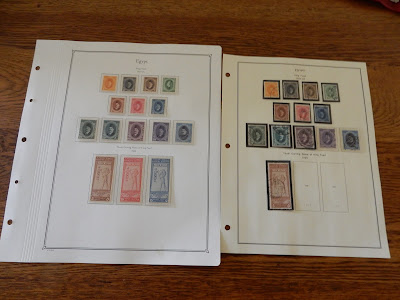 Comparison of Palo and Steiner page and layout
Egypt 1923-24 "King Fuad"
Some critics of Steiner say they cannot get past the "schoolboy" size pages and binders they are usually used for them.

Clearly, the Palo offers a much more spacious appearance. 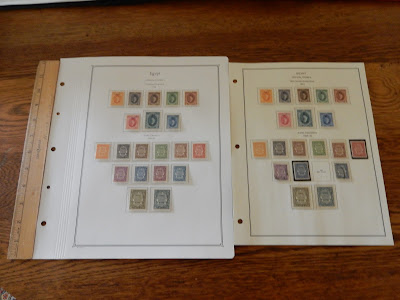 Pictures do not do it justice, as the Palo presents MUCH larger than the Steiner pages. 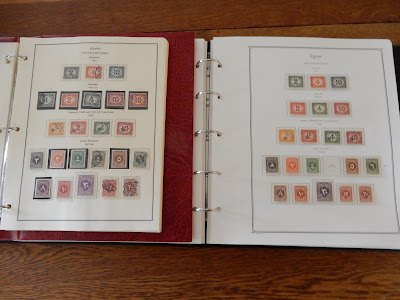 If you have been paying attention to the side by side presentation of Steiner & Palo, you may have noticed something.

That is no coincidence that the layout is the same.

Steiner has licensed their pages and layout to Palo for their use.

(I do not know if today all the Palo pages are derived, in part, from Steiner page layout. They might (and probably) have other sources now.) 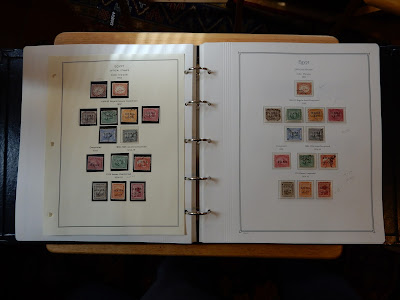 Steiner & Palo
Egypt Official 1893 - 1915
Here you see - on the left- a Steiner Page, which is surrounded by the blank Palo page underneath.

Note the five ring binder system. This is unique to Palo, which means you probably will be using their binders. Note, there is an option to have real leather for the binder.

However, a standard (American) 3-ring system does fit (3) holes of the Palo, so, if one could find a large enough 3-ring binder, that would work to house the pages. 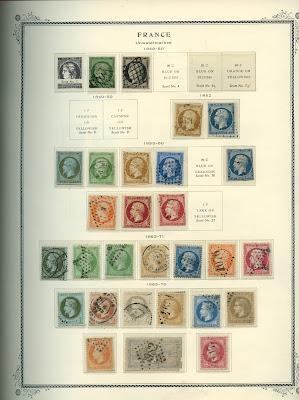 Scott Specialty Album
France 1849-1870
Clearly, a rival for anyone contemplating buying Palo - which follows the present day Scott catalogue in presentation, as does the Steiner, - are the Scott Specialty albums for various countries.

The Scott Country Specialty album does have the Scott number listed in the stamp space. The Palo does not.

The Scott Specialty albums are much better known and "accepted": They are generally considered the "gold standard", albeit a bit tarnished as we will see in the next several paragraphs.

However, most Scott Specialty album layouts are based on older Scott catalogues. They neither follow exactly the present day catalogue in presentation, nor are their color descriptions for the stamps always the same as today's catalogue either.

Palo (and Steiner) actually out-Scotts Scott in terms of ease of use with the present day Scott catalogue.

The other (significant) problem with Scott Specialty pages for the WW collector?

Premium Palo and Steiner, on the other hand, have coverage of all the stamps and countries in the present day Scott catalogue. (The "economy" Palo option, unfortunately, offers a much shorter list of country pages available.) 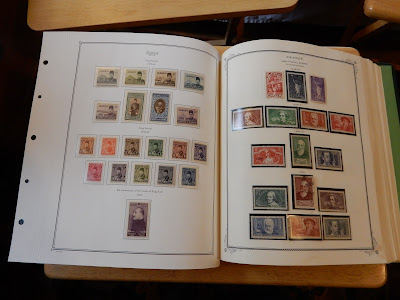 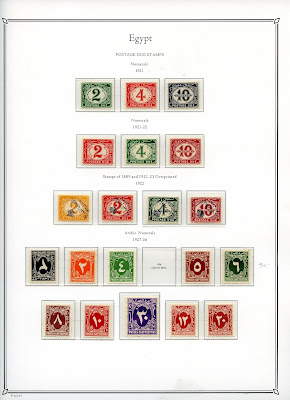 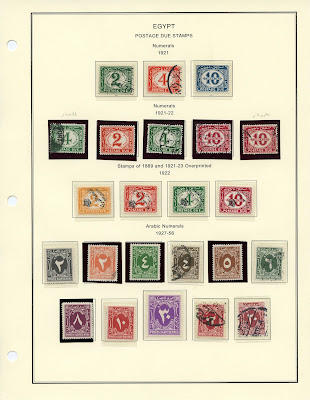 And here is the identical Steiner page for Egypt Postage Due 1921-1956.

One will  note that the fonts are different between the Palo and Steiner, but the worded information is the same. 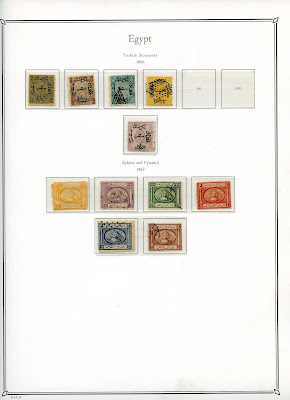 If one was astute, one may have noticed that my Palo pages do not have stamp illustrations in the stamp spaces. That is because I have an earlier Egypt Palo version (C 2004, 2008).

Today, all Palo premium pages have colored illustrations in the stamp spaces as the default.

This is a bit controversial among collectors - how does one tell if you have the stamp, or merely the illustration of the stamp? ;-)

The Lindner T-Blank system pages, for instance, only offer black & white illustrations for the stamp spaces precisely for this reason.

However, there is an option to order the Palo premium page illustrations in black & white (by presumption, for the same price as those with colored illustrations).

I would be interested in hearing from any premium Palo album owners with stamp space colored   illustrations to hear how they view it. 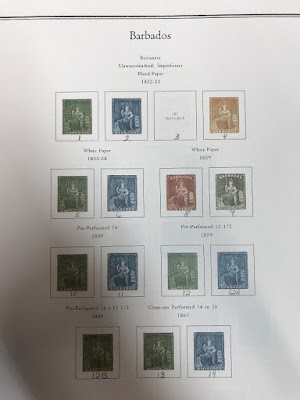 Palo-Barbados 1852-1861
Colored Illustrations
Here is a scan pic from the internet, showing the present day Palo premium pages with the colored stamp illustrations within the spaces. 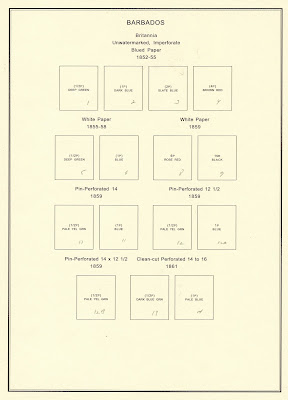 Steiner- Barbados 1852-1861
Descriptions in the stamp spaces
And here is the comparable Steiner page for 1852-61 Barbados with the denominations and color descriptions within the spaces. 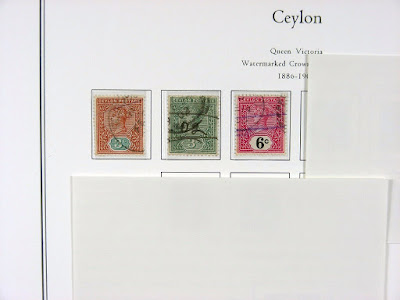 Palo- Ceylon
Scan pic from Internet
Of interest, I noticed that a seller of  Ceylon stamps housed in a Palo album felt the necessity to mask the empty colored stamp illustration spaces in order to show the real stamps for sale on the Palo page. !! 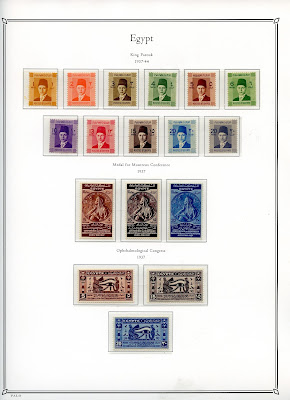 Palo
Egypt 1937-44, 1937
One of the things I like about Palo as they do offer natural country groupings together for a discount. So, for instance, if one is collecting British West Africa, or Portuguese Colonies, one can order them as a set. 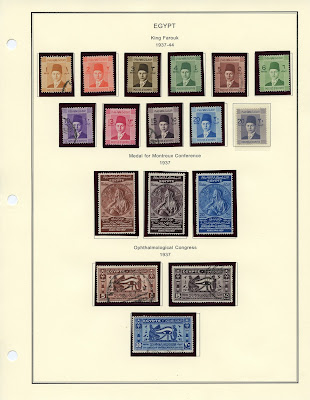 But, as said, one does need to work to get the Steiner page presentable, rather than order an already put together solution.

One has to admit that, for a 'downstairs" product, the Steiner does a fine comparable job at the core - providing spaces for the stamps- when measured against the "upstairs" premium Palo. 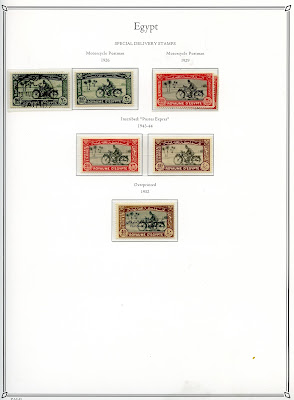 Palo page (Regular edition - spaces past 1940)
Egypt Special Delivery 1926-52
At first glance it appears that the Palo here and the Steiner below are not related. But Palo uses the regular or general edition Steiner pages, without date cutoff, while my Steiner pages  are from the classic edition with a ~1940 cutoff for displaying spaces. 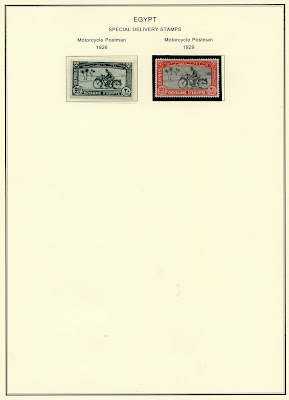 Steiner page (Classic edition - spaces to ~1940)
Egypt Special Delivery  1926-1929
Steiner is sometimes accused of not putting many stamps on a page. Well, that may be true. But it is done in the interest of keeping categories (here Special Delivery) separated on their own page as Scott does in their catalogue. (This drives collectors from across the pond crazy. ;-) 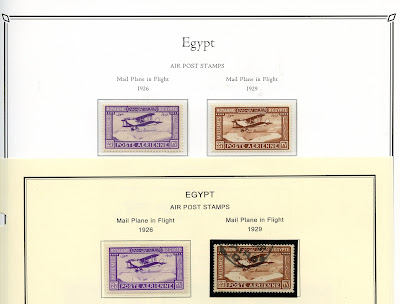 Palo & Steiner
Egypt Air Post 1928 & 1929
Border comparison
A picture is worth a thousand words: note the expansive borders in the Palo, yet the meat and bones of the page reflect the Steiner heritage.

Note the stamp spaces themselves are separated by the same distance in both the Palo and Steiner.

In other words, the stamp spaces take up the same area.

But the border has been widened to offer a more spacious presentation. 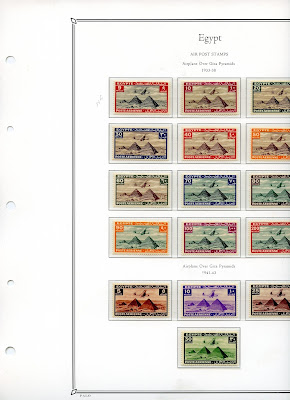 A lot of space on the left with Palo pages
Egypt Air Post stamps 1933-38; 1941-43
"Airplane over Gaza Pyramids"
It;s a shame to not show the entire group of stamps here, but my flatbed scanner is not wide enough for the Palo page. I took this scan to emphasize the left side of a Palo page, which is not shown with the other scans.

Palo does state at their website that a customer can special order any number of pages (or year cutoff) they wish. 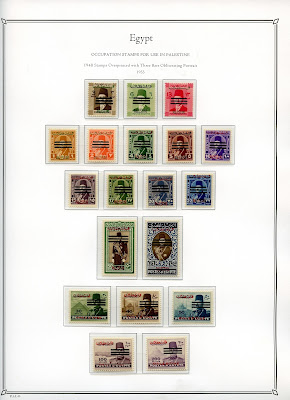 Palo page
Egypt 1953 Occupation stamps for use in Palestine
(1948 stamps printed with three bars obliterating portrait)
An area I had not paid attention to in the past are the occupation stamps for Palestine. This album comes with full coverage of the era. I will need to get beyond my general self imposed limit of 1840-1940, and enjoy these stamps and the history that they signify. 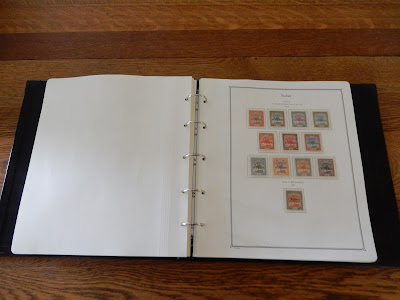 Palo page
Sudan 1902-21 "Camel Post"
This Palo "Egypt" album also contained pages for Sudan. Considering that Sudan's 1897 stamp output began with overprinted Egyptian stamps of 1884-93, it makes sense to include Sudan with Egypt. And the fact that they are neighbors, and were under the mutual hegemony of Britain binds them together more.

Note the leisurely use of wide borders and paper in the Palo, giving a feeling of spaciousness. 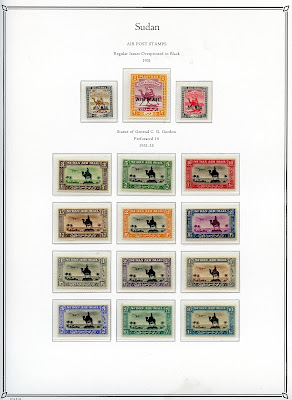 Palo page
Sudan Air Post
1931, 1931-35 "Statue of General C.G.Gordon"
I trimmed the scan of this Palo page to just outside the borders to frame the page. 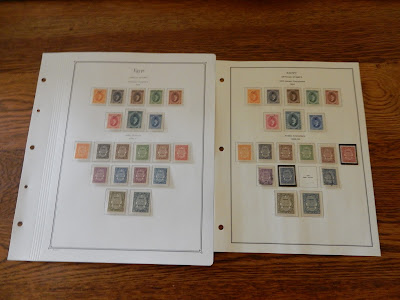 And the fact that they use the Steiner stamp space format, which follows the present day Scott catalogue, is actually, in my mind, an asset too.

For a Steiner user, switching to a Palo album would not be hard at all.

And, especially for those countries in which one would like to house in "elegant presentation mode", it might be tempting to use Palo.

So, in this case, I have both Steiner and a Palo pages - which one will I use for the primary Egypt  collection?

Note: All the pages shown in my Palo have stamps in the spaces, not illustrations.  Although it is a bit difficult to tell, especially with the pics, there are no "colored stamp illustrations" in my earlier edition Palo.

I do show two Palo pages with colored illustrations harvested from the internet (Palo-Barbados-1852,61; Palo-Ceylon). These scan pics appear to be in the public domain.