Bechuanaland Protectorate - A closer look at the stamps 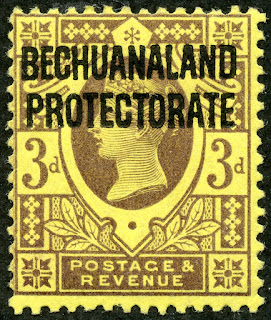 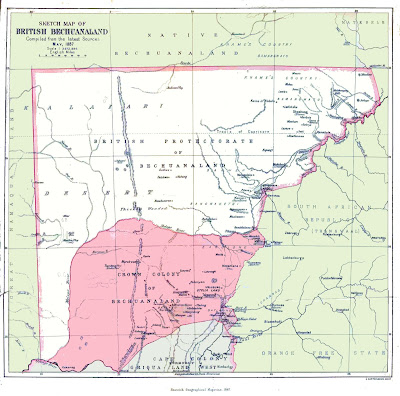 The two sister territories eventually had much different fates, however. British Bechuanaland was absorbed into Cape Colony (1895), and then into South Africa. Bechuanaland Protectorate became independent Botswana in 1966. 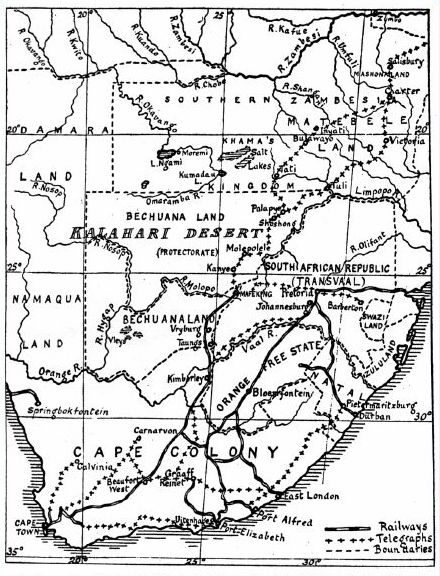 Sketch Map of South Africa 1896
Showing Railways, Telegraphs, and Boundaries
The rudimentary Bechuanaland Protectorate postal system began in 1888, and used runners to go between villages - namely a 500 mile route from Mafeking to Bulawayo across the Protectorate. Stamps of British Bechuanaland (1887 Scott 10 1/2p vermilion) were overprinted "Protectorate" in black, and used between 1888-1890. These are rather expensive (CV $10+-$200+), and I don't have any.

The runner post was replaced a year later by a mule drawn cart service between the rail head at Vryburg and Shoshong  (Palapye) in the Protectorate. 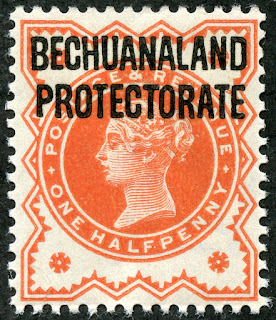 The sixteen stamps issued prior between 1888-1890 are rather expensive to very expensive ($thousands), and probably divide the specialist from the WW collector. Since I'm a WW collector, I feel content beginning with the 1897 issue. ;-) 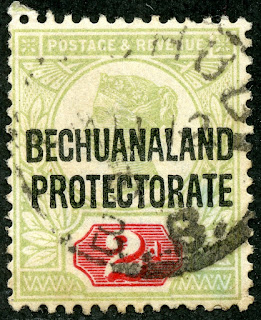 One of the more interesting things to do with old colony or protectorate stamps is to identify the postmark. Alas, in this case, I haven't been able to do it. 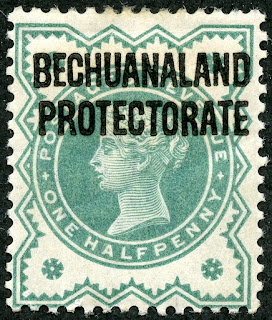 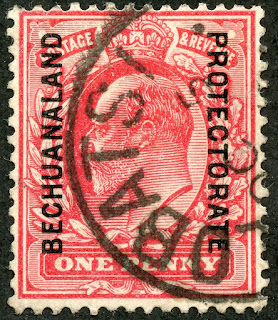 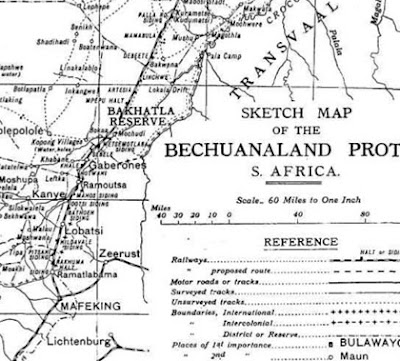 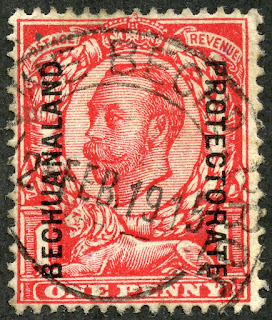 This is a clear February 2, 1915 date usage, although the town is not clear 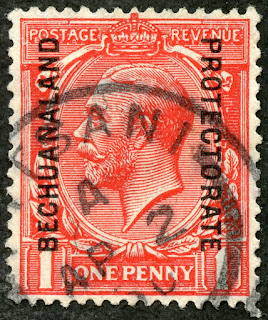 Pitsani is on the north bank of the Molopo river. One of the subsidized schools for Europeans was located there. Postal services were open 1898-99, and then after 3-1-1920. 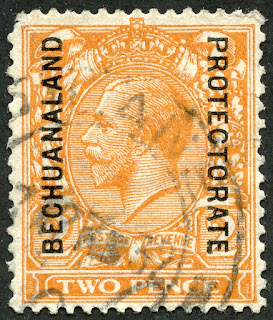 1924 Scott 86b 2p orange
It is tough figuring out the postmark, but I believe  this is Pilane (Station), which was established  May, 1928. It was a  Postal agency under Mafeking, used to be called Mochudi Station 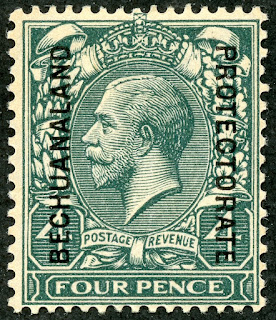 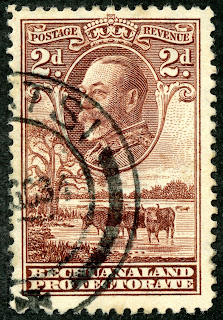 1932 Scott 107 2p red brown
George V, Cattle and Baobab Tree
In 1932 a twelve stamp set was released, all with this design, showing George V, cattle drinking, and a Baobab tree.

Baobab trees can be found anywhere in present day Botswana, north of the Tropic of Capricorn (north of 23 degrees south equatorial latitude), about the upper two-thirds of the country.

This stamp has a Lobatsi postmark. 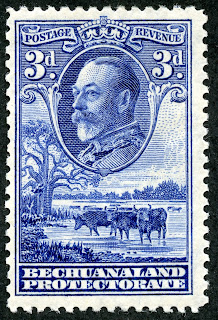 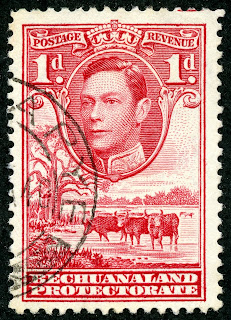 The postmark is probably  Palapye (Palapye Station, Palachwe (earlier cancellations exist, but had a post office from March, 1937). 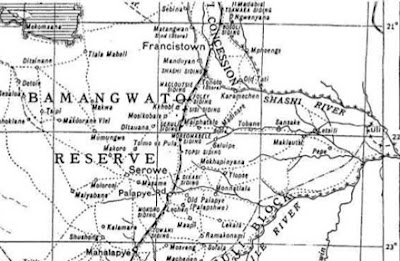 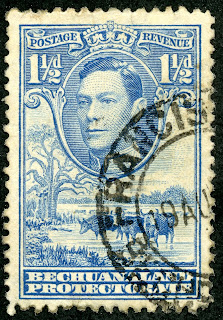 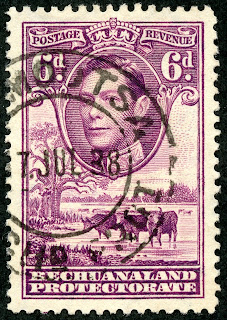 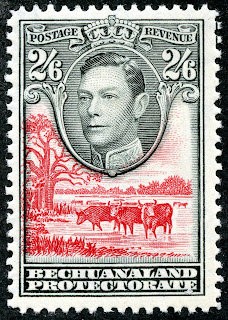 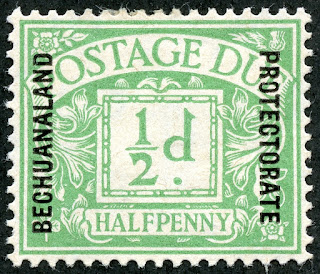 1926 Scott J2 1/2p emerald
PD stamps of GB Overprinted
In 1926, a two stamp issue for postage due purposes was released. These are overprinted on GB postage due stamps. CV is $10+. 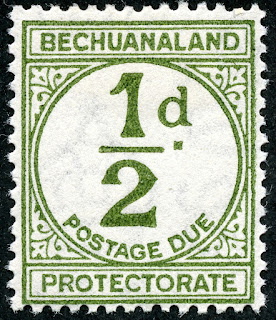 In 1932, a three stamp postage due issue was released.  Note one can see Wmk 4 ("Multiple Crown and Script C A ") watermark on the white oval background. 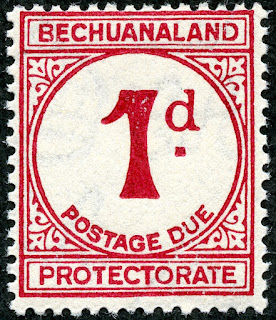 1958 Scott J5a 1p carmine
Chalky Paper
Of interest, in 1958, the 1p carmine and the 2p violet of this 1932 design was released on chalk surfaced paper. They are given bolded minor numbers in Scott. CV is $1+. 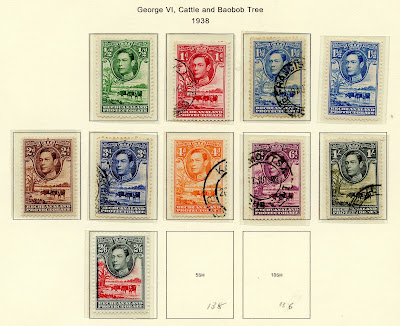 1938 Issue in Deep Blue
Deep Blue (Steiner) has ten pages for the 1888-1949 stamps of Bechuanaland Protectorate. All of the major Scott numbers have a space. 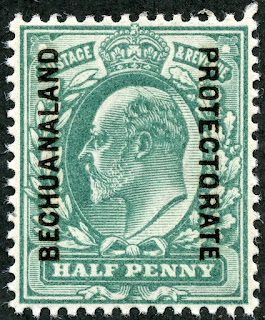