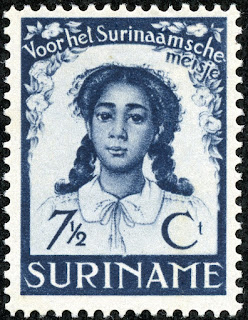 The languages commonly spoken in Suriname is Dutch (official), and Sranan Tongo (Surinamese Creole) as a lingua franca.

The climate is hot and sticky year round- no other way to put it. ;-) 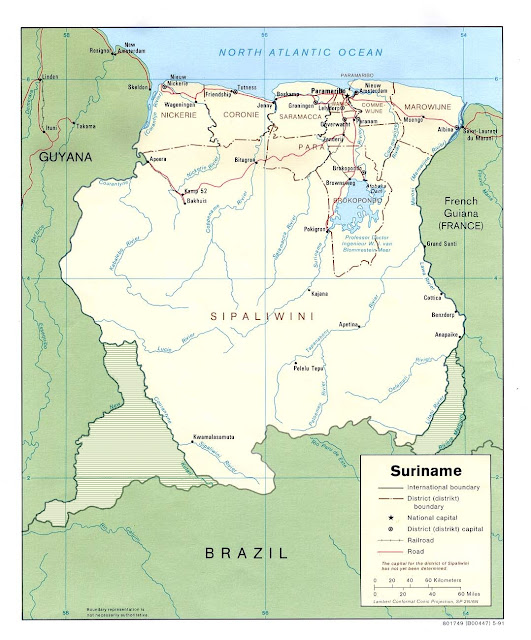 Suriname
The United States had a role in Suriname history, as the country was occupied by 1,600 troops in 1941 at the "request" of the Netherlands government-in-exile to protect bauxite mines.This raw material, which is used to make aluminum, provided 65% of the needs at the time for the U.S. aviation industry.

This made a large portion of the population nervous, and fully one third (including most of the whites) eventually emigrated to the Netherlands.

In 1980, a military coup (December Killings), lead by the dictator Desi Bouterse , resulted in the execution of 15 prominent citizens who had criticized the military dictatorship. 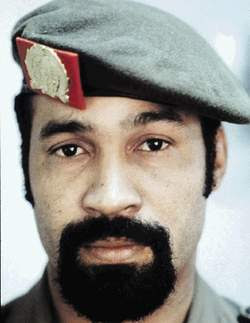 Desi Bouterse, Dictator (1980-87) and President (2010-) of Suriname
Bouterse was never held responsible for these killings, and this has soured the relationship between the Netherlands and Suriname. ( In 2000, he was convicted of drug smuggling charges (474 kilos of cocaine) in absentia by the Netherlands.)

In fact, Bouterse returned to power as the new President of Suriname in 1910. In 2012, the Suriname Parliament voted a "December Killings" amnesty law which shields Bouterse and 24 other suspects. 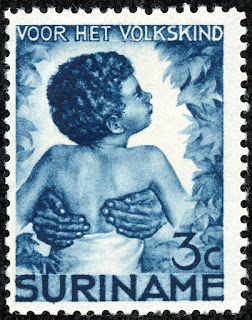 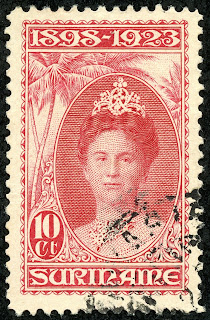 When Wilhelmina was four, she became heir presumptive, and when King William III, her father died on November 23, 1890, she became Queen at ten years old. Her mother, Emma, was named regent.

Then on September 6, 1898, at the age of eighteen, she was enthroned, and assumed full government function as queen. And that is what the seven stamp issue of 1923 celebrates: the 25th year anniversary of that occasion. Curacao (Netherlands Antilles) and the Dutch Indies had similar issues. 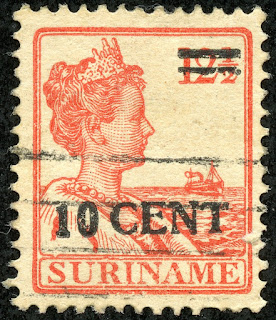 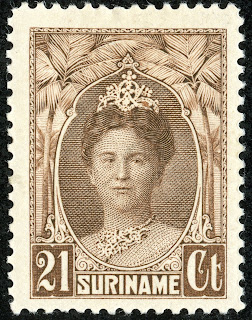 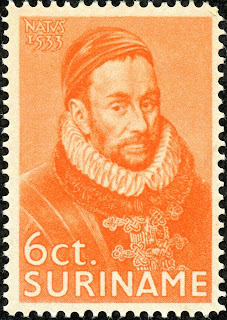 1933 Scott 141 6c deep orange "William the Silent"
In 1933, a single stamp was released for the 400th anniversary of the birth of Prince William I, Count of Nassau, and Prince of Orange. I thought that "Silent"  meant he was taciturn, but it really refers more to the fact that he was being politically astute by not saying much initially during the great revolt of 1568 between the Catholic Philip II of Spain and the Protestant Netherlands.

I note that the other Dutch colonies (Curacao, Dutch Indies) also released an identically colored stamp with the same design, save for a change in the colony name. 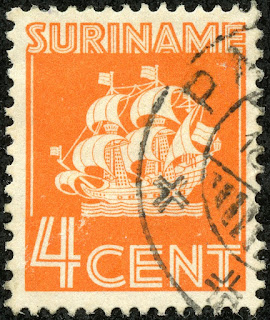 1936 Scott 148 4c orange "Van Walbeeck's Ship"
Van Walbeeck was a navigator and cartographer on the ship De Amsterdam during the circumnavigation of the world between 1623-1626. In 1627, he sailed to the Dutch East Indies. In 1634, he became the first governor of the Netherlands Antilles. Between 1638-1647, he also spent time in Brazil. I can't find direct documentation that he was ever in Surinam as such, but interestingly, it is Surinam that has a drawing of his ship on ten stamps issued between 1936-41. 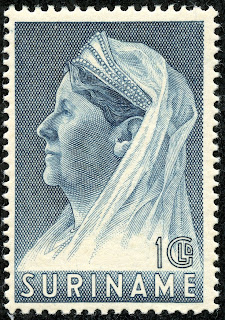 1936 Scott 161 1g dull blue "Wilhelmina"
The same 1936-41 issue for the higher denominations has an image of the older Queen Wilhelmina on twelve stamps. This Wilhelmina image is engraved, and is really a lovely and detailed rendition of the engraver's art. 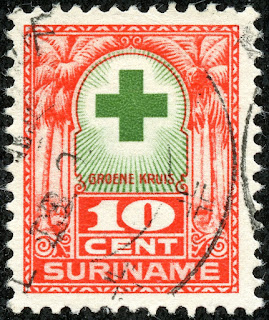 1927 Scott B3 10c (+3c) vermilion & green "Green Cross"
Surtax to promote Public Health Services
The semi-postal stamps of Surinam begin with a three stamp 1927 bicolored issue, with the surtax dedicated to the Green Cross Society, which promotes public health services. Surinam appears to be the only Dutch colony where this charity/organization is active. 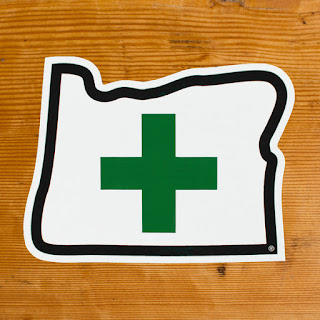 Green Cross Oregon
The "Green Cross" symbol has become ubiquitous recently in my home state of Oregon, but for an entirely different reason. It is where one goes to obtain cannabis. ! 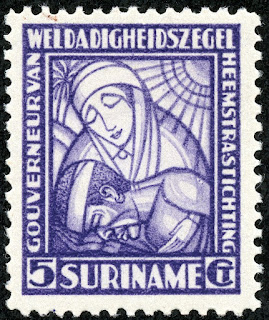 1928 Scott B6 5c (+3c) violet "Nurse and Patient"
A four stamp semi-postal issue, using photogravure, was released in 1928, with the surtax dedicated for a fund to combat indigenous disease. I really like this design! 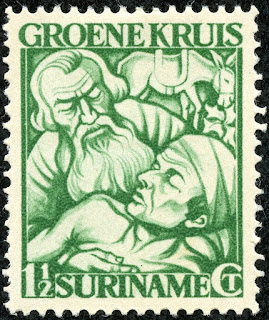 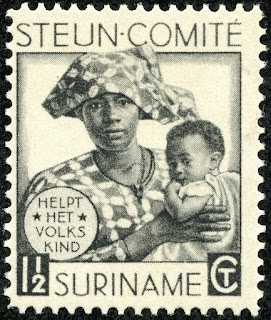 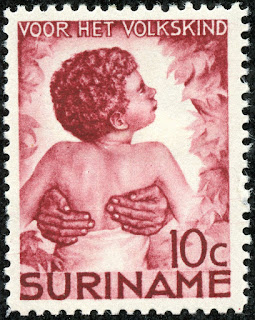 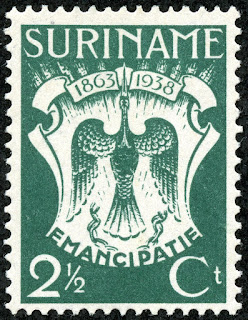 1938 Scott B26 2 1/2c (+2c) dark blue green "Emancipation"
75th Anniversary of the Abolition of Slavery
In 1863, the Dutch emancipated the slaves who worked the plantations in Surinam. (Actually, the slaves were still indentured for ten more years at low wages on the plantations before they could leave.) 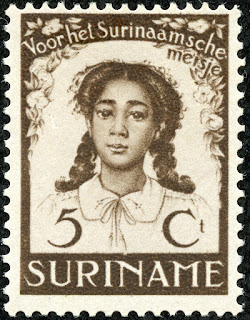 1938 Scott B28 5c (+3c) dark brown "Surinam Girl"
The "Abolition of Slavery" issue of 1938 showed, on the three higher denominations, this absolutely stunning photogravure drawing of a "Surinam Girl". This image ranks among the top of my all time favorites for subject/design. :-)

The surtax was for the Slavery Remembrance Committee. 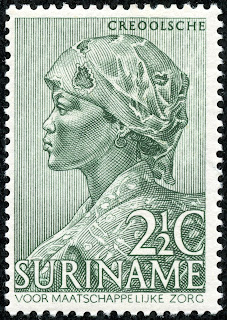 The surtax was for leper care and baby food. 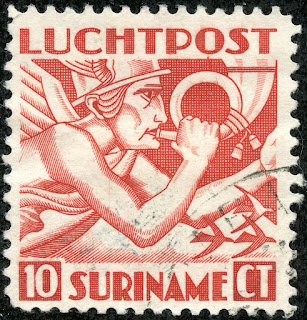 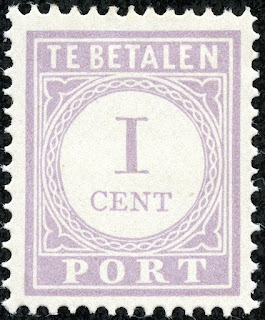 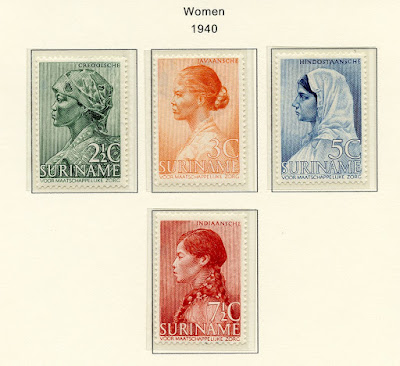 
Deep Blue (Steiner) has fifteen pages for the 1873-1938 stamps of Surinam. All the major Scott numbers have a space. 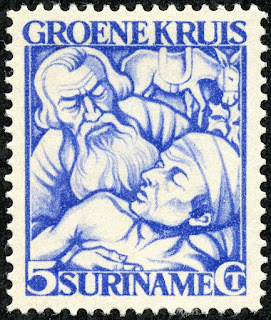 1929 Scott B10 5c (+3c) ultramarine "Good Samaritan"
Surtax for the Green Cross Society
Big Blue
Big Blue '69, on five pages, has 155 spaces for the stamps of Surinam. Included is a generous selection of the fine semi-postal issues. Overall coverage is 64%.

The Surinam Part A post includes the Big Blue Checklist. 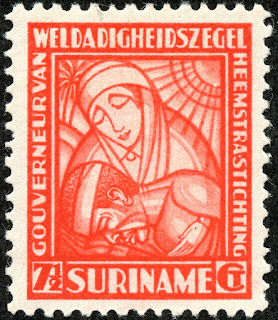 1928 Scott B7 7 1/2c (+2 1/2c) vermilion "Nurse and Patient"
Surtax for Fund to combat Indigenous Disease
Out of the Blue
Wonderful semi-postal stamps. But regrettably, the modern political history of Suriname is off-putting.

Note: Map, Bouterse pic, and Green Cross pic appear to be in the public domain.

Comments Appreciated!
Posted by Jim at 11:18 AM