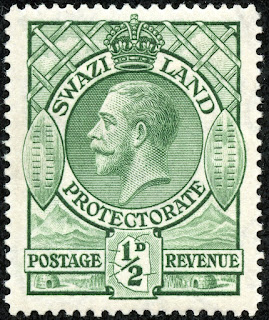 1933 Scott 10 1/2p green "George V"
Quick History
The tiny Kingdom of Swaziland, today still sovereign, and an absolute monarchy, is situated in Southern Africa. The Swazi people, under the leadership of King Mswati II (reign 1840-1868), unified and consolidated the territory, with the borders finalized in 1881. 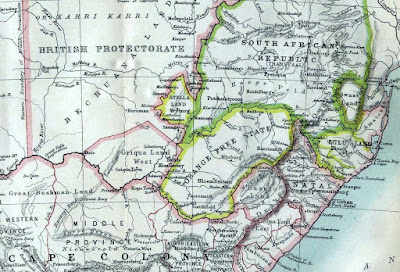 In 1894, Swaziland became a South African Republic (Transvaal) Protectorate. The overprinted stamps of Swaziland were replaced by those of Transvaal in 1895.

With the British victory in the Second Boer War, Swaziland became a British Protectorate in 1903. Administration of Swaziland was transferred from Transvaal to the British High Commissioner for South Africa in 1906.

Swaziland's own stamp issues were resumed in 1933.

The administration of Swaziland (and Bechuanaland Protectorate) was assumed by the British High Commissioner for Basutoland in 1934.

Swaziland in South Africa
The population was 156,000 in 1936, and the administrative capital was and is Mbabane.

I should mention that the lands were partitioned into a European area (two-thirds) and a Native Reserve area (one-third).

Swaziland remained a British Protectorate until 1968, when independence was achieved.

Swaziland
As mentioned, Swaziland is an absolute monarchy, although governed by a constitution, Swazi Law, and Swazi customs. 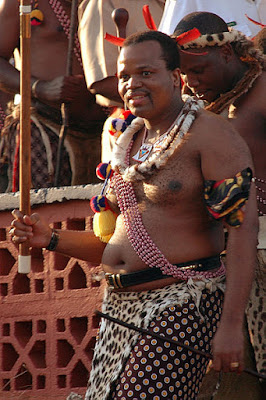 Ingwenyama Mswati III, King of Swaziland since 1986
By tradition, the king reigns along with his mother.... or a ritual substitute Ndiovukati (She- Elephant). Polygamy is part of the traditional Swazi culture. Currently, the King has fifteen wives. 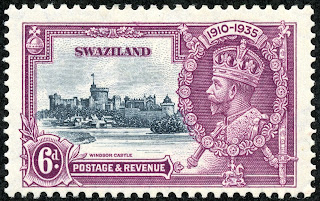 The overprinted nine stamps of 1889-92 Transvaal, though, are rather expensive (CV $10+-$175), and the WW classical collector may not have any (I don't). In addition, one has to be aware of overprint counterfeits. 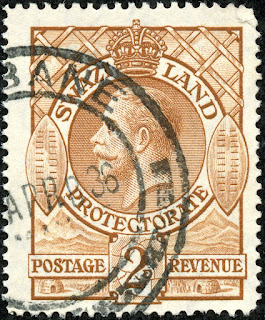 1933 Scott 12 2p light brown "George V"
Swaziland was late to adopt their own stamps as a British protectorate, with the first Swaziland issue released in 1933. The issue consisted of ten stamps, with George V in the central vignette.

The more interesting aspect of the design, however, are the Swazi embellishments. 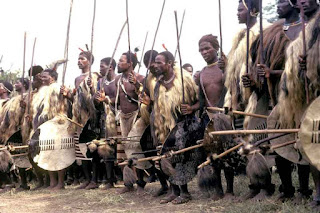 Swazi Ox Hide Combat Shield
On either side of the vignette are images of the Swazi ox hide combat shield carried in the 1920s by the Emasotsha traditional Swazi regiment. 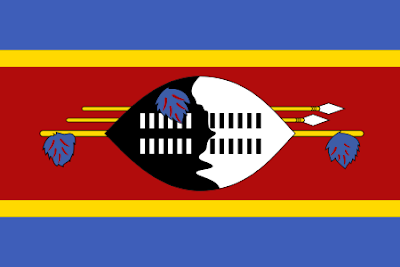 State and War Flag of Swaziland
The shield also is found illustrated on the state flag for the Kingdom of Swaziland. The flag is based on the one given by King Sobhuza II to the Swazi Pioneer Corps in 1941. 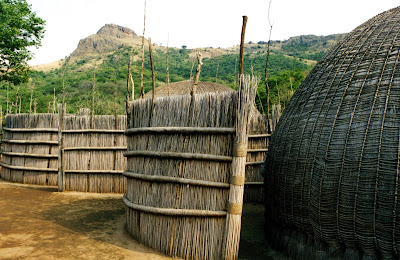 Traditional Homestead with Beehive Huts thatched with Dry Grass
Found on the lower portions of the 1933 stamp design are images of the beehive hut. The primary family social unit is the "homestead", which consists of beehive huts, one for each wife in a polygamous homestead, surrounded by reed fences. A great hut, facing the cattle byre, is the home of the mother of the headman. The headman, usually polygamous, leads the homestead. 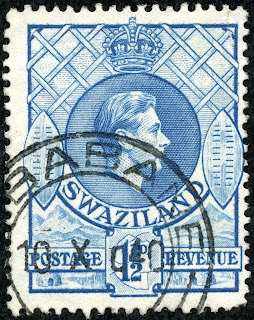 The South Africa 1945 three stamp issue, celebrating the WW II victory of the Allies, was overprinted for Swaziland. 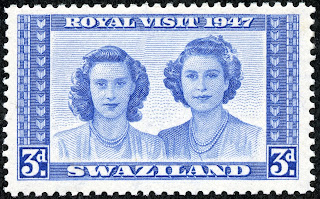 1947 Scott 46 3p ultramarine
Royal Visit Issue; Type of Basutoland, 1947
Princesses Margaret Rose and Elizabeth are featured on one of the three stamps issued for the visit of the Royal Family on March 25, 1947. An identical set, save for a change in country name, was issued for Basutoland. 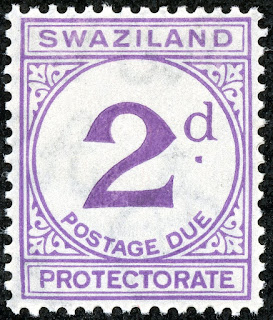 1933 Scott J2 2p violet
Postage Due
A rather bland postage due set of two stamps was issued for Swaziland in 1933. But an unused 2p violet has a CV of $2+, while a postage due stamp on a properly franked commercial cover is CV $225! 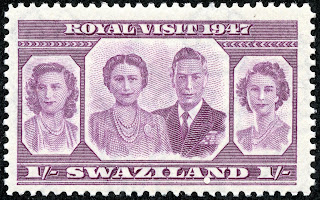 Big Blue does not provide spaces for the earlier 1889-92 overprinted stamps of Transvaal: probably for the best, as they are rather expensive.

The 1940s editions of BB have identical coverage.

There are no expensive stamps (threshold $10) required to fill BB. 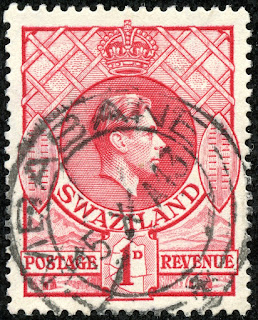 1938 Scott 28 1p rose carmine "George VI"
Out of the Blue
I would have liked to have had more native and Swaziland illustrations and scenes on the issued stamps. But since Swaziland was a protectorate during this time period, what we get are British monarchs. ;-)

Note: Maps and pics for this blog post appear to be in the public domain.