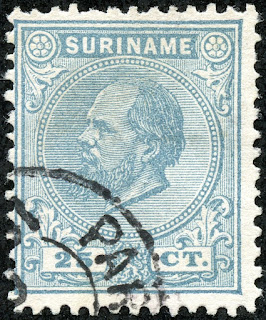 1873 Scott 10 25c greenish blue "William III"
Quick History
In 1667, with the Treaty of Breda, the Dutch gave away all rights to New Amsterdam to the British; and, in exchange, they were assured of the ability to colonize Suriname. Clearly, of all the bad trades among nations, this has to be, by any objective measurement, the worst, as any Dutch citizen will ruefully admit as they arrive at the most expensive real estate on earth- Manhattan. ;-)

Suriname, derived from the indigenous Arawak name, or Surinam, what the original British settlers called the area, was taken over by the Dutch, then, in 1667, and became part of a group of Dutch settlements or colonies known collectively as Dutch Guiana. In later years, Dutch Guiana referred to the remaining Dutch colony of Surinam, as the British merged the former Dutch settlements of Berbice, Essequibo, and Demerara into British Guiana.in 1831.

Surinam on the north-east coast of South America
Surinam was a Dutch plantation colony, and slaves were imported by the Dutch West India Company from West Africa to work the sugar cane, cotton, indigo, and (later) coffee crops. 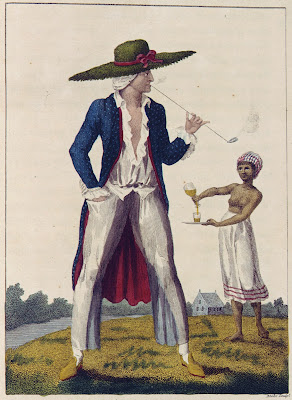 Dutch Plantation Owner and Slave, circa 1792
The treatment of the slaves was poor, to say the least, and many escaped into the surrounding rain forests. The Maroons ( Dutch: Bosnegers), formed from an indigenous mixture of Arawaks, Caribs, and escaped African slaves, developed their own culture and tribes, and became a potent force in the area. 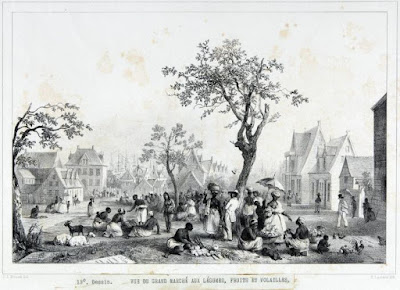 Paramaribo market - 1830s
Slavery was abolished by the Netherlands in 1863, but slaves were still required to work on the plantations until 1873.

Stamps were introduced in 1873, showing the portrait of King William III.

With freedom, the slaves left the plantations, and largely moved to Paramaribo, the capital and the largest city. 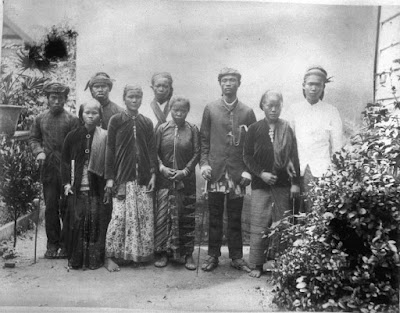 To be continued with Surinam Part B..... 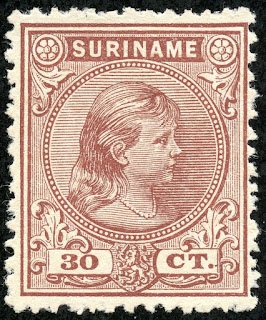 Surinam, of course, is in a tropical zone. But the Netherlands postal authorities had the good sense to ship stamps to Surinam ungummed from 1873-1912. There, most of them were gummed locally. But that means the unused stamps can often be found in good condition today without gum degeneration and stains. Just don't expect gum on the back! ;-) 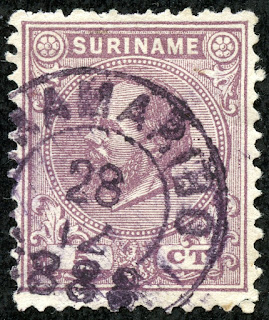 1873 Scott 5 5c dull violet "King William III"
The first issue for Surinam consisted of sixteen stamps released from 1873-1888. These were important years for the colony, as the African slaves had just been freed from the plantations, and many new contract worker immigrants- primarily from India and the Dutch East Indies- were arriving.

The portrait of King William III was the same as used for the Netherlands 1872-88 issue. 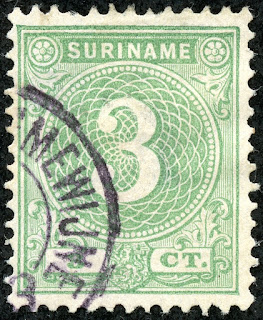 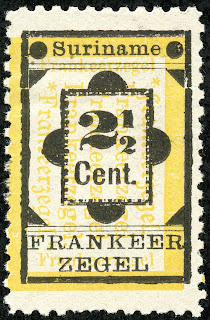 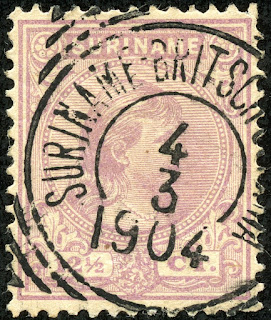 The postmark is rather curious. Readers? 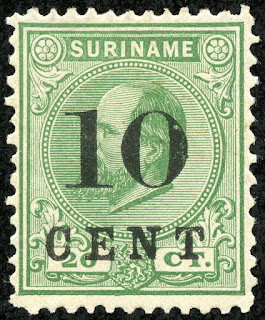 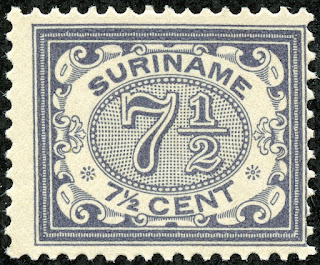 1908 Scott 50 7 1/2c gray
The Netherlands have a tendency, besides showing the monarch, to print "Numeral of value" typographic designs for their classical era stamps- rather functional, but I think elegant also.

The 1902-08 seventeen stamp issue has these functional stamps for the seven lower denominations. 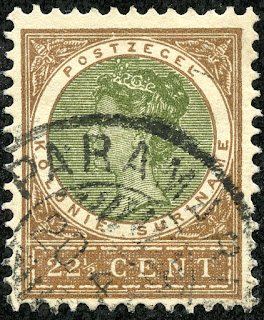 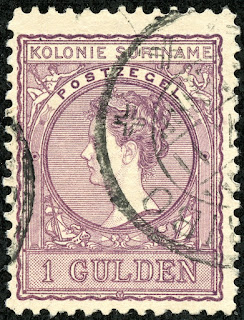 1902 Scott 59 1g violet "Wilhelmina"
The two highest denominations are in a larger format, and have a lovely alabaster portrait of the young queen. 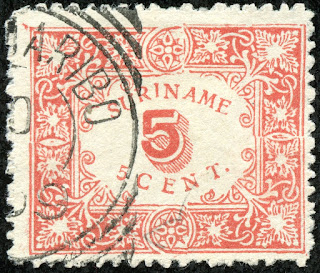 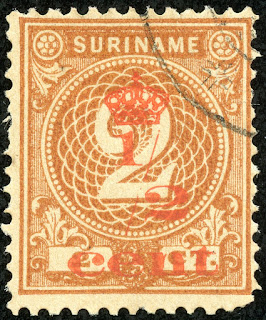 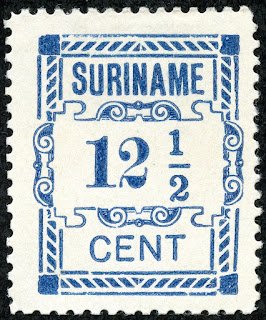 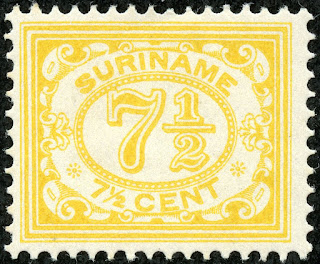 1931 Scott 89 7 1/2c yellow "Numeral of Value"
Between 1913-1931, a three design thirty-five stamp issue was produced. The lower eleven denominations in eighteen colors have the functional "Numeral" design. Compare to the earlier 1902-08 issue. 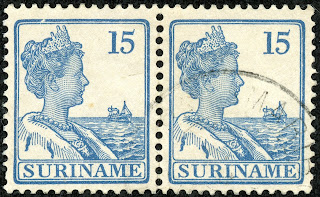 Did Queen Wilhelmina ever visit her colonies?

No Dutch monarch ever visited the Dutch East Indies, but her daughter Queen Juliana visited Suriname and the Antilles (Curacao) in 1955.

But she (Wilhelmina) was one of the stronger monarchs ever, beloved by her people during her nearly 58 year reign. She is especially remembered as a rallying force for the Dutch resistance during WW II. 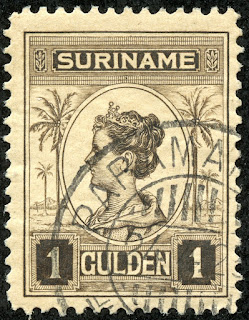 1913 Scott 106 1g brown "Wilhelmina"
The four highest denominations have a larger format design with tropical palms on either side of the Queen visage. This same design, save for a change in the colony name, was used for the Dutch East Indies and the Antilles (Curacao). 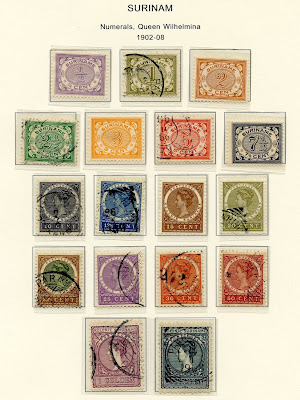 The 1886-88 postage due stamps come in four types, and the 1892-95 postage dues come in three types. Steiner only gives a space for the major type. Therefore, a quadrilled page or two will be needed if one wishes to parse these issues into minor number types. 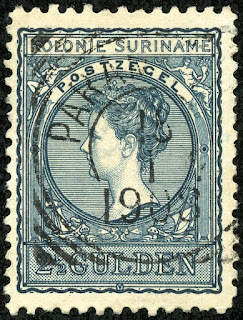 1902 Scott 60 2 1/2g slate blue "Queen Wilhelmina"
Big Blue
Big Blue '69, on five pages, has 155 spaces for the stamps of Surinam. Included is a generous selection of the fine semi-postal issues. Overall coverage is 64%. 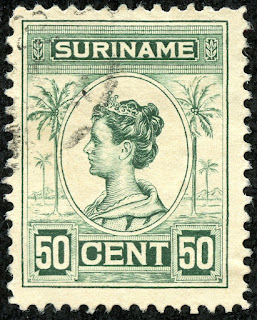 Note: Maps, prints, and pics appear to be in the public domain.