Senegal Bonus Coverage- The Three Types of the 1914-33 Issue 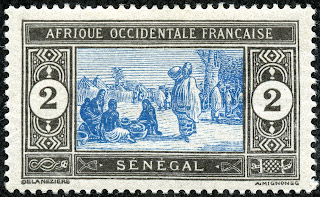 1914 Scott 80 2c black & blue, Maury Type I
"Senegalese Preparing Food"
Into the Deep Blue
The Senegal typographic issue of 1914-1933 seems relatively straightforward. Typical of many French colony issues, there is a long run of stamps for this production, from 1914 to 1933, and some 44 stamps in the Scott catalogue. There is only one design, a local market scene of the Senegal natives preparing food. As I mentioned in my earlier post, the CV for this series is remarkably inexpensive @ <$1-$3.

But there is more to the story.

DJCMH, who follows the French colonial issues enthusiastically, and recently has begun his own blog  (very nice- check it out!), alerted me to the nuances of this issue.

"And here is another example of where having a specialized catalog can add all sorts of new collecting varieties. The 1914-1933 Market Scene pictorials come in three different types depending on minor variations in the central image. Maury outlines the differences and most of the values have at least 2, if not all 3 types, in existence. Get out a good magnifier and have fun as none of the varieties seem to carry much of a premium, but represent the changes that happen during the course of a long-lived definitive series.
The one interesting thing is that Maury only lists types for Senegal. It may be that more research would be needed but I would not be surprised if other French colonies have similar varieties, but they have not been studied to the same degree as Senegal's issues."

Now, as it turns out, between the time I prepared the Senegal blog post and it's publication, I did receive Maury's catalogue- Timbres de l' ex-empire francais d' Afrique.

Reviewing my own collection, I found a number of "types" for various values. Fun!

So, as a bonus, let's look at the types of this "one pictorial" issue. 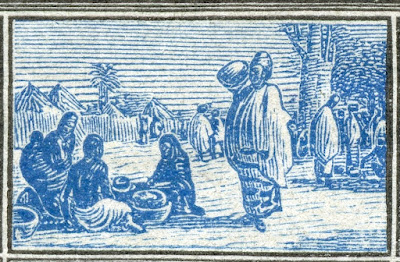 Pictorial close-up of Scott 80 - Type I
The Type I print was used between 1914-1922. Measuring horizontally, the pictorial is 22 mm. There are several salient characteristics. (Maury has more detail, discussion (in French naturally), and images- worthwhile to buy the catalogue!)

* The image is generally the clearest and cleanest of the three types.
* Note the hut in the background on the left? If it has a short vertical line on the top of the hut, that is diagnostic for Type I. (Type II and III do not show this.)
* Note the bowl at the lower left that is cut-off by the frame? (Type II's bowl is elongated here.) 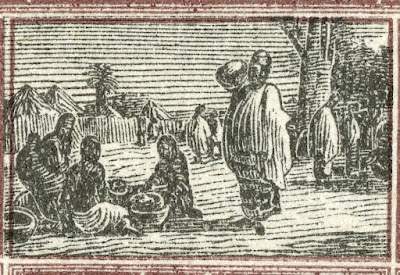 * The image is generally a little rougher than Type I.
* The hut on the left does not have a short vertical line at the top.
* Note the bowl at lower left continues through the frame, and is elongated compared to Type I & Type III (diagnostic). 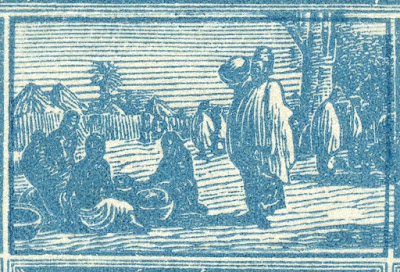 Pictorial close-up of Scott 113- Type III
The Type III print was used between 1922-1933. Measuring horizontally, the pictorial is 23 mm.

* The image is generally quite rough, darker, and smudgy.
* The hut on the left does not have a short vertical line at the top.
* The bowl on the lower left is again cut-off by the frame.

If one is using the Scott catalogue, here are the type possibilities... 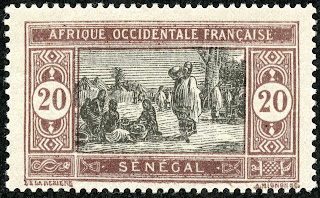 1914 Scott 88 20c chocolate & black, Maury Type II
Out of the Blue
Why should specialists have all the fun? ;-) These stamps are inexpensive, and they offer the thrill of "discovery" in ordinary collections, with a little bit of knowledge.

I highly recommend the Maury group of catalogues for the French sphere. There is much more in them than is presented here.