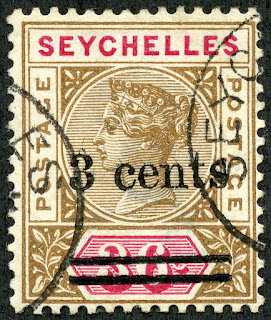 1901 Scott 31 3c on 36c brown & rose
"Queen Victoria"; Surcharged in Black
Quick History
Seychelles is an 115 island archipelago in the Indian Ocean, 900 miles (1500 km) from Southeast Africa. French and English and Seychellois Creole are the the spoken languages. The people, culture and food is a fusion of English, French, Chinese, Indian, and African influences. 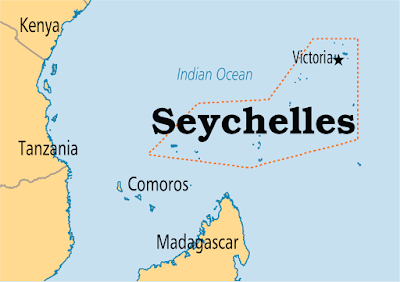 The Seychelles Archipelago in the Indian Ocean.
The Seychelles were uninhabited during historic times, so all current inhabitants are descendants of those that were brought to the islands. The British gained control over the French by 1810, but allowed the French settlers to remain.

Main inhabited portion of the Seychelles.
The islands were attached to the colony of Mauritius from 1810 to 1903. Seychelles became a crown colony in 1903.

Stamps for the Seychelles were introduced in 1890. Prior to that, there are examples of Mauritius stamps cancelled (B64 Obliterator) from 1861-1887.

The Seychelles have a tropical rain forest climate, and the temperature varies little throughout the year. Cinnamon, vanilla, and copra were the plantation era exports.

Independence occurred in 1976, and Seychelles remains part of the commonwealth. 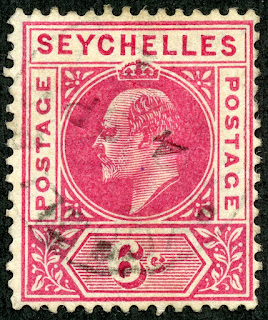 Of interest, there are 58 "A" prefix numbers of stamps from Mauritius used (cancelled) in the Seychelles between 1861-1887. These are expensive, are specialist territory, and I will say no more about them. 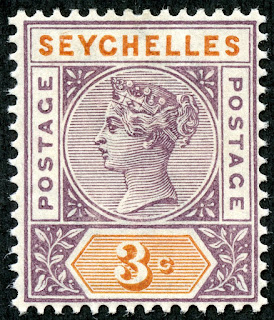 Die I on Scott 9a 13c slate & black
Of interest, the 2c, 4c, 8c, 10c, 13c, and 16c denominations can be found as Die I (minor numbers). There are three horizontal shading lines to the right of the diamond in the rectangle of the tiara band. 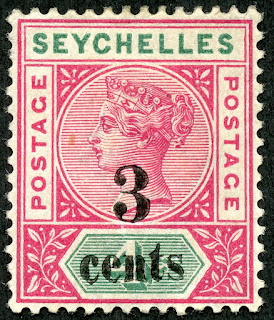 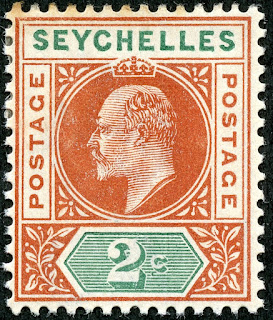 1903 Scott 38 2c red brown & green "Edward VII"
Watermark 2
In 1903, the first issue (eleven stamps) for Edward VII was produced. These are found on watermark 2. At the header of this "Into the Deep Blue" section, I also show a 6c carmine rose that is watermark 3 from the similar 1906 eleven stamp issue. Obviously, the 1903 and 1906 "Edward VII" issues need to be distinguished by watermark. 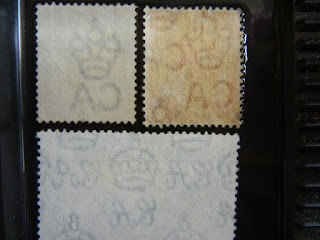 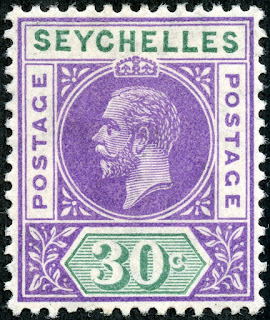 Note the "Postage....Postage" script on the white side tablets. 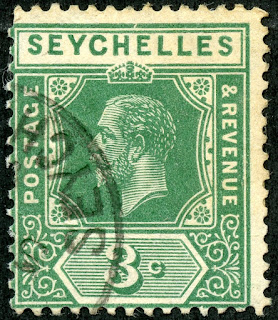 Note the "Postage......& Revenue" script on colored side tablets. 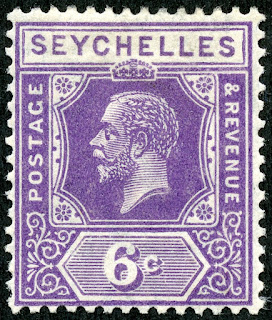 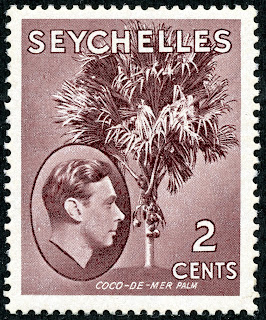 The "Coco-de-mer" is also known as the sea coconut or double coconut. It is endemic to the islands of Praslin and Curieuse in the Seychelles. It is mainly found in the National Parks on those islands. Fortunately, the Seychelles have been careful with their indigenous flora, and, as a World Heritage Site, a third of the area is now protected. 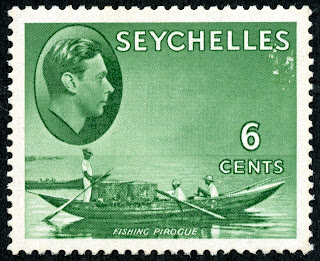 Of the 44 stamps issued from 1938-1949, Scott gives 20 of them bolded minor numbers. It is somewhat unclear to me what criteria Scott used for parsing.

1912 "George V" Issue in Deep Blue
Deep Blue (Steiner) has eleven pages for the stamps of the Seychelles. Of interest, Deep Blue includes spaces for the minor number 1890-1900 Die I stamps (eight spaces), and the 1917-20 Die II stamps (four spaces). 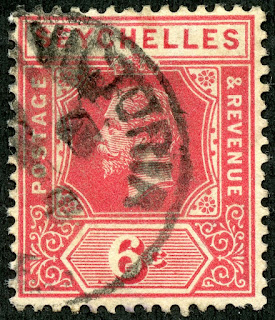 There are two "expensive" stamps and two "Most Expensive" stamps (CV $45-$70) required, all from the "1938" issue. This is because of color specifications by BB, although there are less expensive stamps of the same denomination issued in the 1940s in different colors. 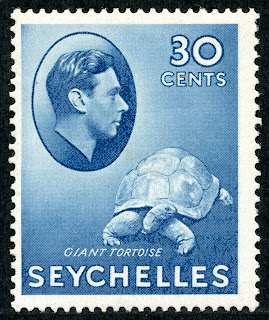 Comments appreciated!
Posted by Jim at 11:03 AM