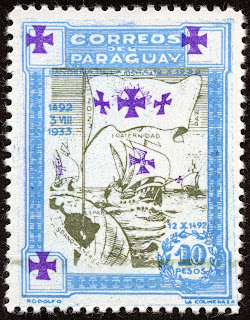 1933 "Scott 337" 10p multicolored Forgery
"Flag of the Race" Issue
Into the Deep Blue
Paraguay has a number of quite attractive issues, not the least the lithographic multicolored 1933 eight stamp "Flag of the Race" ("Bandera de La Raza") emission that celebrates the 441st anniversary of the first voyage of Christopher Columbus. (441st? I have no idea why. ;-)

I needed the last three stamps in the set, and when a national dealer was having a sale on Paraguay, off went my order. 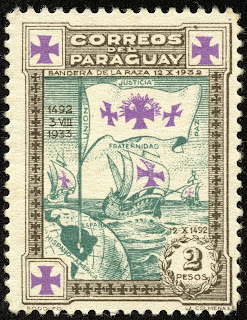 1933 Scott 335 2p multicolored Genuine
"Flag with Three Crosses: Caravels of Columbus
The design depicts the caravels of Columbus on the sea, and the flag with three crosses. Produced by lithography, the stamp has three colors, and would require three pass-through printings of the sheet to make the finished stamp. The first printing would be for the frame design, the second printing for the globe and caravels on the sea central design, and the last printing for the crosses, which are always in a violet color.

Quire striking, Yes? And the entire eight stamp set is only CV $6+ unused.

What could go wrong? 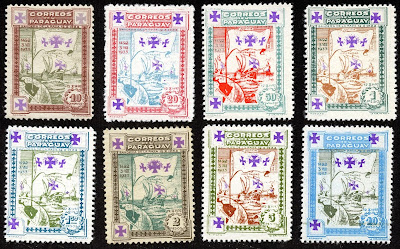 A lot as it turns out. I was surprised to find, among the apparent genuine 10c and 2p, six stamps that had the look of a sketchy cartoon of the originals.

I believe the sketchy stamps (in more ways than one) are reprint forgeries from someone who had access to the original, but now worn, plates. A quick review of the usual sources could find no information on these reprint forgeries. (I'm sure there has to be information somewhere, perhaps buried in some philatelic journal. If a reader has knowledge about these stamps, I would be grateful.)

Could the "reprint-forgeries" actually be a second stamp printing sanctioned by the Paraguayan postal officials? I suppose it is possible, but they are so bad in appearance, it is highly doubtful. ;-) 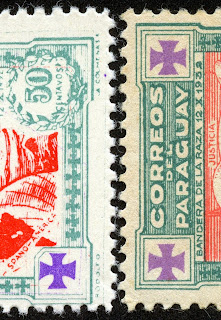 Horizontal Stamp Perforations
(Presentation is vertical here)
Forgery (~11.4) vs Genuine (~10.9)
Scott states the originals are Perf 11.  But I measured ~10.9 for the horizontal teeth, while the reprint-forgeries appear to be ~11.4 Perf horizontally. 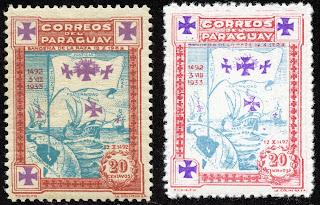 The impression of the forgery is that of a stamp on very white paper that has finer sections of the central design missing. The crosses running horizontally and vertically along the frame are more blob like. The colors (red, light blue, purple) are clearly different than the original.

And the second (central design) and third printing (crosses) of the stamp are carelessly shifted compared to the original.

All of the reprint-forgeries show a blob-mark inside the "U" of PARAGUAY. 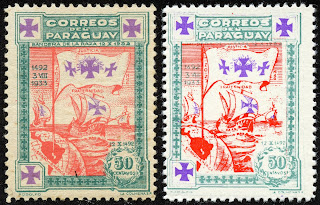 1933 Scott 332 50c multicolored
Genuine vs Forgery
The differences described for the 20c are found also for the 50c. Note the lack of horizontal lines by the small crosses on the frame. 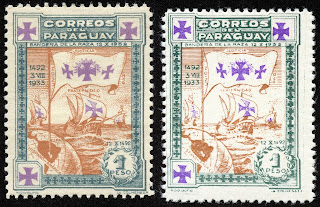 1933 Scott 333 1p multicolored
Genuine vs Forgery
The violet color crosses on the original are a more purple color on the reprint-forgeries. 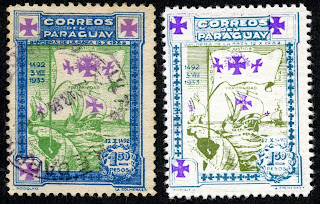 1944 Scott 334 1.50p multicolored
The 1.50p reprint-forgery shows all the forgery characteristics particularly well (that is poor and sloppy ;-) 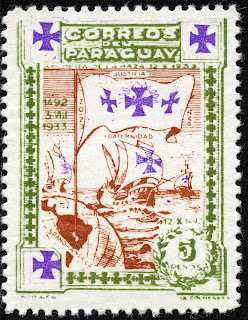 1933 "Scott 336" 5p multicolored Forgery
Out of the Blue
The dealer was not aware that such reprint-forgeries existed. But now he does. And now you do too. ;-)

Comments are appreciated!
Posted by Jim at 11:34 AM