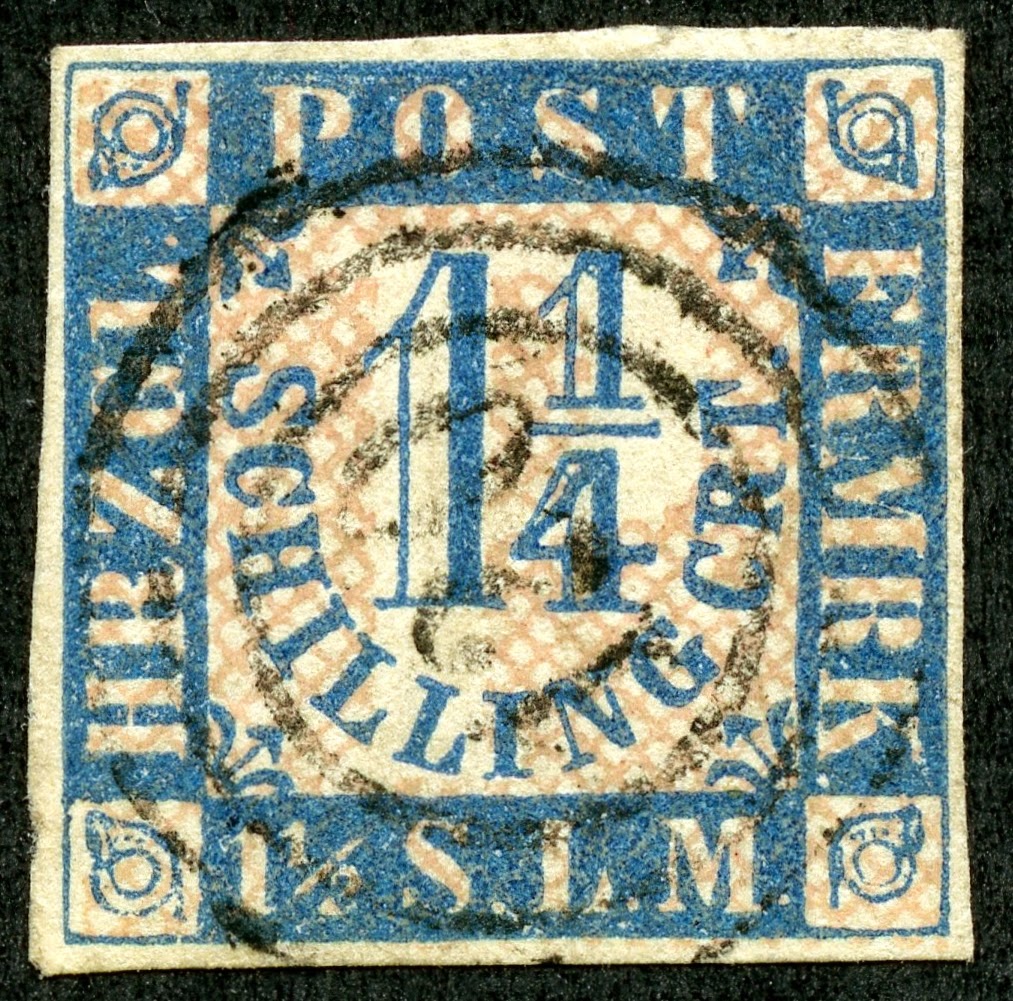 Holstein 1864 Scott 18 1 1/4s blue & rose
Quick History
The Duchies of Schleswig and Holstein were located between Denmark and Germany on the southern Jutland peninsula. The area served as an important  transfer point for goods and materials between the North Sea and the Baltic Sea.

As one can imagine, there developed conflict between the two nations over "ownership" of the lands. 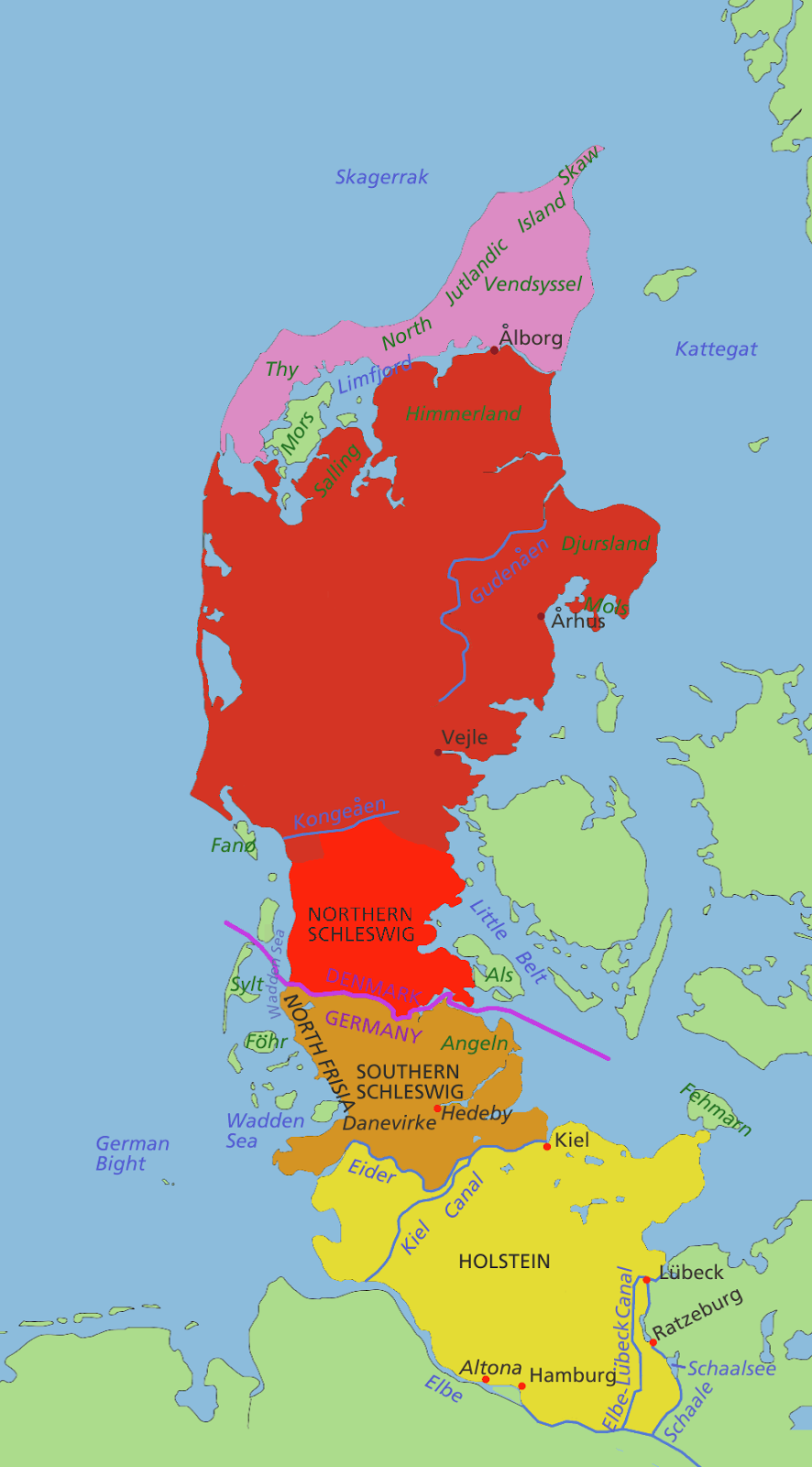 The Jutland Peninsula
Holstein (yellow); Schleswig (brown & red)
(This map additionally shows the 1920 Plebiscite results for Schleswig)
Both the Duchies of Schleswig and Holstein were, for centuries, fiefdoms of the Danish Monarchy. They also came under the administration of Danish government officials.

But, in 1815, Holstein joined the German Confederation (1815-66), and hence the "Schleswig-Holstein Question" arose about the tangled relationship. 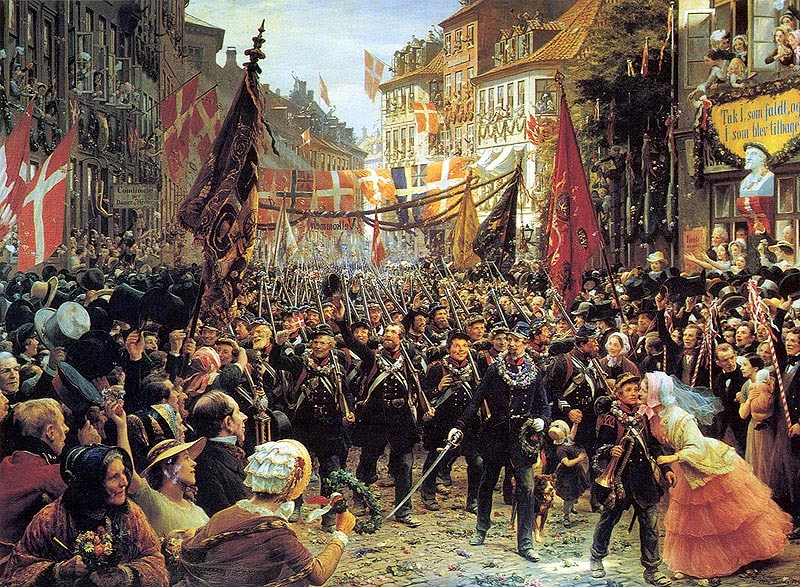 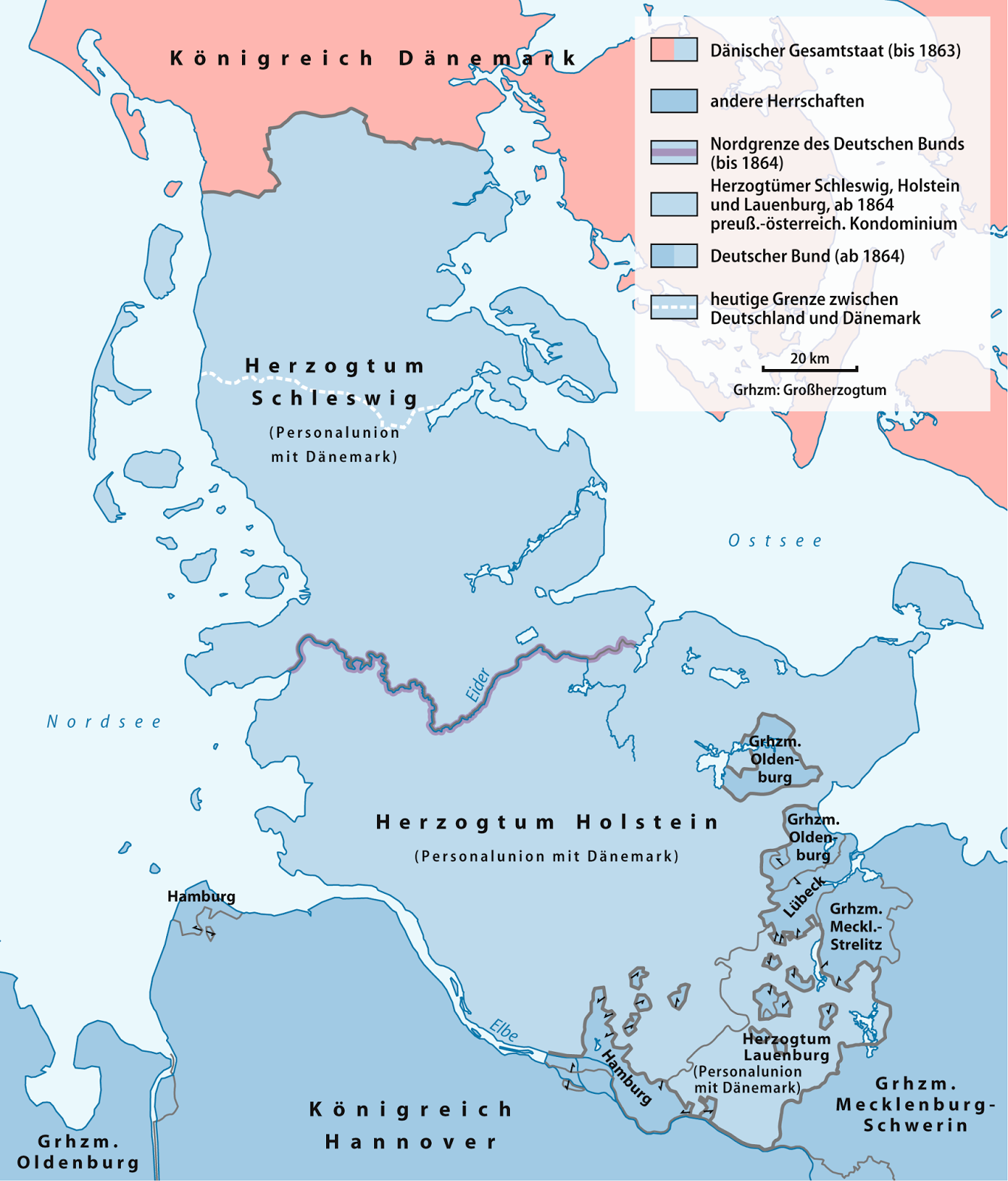 Boundary changes after the Second Schleswig War
Treaty of Vienna October 30, 1864
But the friction between Danish and German nationalism continued to grow, which lead to the 1864 "Second Schleswig War" with Denmark vs Prussia and Austria as combatants. Defeated, Denmark gave up control of the Schleswig and Holstein Duchies.

But conflicts arose between Prussia and Austria, leading to the 1866 Austro-Prussian War. Prussia was the victor, and all of Schleswig-Holstein was annexed into the North German Confederation (under heavy Prussian leadership) on January 1, 1868.

The Danish/German conflict did not end there, of course. My prior post covered the Schleswig Plebiscite of 1920 (after WW I), in which the northern section of Schleswig reverted to Denmark. The border changes between Denmark and Germany remain the same today.

For a look at all the philatelic and historical changes to Schleswig-Holstein in diagram form, check out the fine Stamp World History website. 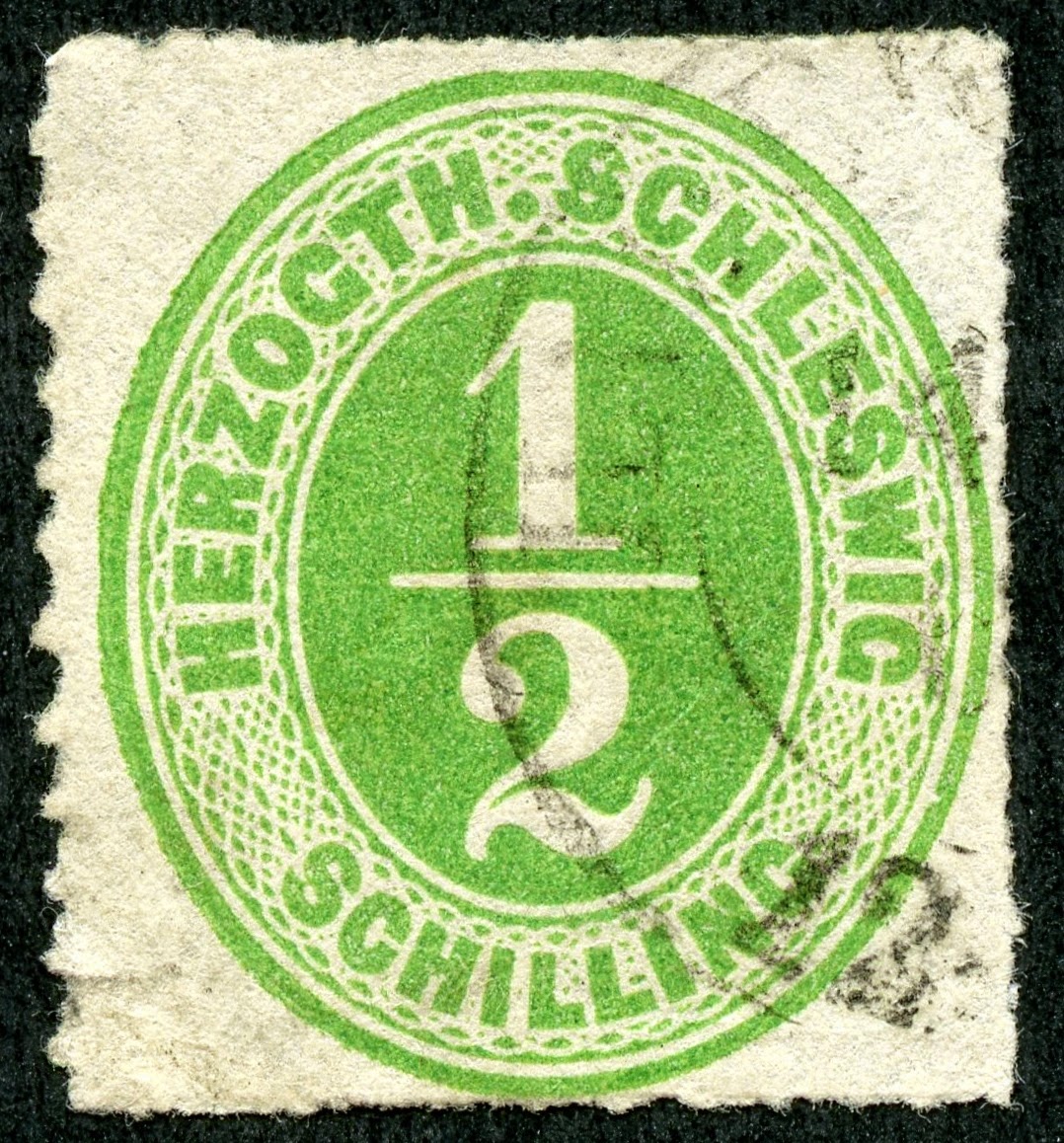 Schleswig 1865 Scott 10 1/2s green
Into the Deep Blue
The 2014 Scott Classic Specialized 1840-1940 catalogue has, for 1850-1866 Schleswig-Holstein, 25 major descriptive numbers. Of those, the least expensive are two @ CV $10+ and five @ CV $20+. Clearly, Schleswig-Holstein stamps are costly, but a representative selection should be possible for the WW collector. 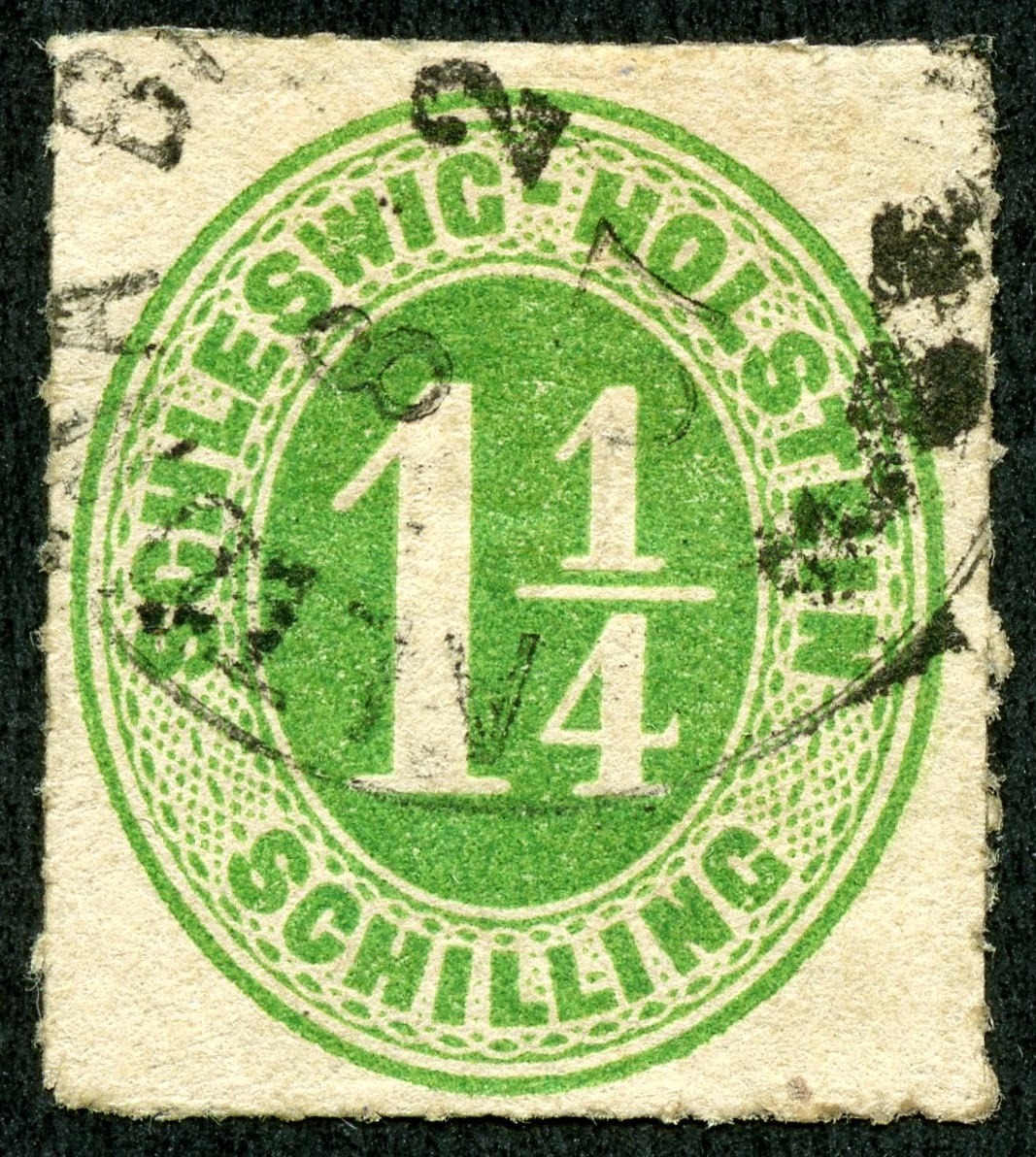 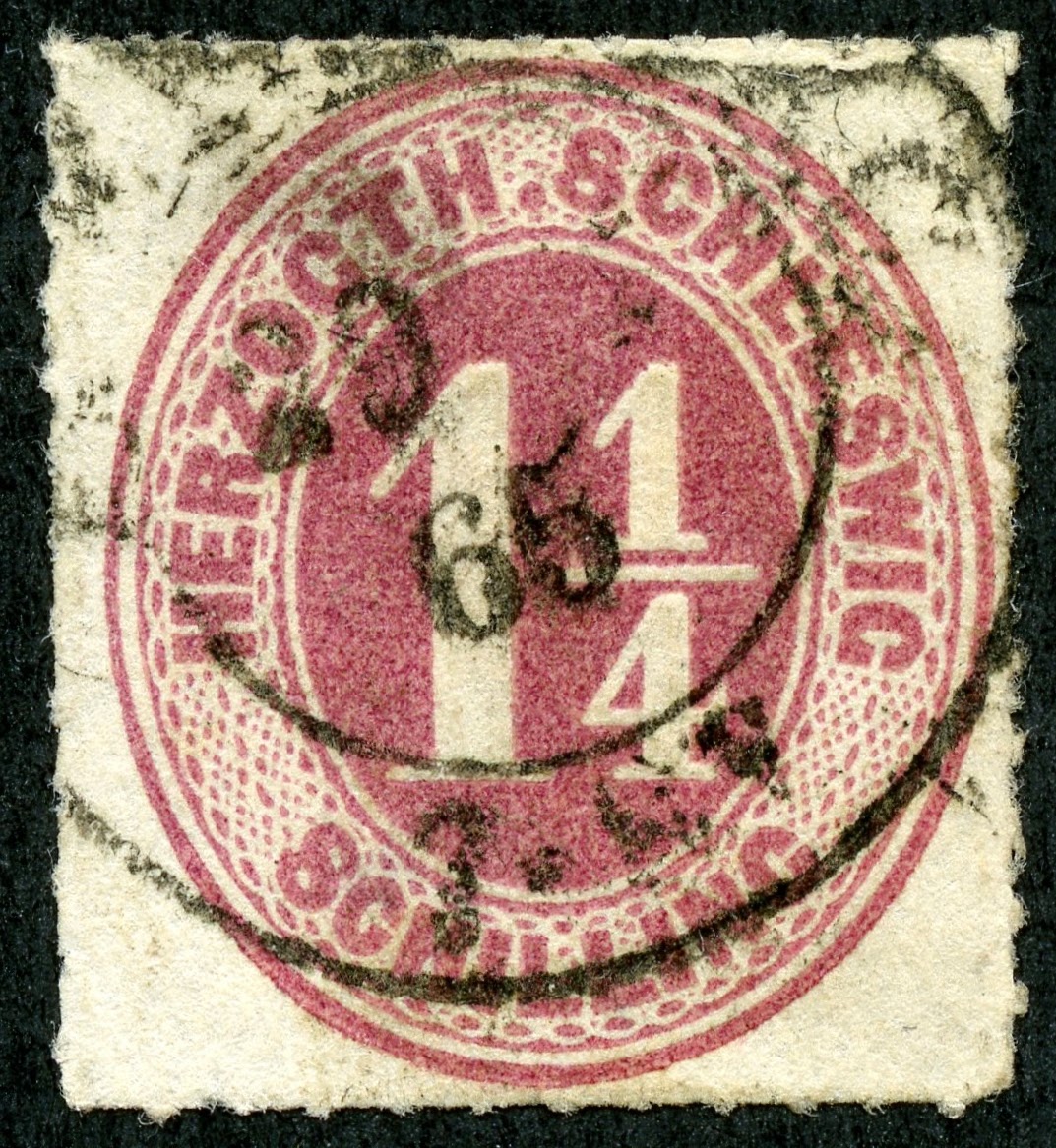 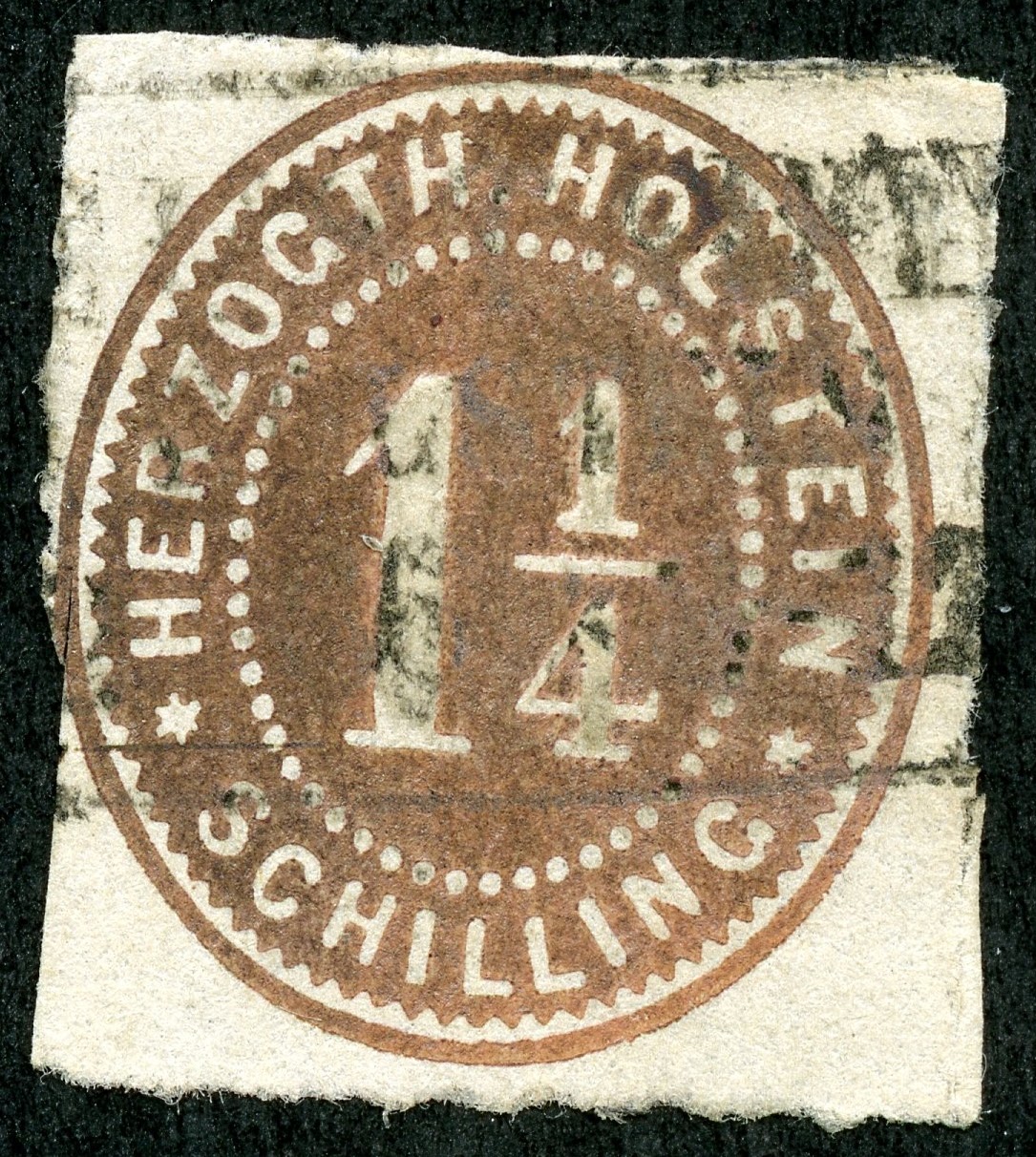 Of note regarding the Scott 20 1 1/4s stamp above: it appears to be a brown color, but Scott has the color listed as "red lilac".  ?? (chemical changeling?) 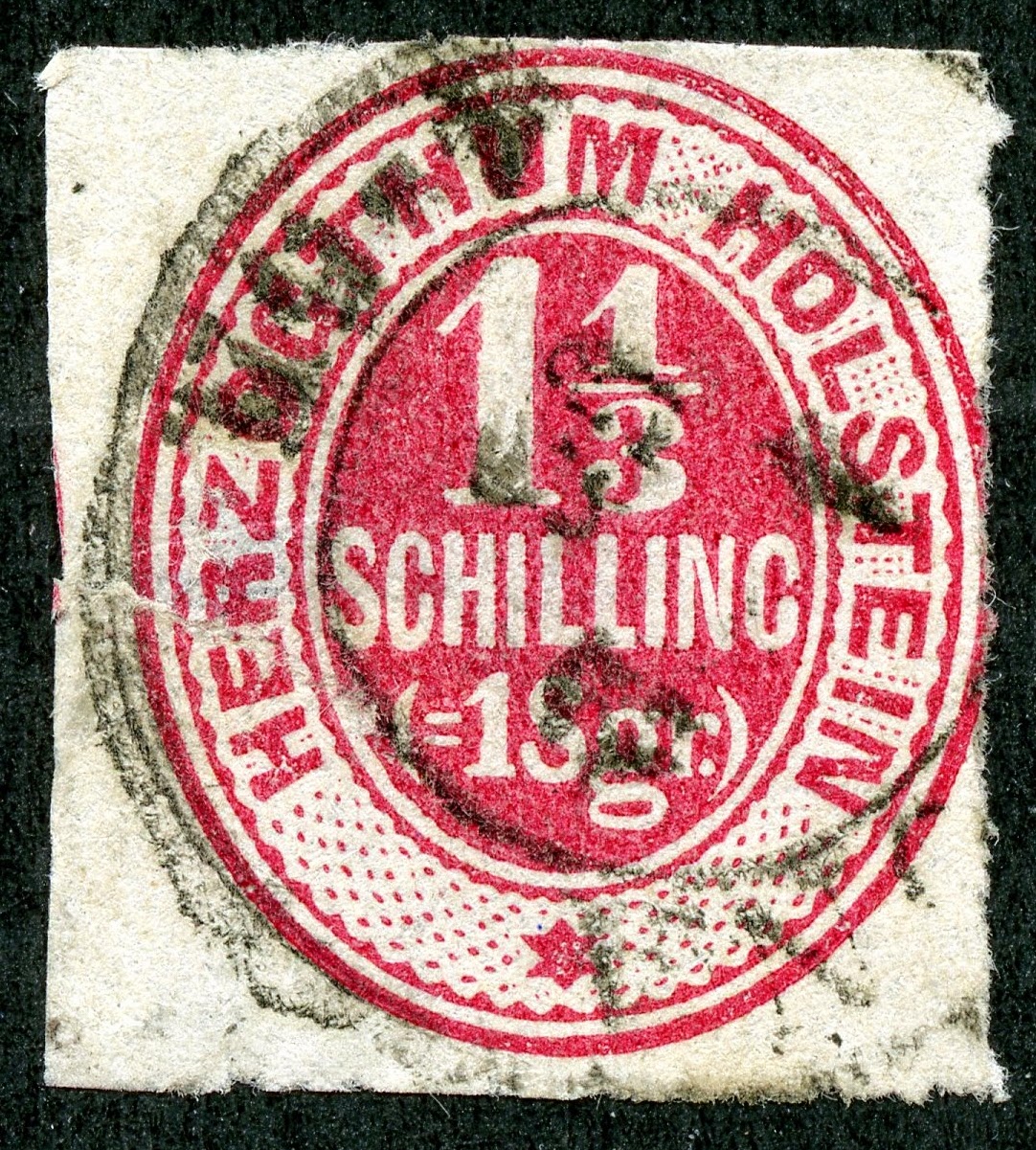 Holstein 1865 Scott 23 1 1/3s carmine
In 1865-66, Holstein additionally had a four stamp issue that was quite similar in appearance to the Schleswig 1865 stamps. The Holstein rouletted stamps had two designs: Note here the "duchy" word ("Herzogthum") is not abbreviated. ;-)

These "duchy" issues for Schleswig-Holstein were replaced by those of the North German Confederation on January 1, 1868. 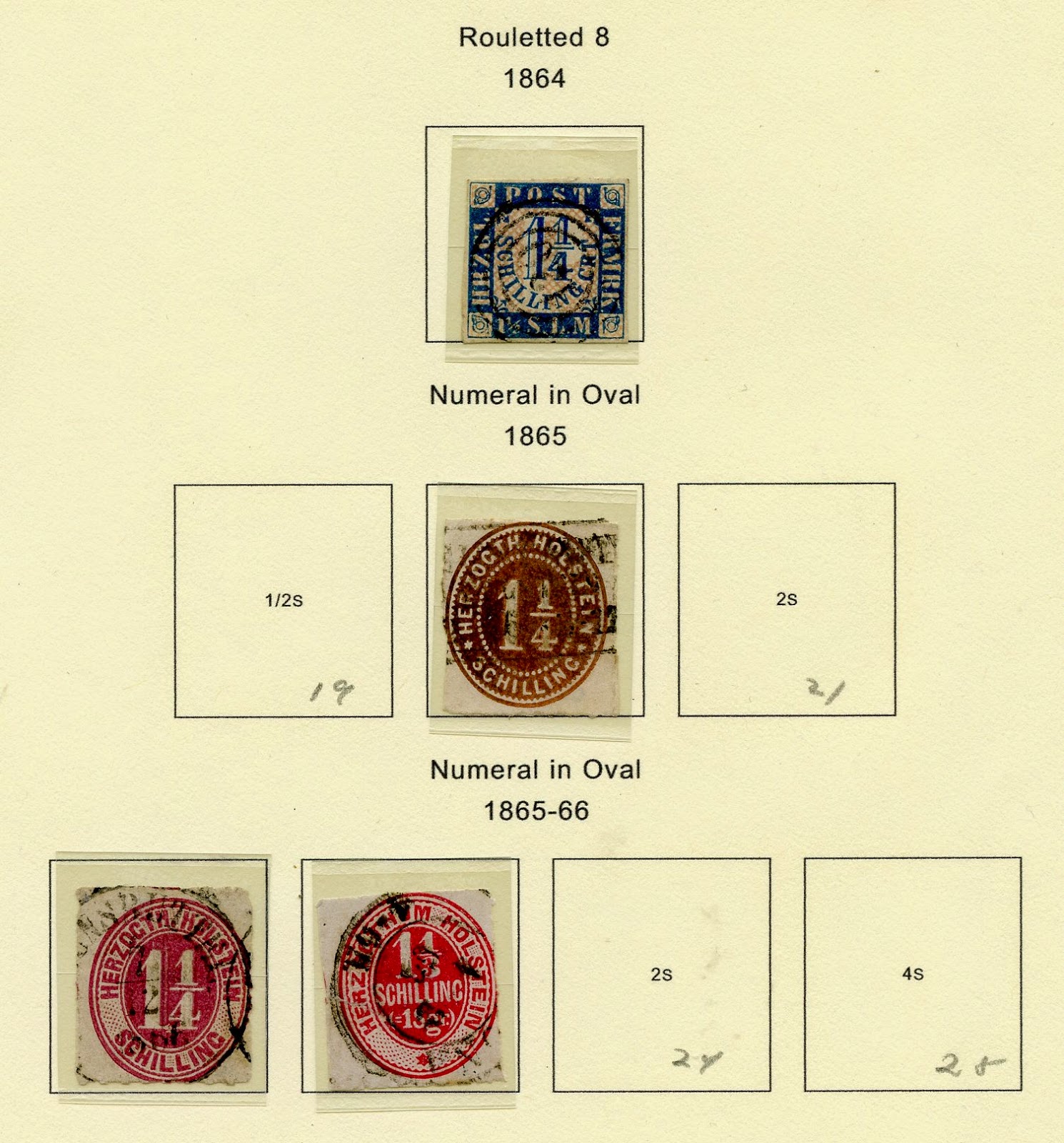 Holstein 1864-66 Issues in Deep Blue
Deep Blue (Steiner) has two pages for the stamps of Schleswig-Holstein. All of the major Scott numbers have a space.

Schleswig-Holstein in the Minkus Supreme
Big Blue
I wasn't planning to have a blog post about Schleswig-Holstein, because the Duchies have never been given a space in any edition of Big Blue. (True, the Schleswig plebiscite stamps have spaces, but that was after the duchy era.)

But I've made exceptions before (Annam & Tonkin), and there is no reason that the Duchies should not have been included in BB - their stamps are no more expensive than other German States. 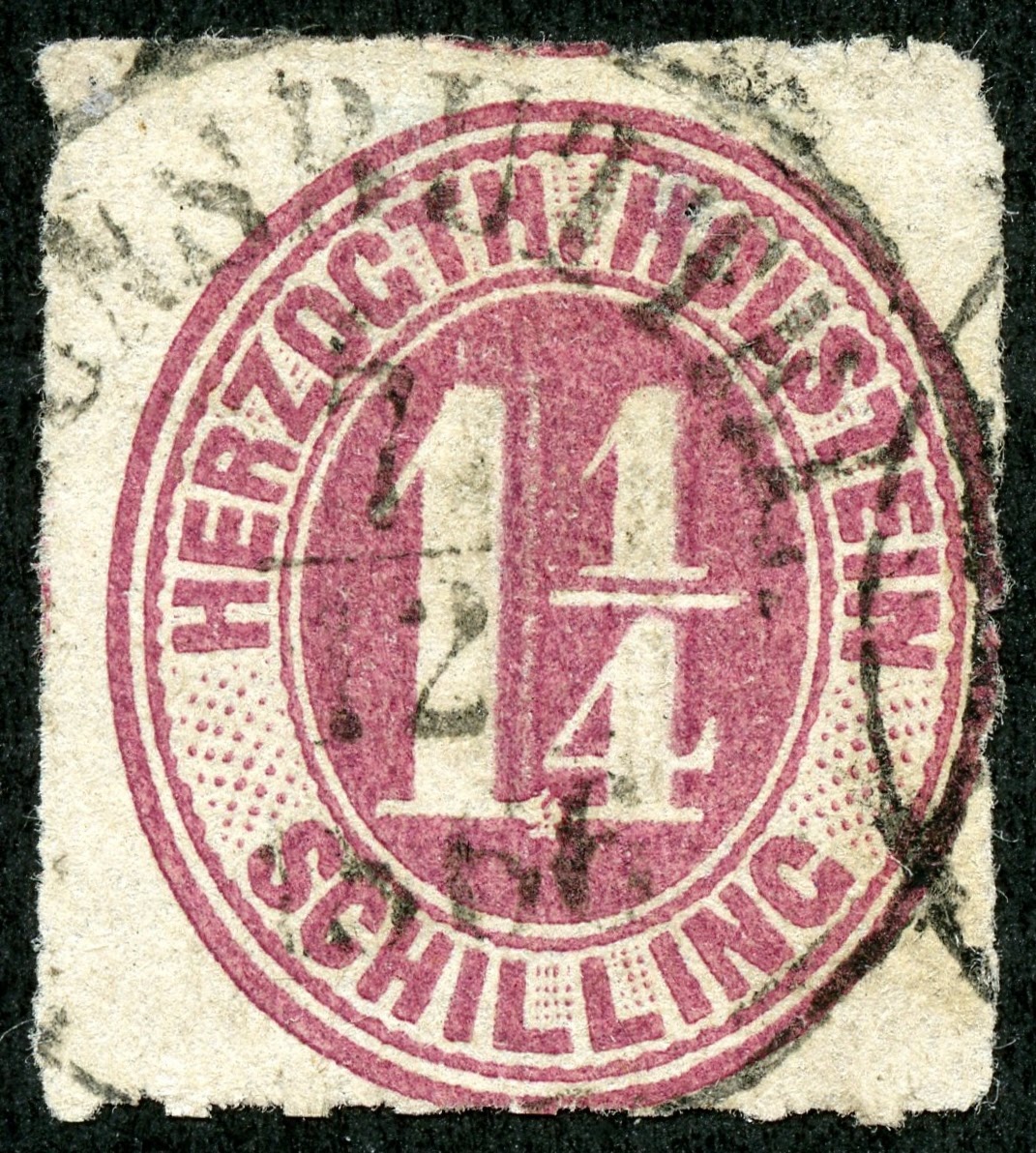 Holstein 1866 Scott 22 1 1/4s red lilac
Out of the Blue
It is unclear why BB never included the Schleswig-Holstein duchies stamps. Certainly, they are as deserving as the other German States that were given a space in the 1940s editions. (But as we know, many of the German States then lost their spaces in the '69 edition.)

Note: Maps and Otto Brache painting image appear to be in the public domain.

Comments appreciated!
Posted by Jim at 11:15 AM