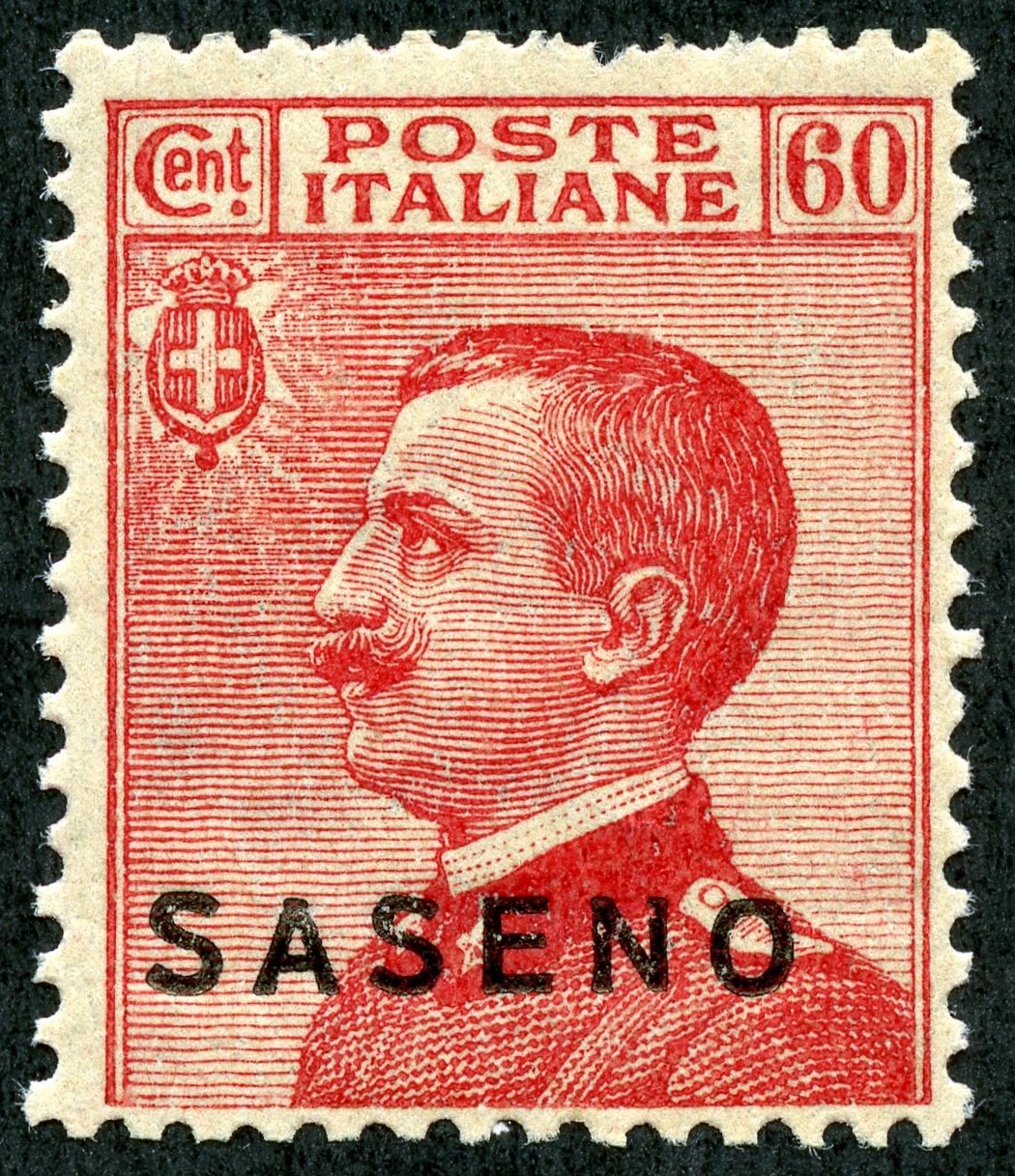 1923 Scott 7 60c carmine
Italian Stamps of 1901-22 Overprinted
Quick History
Saseno (Italian) or Sazan (Albanian) is an island, 3 miles long  by 1.7 miles wide, located between the lower Italian peninsula and present day Albania in the Strait of Otranto between the Adriatic Sea and the Ionian Sea. 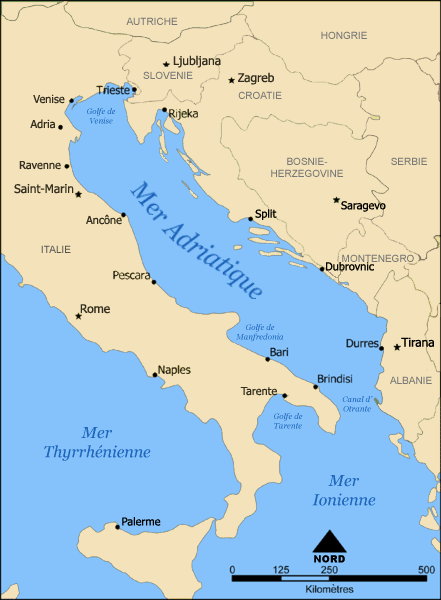 Adriatic Sea and Ionian Sea
Between is the Strait of Otranto (Canale d'Otranto)
The island was ceded to Greece with the other Ionian islands by Britain in 1864. But Greece did not formally occupy the island until 1912 with the First Balkan War. 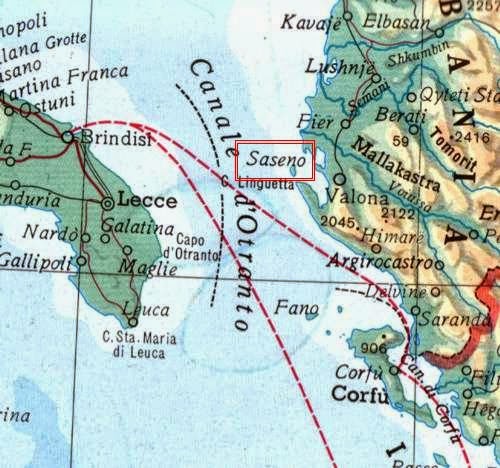 Saseno Island and the Strait of Otantro
After the end of the Second Balkan War in 1913, Greece evacuated Saseno and the southern parts of (now modern) Albania at the insistence of Italy and Austria-Hungary.

Saseno was part of Italy from 1920 until WW II. It had several Naval fortifications on the island, a lighthouse, and a few fisherman families as inhabitants. 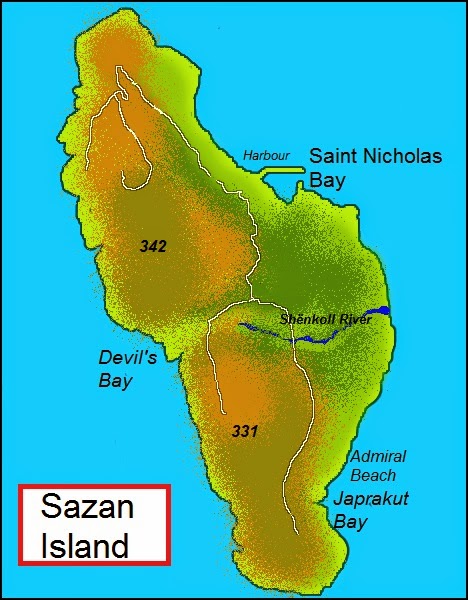 Saseno (Sazan)
During the Italian period (1920- WW II), stamps of Italy were used on the island. But in 1923, a group of eight definitive Italian stamps, showing the visage of King Victor Emmanuel II, were overprinted "saseno" by the Saseno post office for use locally. 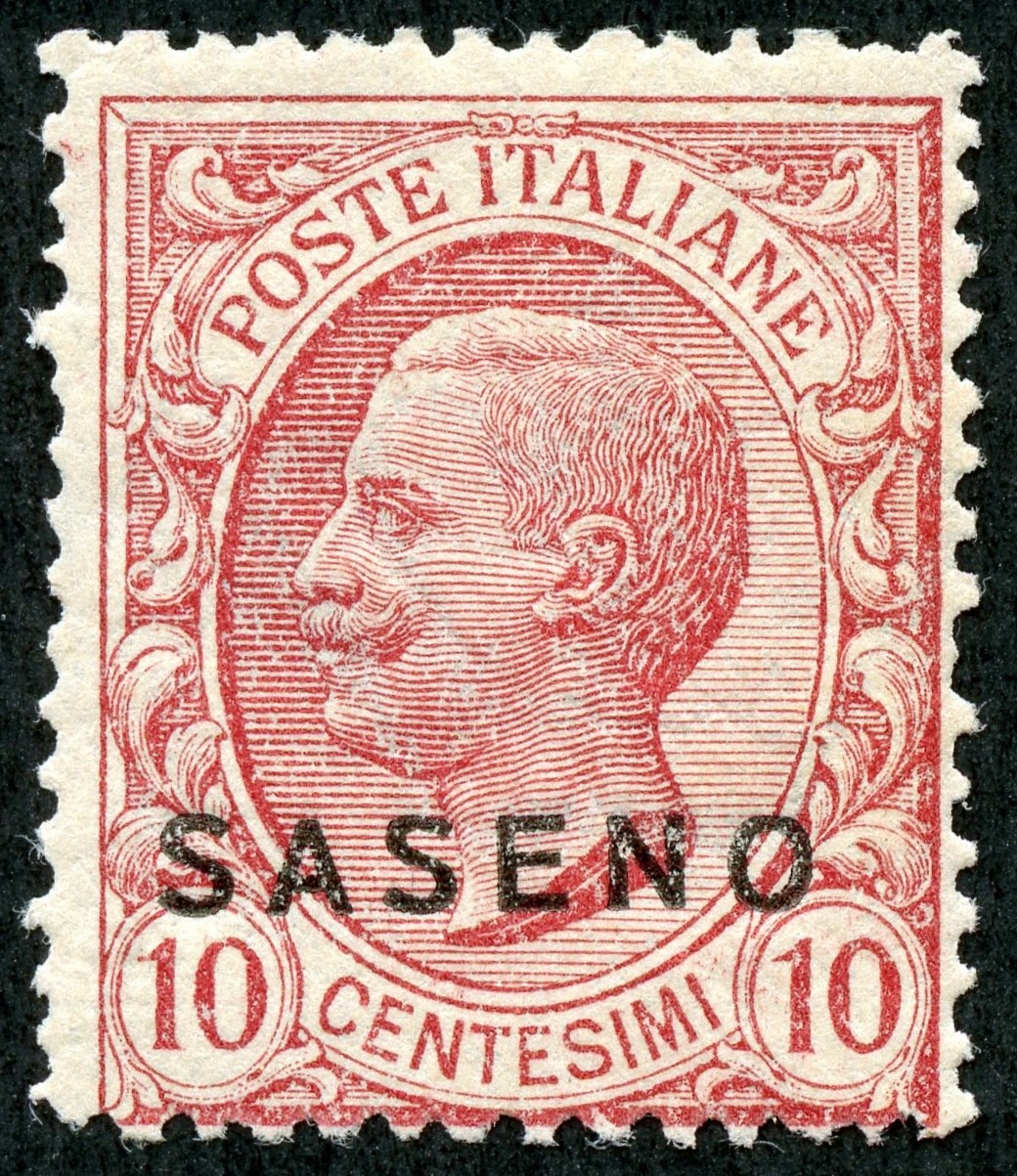 1923 Scott 1 10c claret
Into the Deep Blue
The 2014 Scott Classic Specialized catalogue has, for Saseno 1923, eight major stamp descriptions. All of the stamps are CV $30 for unused. Clearly, Saseno overprinted stamps are not inexpensive. Scott has a note that the "used" CV value ($80+) are for genuinely postally used, not CTO.

A closer look at the stamps
100 Centesimi = 1 Lira 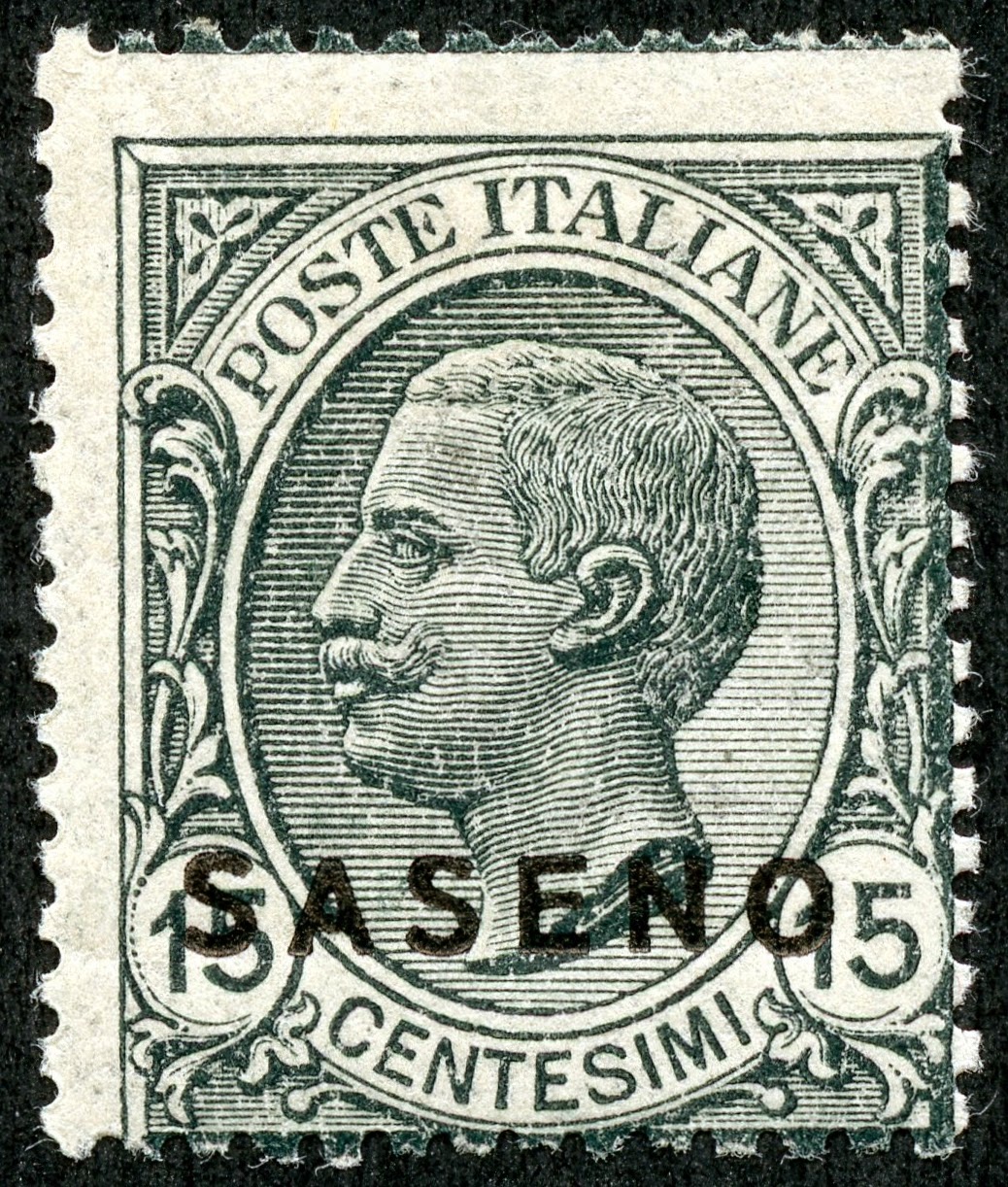 1923 Scott 2 15c slate
Italian Stamps of 1901-22 Overprinted
Only the 1923 issue of eight overprinted stamps of Italy are found in the catalogue under Saseno. Otherwise, regular stamps of Italy were used.

As one can imagine, fraudulently overprinting a stamp is much easier than developing a new stamp forgery.

Now, I have no specific reason to suspect that these overprints are not genuine. They were bought from a reputable source- but that only goes so far.

Sending them in for certification would be a minimum of $25 per stamp.

And expert knowledge about overprint forgeries tends to be locked up- and not shared widely- among country specialists.

So what is a WW generalist to do- just be lambs to the slaughter?

Well, here are some strategies that can be used.....

* I know of one WW classical era collector with a very healthy collection that simply refuses to collect expensive overprinted stamps.

* If the overprinted stamps are inexpensive, of course one can accumulate them- the potential damage is minimal.

* Get the overprinted stamps certified. (Only really works economically for quite expensive stamps.)

* Try to obtain the knowledge for oneself regarding overprint forgeries. Or, ask a specialist acquaintance or internet source for help. 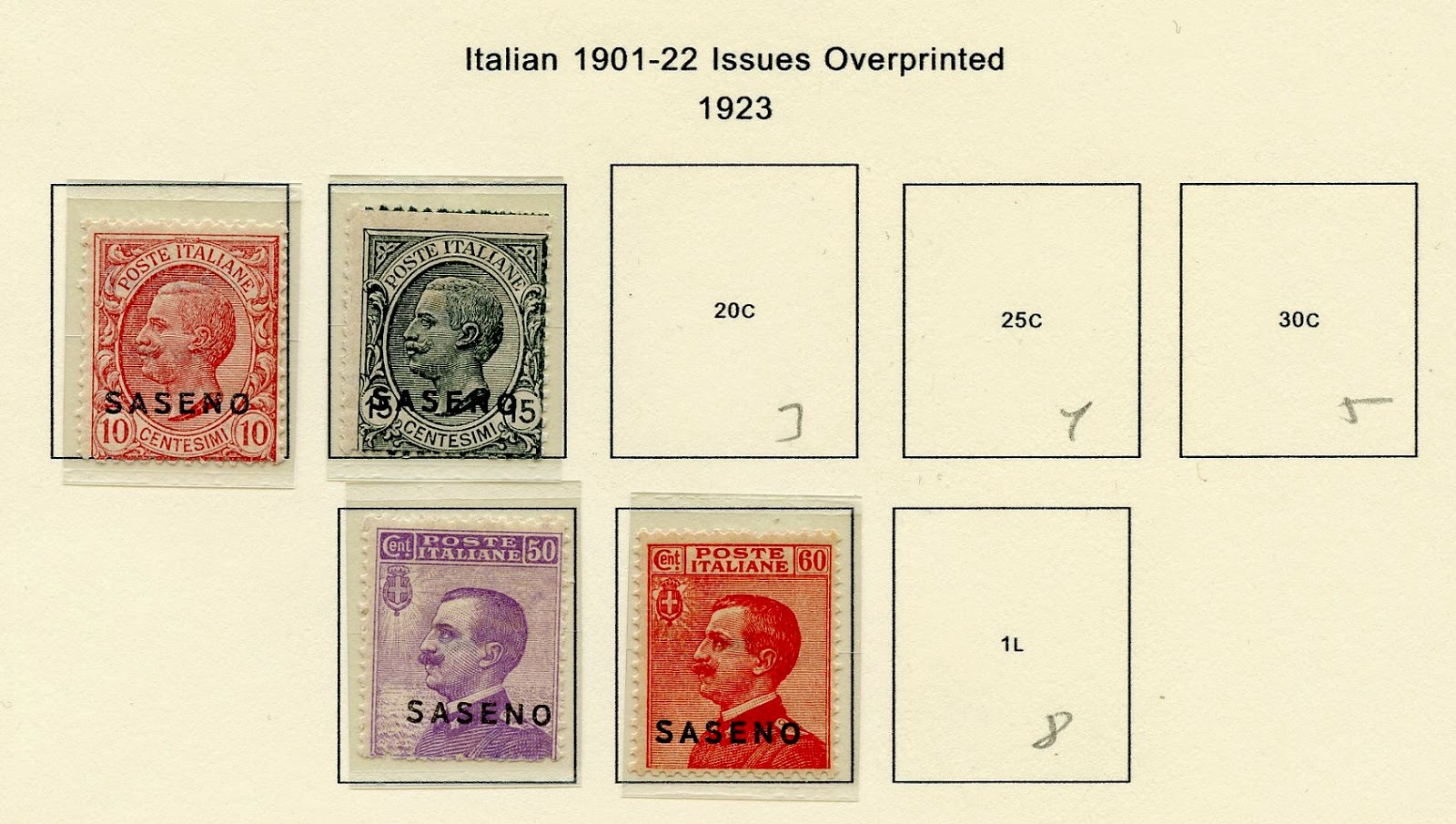 1923 Issue in Deep Blue
Of course, Deep Blue (Steiner) has all the spaces for the 1923 Saseno issue.

Saseno in the 1940s editions Big Blue
Big Blue
Saseno was one of those smaller stamp issuing territories that was eliminated by the 1969 editors of Big Blue. Although I am not in favor of dropping stamp issuing areas, the stamps are expensive @ CV $30 apiece.

The 1940s editions have six spaces for Saseno stamps- a very generous 75% coverage.

The Saseno coverage is located (along with several other small countries) between Sarawak and Senegal. 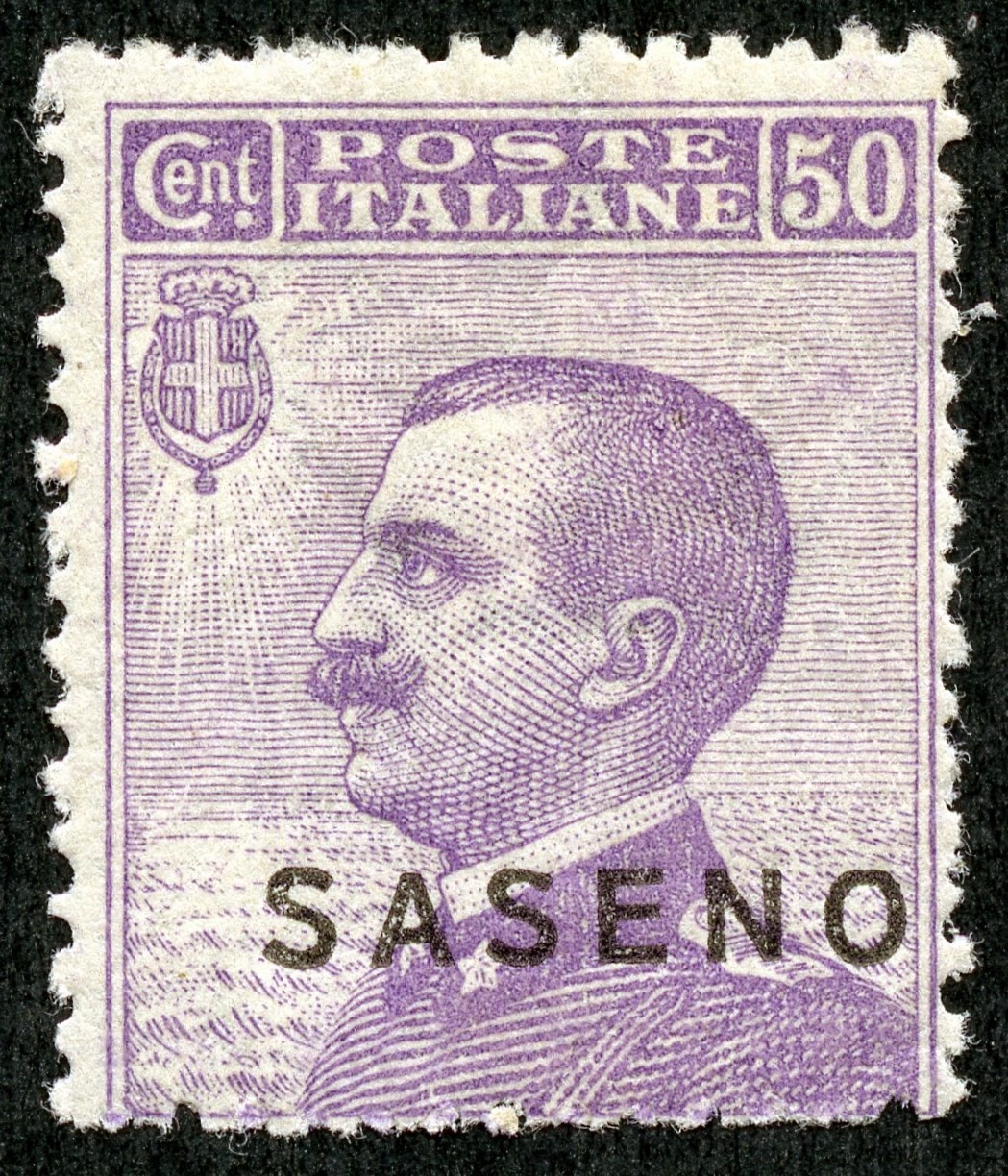 1923 Scott 6 50c violet
Out of the Blue
For a "Representative Album", Big Blue is inordinately fond of providing generous coverage of Italian sphere stamps. Unfortunately, many are also fairly expensive.